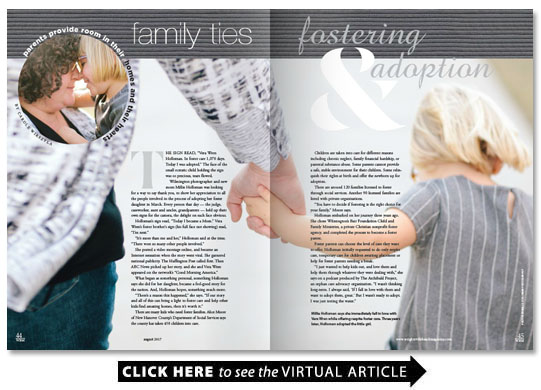 The sign read “Vera Wren Holloman. In foster care 1 070 days. Today I was adopted.” The face of the small ecstatic child holding the sign was so precious tears flowed.

Wilmington photographer and new mom Millie Holloman was looking for a way to say thank you to show her appreciation to all the people involved in the process of adopting her foster daughter in March. Every person that day — the judge caseworker aunt and uncles grandparents — held up their own signs for the camera the delight on each face obvious.

“It’s more than me and her ” Holloman said at the time. “There were so many other people involved.”

She posted a video montage online and became an Internet sensation when the story went viral. She garnered national publicity. The Huffington Post called first. Then ABC News picked up her story and she and Vera Wren appeared on the network’s “Good Morning America.”

What began as something personal something Holloman says she did for her daughter became a feel-good story for the nation. And Holloman hopes something much more.

“There’s a reason this happened ” she says. “If our story and all of this can bring a light to foster care and help other kids find amazing homes then it’s worth it.”

There are many kids who need foster families. Alice Moore of New Hanover County’s Department of Social Services says the county has taken 450 children into care.

Children are taken into care for different reasons including chronic neglect family financial hardship or parental substance abuse. Some parents cannot provide a safe stable environment for their children. Some relinquish their rights at birth and offer the newborn up for adoption.

There are around 120 families licensed to foster through social services. Another 90 licensed families are listed with private organizations.

“You have to decide if fostering is the right choice for your family ” Moore says.

Holloman embarked on her journey three years ago. She chose Wilmington’s Bair Foundation Child and Family Ministries a private Christian nonprofit foster agency and completed the process to become a foster parent.

Foster parents can choose the level of care they want to offer. Holloman initially requested to do only respite care temporary care for children awaiting placement or help for foster parents needing a break.

“I just wanted to help kids out and love them and help them through whatever they were dealing with ” she says on a podcast produced by The Archibald Project an orphan care advocacyorganization. “I wasn’t thinking long-term. I always said ‘If I fall in love with them and want to adopt them great.’ But I wasn’t ready to adopt. I was just testing the water.”

“I fell in love with her immediately. As soon as her feet crossed the threshold of my front door she flew right into my heart ” Holloman says. “I went back to the agency and said ‘If she comes up for adoption I want to adopt her.'”

That wouldn’t happen for a while. In the meantime she decided to go beyond respite care and accept long-term placements. She proceeded to foster eight kids ages 4 days to 20 years old in three years.

They included a 16-month-old boy and a 5-week-old girl she parented for nine months. She accepted the children reluctantly. As a single parent and successful businesswoman she didn’t know if she could provide the right level of care for a toddler and a baby.

Yet she fell in love with them and was ready to adopt. Both though were taken in by relatives and she had to go through the painful process of saying goodbye.

“It’s the hardest thing I’ve ever done ” she says. “I still miss those kids. But I know I made a difference in their lives and you have to hang onto that. I gave them a start in their life they might not have had otherwise.”

Moore hears similar stories from other foster parents. She says although fostering can be a tough job most people called to it not only provide room in their homes they also have room in their hearts to provide a safe loving nurturing environment for children and babies in care.

Holloman knew becoming a foster parent — with the ultimate goal of adopting — was the right thing to do. However she says no foster parent ever feels fully prepared for the first placement.

Holloman compares her emotional experience with a rollercoaster ride; however she learned that happy and sad can coexist.

“If you don’t give it everything you have then you’re not doing it right ” she says. “It should hurt every time they have to leave. That means you’re doing it right.”

While the foster system is painful for adults when they have to say goodbye it can also be traumatic for the children.

Chris Montgomery was a sixth-grader at Williston Middle School when he went into foster care. He arrived home from a friend’s birthday party when his mom told him “They’re going to come and get you.”

The department of social services kept him in the dark about his case. Montgomery says no one ever told him why he was separated from his mother. He had many questions and received few answers as he bounced from one group foster home to the next. Eventually social services settled him at the Boys and Girls Home of North Carolina in Lake Waccamaw.

It was a tumultuous time for Montgomery who after almost three years was reunited with his mother. He was glad to be back home but resented the fact that social services did not give him the opportunity to voice his feelings throughout the process.

“The system is broken ” he says.

Perhaps it was because he never had a permanent foster family. Or maybe it was because his sister was placed with a family whose own children they both knew while he remained in the group home. Whatever the reason throughout the process he couldn’t help but think “What about me?”

Teenagers taken into care are notoriously difficult to place with foster families because they come with a lot of emotional baggage peppered with the normal growing pains of development and hormones. Moore says this is why teenagers often end up in group homes.

Reunification within 12 months is the department of social service’s goal for children removed from their birth families. Even though it took longer in Montgomery’s case the outcome was successful.

Montgomery knew he wasn’t a perfect child. But in hindsight he recognizes the important contributions of all the foster parents especially the male figures who taught him many things he wasn’t getting at home where he grew up without knowing his father.

They helped set him on a course that ended with a college degree. Montgomery recently graduated from the University of North Carolina Wilmington with a degree in physical education. He is headed to Kuwait to be a PE teacher at the boys’ campus of an elementary school. He plans to stay there for a couple of years and then pursue a master’s degree in psychology.

“I learned different life lessons that have helped me today ” he says.

When family reunification isn’t possible fostering is about permanency which can lead to adoption. But Sarah Chamberlain a former foster care social worker in western North Carolina’s Watauga County says it can be a challenge to settle a child with one family.

“Behavioral issues may result in a child having multiple foster parents ” she says.

She also says this is why social workers look for a relative before seeking foster parents.

Mary Cato the 32-year-old owner of Chubby Cheeks Child Care in Wilmington was adopted at 2 months old. She’s biracial and was the only child of color adopted into an all-white family. She was the result of an extra-marital affair and struggles with the fact that her birth mom was 27 at the time yet gave her up for adoption.

She says her adoptive mom was very negative about her birth family which put a strain on their relationship. Throughout her life she felt being adopted was very isolating and says she became a people pleaser who struggled with rejection.

“I just wanted to feel loved and wanted ” she says.

Moore says people seeking to foster or adopt children need to be loving nurturing and flexible and have a lot of patience.

Rachelle and Bill Dries chose to foster and adopt when they discovered they couldn’t have a child of their own. They knew from the outset that they wanted a child to keep and desired an infant. They went through a lengthy vetting process with the North Carolina Children’s Home Society and were told they might have to wait up to two years for a baby. In reality it happened in one month.

“We believed from the outset that she was meant to be our child ” Rachelle says.

They chose an open adoption — the birth parent knows who the adoptive parents are — and opted to take full legal risk during the first week after the birth. This meant that during the seven-day period when the birth mother can change her mind they were allowed to take the baby home instead of having her taken into temporary foster care.

The toughest part for Rachelle was leaving the hospital.

“I had no idea the depth of emotion I would feel watching the birth mom say goodbye to the baby ” she says.

They took a leap of faith and it turned out fine. A couple of years later they adopted another baby girl privately. There were some bumps along the road and Rachelle and Bill helped the mom with her expenses and donated to Wilmington’s Domestic Violence Shelter and Services Inc.

They have good relationships with both the birth moms and want the girls now ages 12 and 10 to meet them and ask questions when they are ready. They meanwhile reassure them “The decision [to give their children up for adoption] was made out of love.”

The adoption process can be challenging but for people considering adoption Rachelle says to not let fear outweigh the joy.

Cato says she strives to be the mom she wanted to have. Counseling has helped her come to terms with her adoptive journey. Although she says “I never had a voice in my own story ” she advises parents who foster and adopt not to try to fix their children’s feelings but to give them a safe place to express them.

There will be tough moments and there will be heartache. But as Holloman said on “Good Morning America ” it is worth it.

“I hear a lot of people when I tell them I’m fostering say they could never do it it’s just too hard ” she says. “It is hard. I’ve had a lot of kids leave and it’s tough to see them leave. But it’s also really rewarding. We get to make a difference in the kids’ lives.”

She unquestionably made a difference in the life of Vera Wren who was 2 when Holloman took her in for respite care. Holloman soon became her full-time foster parent and mothered her for a year before the child was available for adoption.

Holloman says it felt very isolating knowing she wanted Vera Wren but didn’t want to get too emotionally involved until the court granted the adoption. It was some time before the parents relinquished their rights so Holloman sought and found support from a foster moms’ group connected to The Bair Foundation.

Holloman her brother and her sister-in-law used their photography skills to capture images of the people involved in the process the day Vera Wren was officially adopted. Holloman is likely to do it again if she’s able to adopt the little boy she’s also been fostering.

People say how lucky the kids are to have a foster family but Holloman knows she is fortunate to have the children.