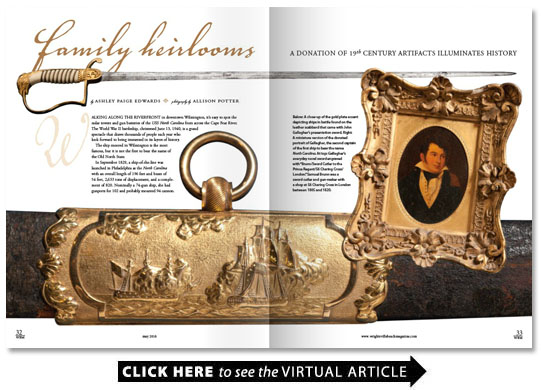 Walking along the riverfront in downtown Wilmington it’s easy to spot the radar towers and gun batteries of the USS North Carolina from across the Cape Fear River. The World War II battleship christened June 13 1940 is a grand spectacle that draws thousands of people each year who look forward to being immersed in its layers of history.

The ship moored in Wilmington is the most famous but it is not the first to bear the name of the Old North State.

In September 1820 a ship-of-the-line was launched in Philadelphia as the North Carolina with an overall length of 196 feet and beam of 54 feet 2 633 tons of displacement and a complement of 820. Nominally a 74-gun ship she had gunports for 102 and probably mounted 94 cannon.

She was the creme de la creme really ” says Mary Ames Booker museum curator at the Battleship North Carolina. “She was a big ship for her day very deep draft.”

Sailing in the Mediterranean fleet from 1824 until 1827 as Commodore John Rodgers’ flagship the deep draft (21.6 feet) three-masted square-rigger helped establish the nascent country as a naval power.

In 1836 the refitted North Carolina was scheduled to go off the coast of South America under her second captain John Gallagher.

Booker knew from naval records that Gallagher officially was the ship’s second captain but he’s been something of a man of mystery.

The historic record shows the ship did patrol off the Pacific coast to protect U.S. commerce while Chile and Peru were at war. Gallagher though was not onboard. He resigned after only serving for three months.

“He didn’t go as captain on that South American cruise ” Booker says. “I found some newspaper reports — a lot of stuff’s been digitized — that said his wardroom officers were very sorry that he backed out. It doesn’t really explain why. I think he was not well or maybe he just didn’t want the cruise. We didn’t know anything.”

The North Carolina became a training ship when she returned to New York in 1839 and Gallagher was placed back in command.

“He really warmed to the idea about the training of recruits and how you train these young people to be in the Navy. So apparently it was a good fit ” Booker says.

Gallagher served until his death in 1842. The cause of his death is another mystery. A newspaper obituary said he “suffered a disease both mental and physical ” but the type of disease was not revealed.

With so many unknowns swirling around the second captain Booker was skeptical when a man named Lawrence Pleasants called and said he was a direct descendant of John Gallagher and had some artifacts he was interested in donating.

“When I got a phone call that said ‘I have items related to Captain Gallagher of the ship ‘ I’m like ‘You don’t know what you’re talking about.’ Very polite of course ” Booker says.

After doing some more digging Booker realized the artifacts were legitimate. She called Pleasants and made arrangements to acquire the historic treasures: a large portrait of Gallagher a painting of the North Carolina Gallagher’s naval sword a ceremonial sword from his home state of Maryland and a silver commemorative medal awarded by President Andrew Jackson.

The artifacts had been in Pleasants’ family for 150 years. With each generation they always went to the oldest son which is how Pleasants — Gallagher’s great-great-great grandson — came into possession of them a little over 20 years ago.

After keeping them tucked away Pleasants felt it was time to make them available.

The reality of it is that stuff goes into the closet ” Pleasants says. “We had the large portrait over our fireplace but you don’t put a sword like that on a mantle. So it spent its time in the closet and it’s time for it to be seen and shown.”

Pleasants and his wife moved to Southport a year and a half ago after living in Cashiers North Carolina for 20 years.

“When we moved to Southport we learned that there was a Battleship North Carolina 30 miles away ” Pleasants says. “We decided that it would be an absolute perfect fit.”

After Pleasants coordinated with Booker the two portraits the swords and the medallion were moved to the Battleship North Carolina Museum located in the visitors center.

The portrait of Gallagher sits in a gilded frame slightly separated from the painting due to years of display above a fireplace. A miniature version of the portrait is on display in a case at the museum alongside the presentation sword that the governor of Maryland gave to Gallagher in 1833.

The Journal of the Proceedings of the House of Delegates of the State of Maryland states the sword was a “testimony of the admiration and gratitude of their native state for his distinguished gallantry and highly valuable service during the last war with Great Britain.” It came with a black leather scabbard. “The President Engaging the Endymion” is etched on the blade a reference to a naval battle during the War of 1812.

“It’s in beautiful condition even the scabbard ” Booker says. “That leather is pretty old and we have the original case too. This stuff just doesn’t survive this long.”

Gallagher’s everyday naval sword that he would have used during his service aboard the North Carolina is displayed in another case. The top locket is engraved with “Brunn/Sword Cutler to the Prince Regent/56 Charing Cross/London.” It has an eagle’s head pommel and a white polished ivory grip bound with gilt wires.

Alongside the sword is a painting of the ship by Gallagher’s friend Lieutenant Henry Walke. The inscription on the painting reads “Capt John Gallagher 1840.” It depicts the North Carolina in the New York harbor alongside other ships.

Pleasants also donated a silver medal one of a series of 27 commemorating American successes during the War of 1812. They were awarded to the officers for their action between the United States and the HMS Macedonian a naval battle that occurred in October 1812. The medals were struck by a special resolution of Congress.

One side of the medal depicts a bust of Commodore Stephen Decatur an early naval hero. The other side depicts the two ships in battle. Engraved on the edge of the medal is “Presented by the President of the US to LT John Gallagher Agreeable to the Act of Congress.” Over Decatur’s bust there is a Latin inscription meaning “Naval captain Stephen Decatur victor in many battles.”

It may be in great condition but the medal has been through a battle of its own. Pleasants recalls a time when his mother would hang it on the wall but when she would leave home she would hide it in the garbage disposal.

“She came home once and turned it on and it went clink clink clink so it got beat up a little bit ” Pleasants says chuckling.

He laughs about how everything else stayed in such great condition.

“I put it in the closet and closed the door ” he says.

The donation will provide the public with more information about the first North Carolina and early American naval history broadening the knowledge for younger generations. Pleasants hopes it also motivates people his age.

“It was important to my generation and my generation has a lot of this stuff in closets ” he says. “And maybe they’ll see that and say ‘Oh gosh we can give something also ‘ and so it will be a learning experience for when young people go there.”