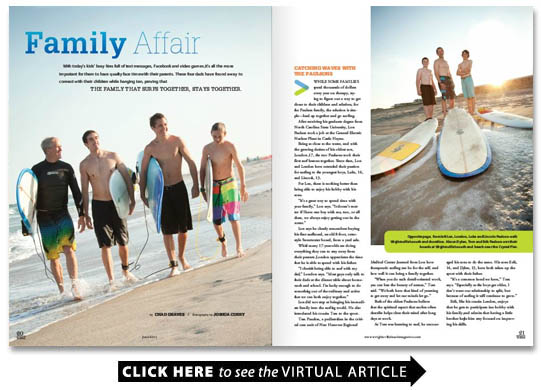 With todays kids busy lives full of text messages Facebook and video games its all the more important for them to have quality face time with their parents. These four dads have found a way to connect with their children while hanging ten proving that the family that surfs together stays together.

Catching waves with the Paulsons

While some families spend thousands of dollars every year on therapy trying to figure out a way to get closer to their children and relatives for the Paulson family the solution is simpleload up together and go surfing.

Being so close to the water and with the growing desires of his oldest son London 17 the two Paulsons took their first surf lessons together. Since then Lon and London have extended their passion for surfing to the youngest boys Luke 16 and Lincoln 13.

For Lon there is nothing better than being able to enjoy his hobby with his sons.

“Its a great way to spend time with your family ” Lon says. “It doesnt matter if I have one boy with me two or all three we always enjoy getting out in the water.”

Lon says he clearly remembers buying his first surfboard an old 8-foot retro-style Sweetwater board from a yard sale.

While many 17-year-olds are doing everything they can to stay away from their parents London appreciates the time that he is able to spend with his father.

“I cherish being able to surf with my dad ” London says. “Most guys only talk to their dads at the dinner table about homework and school. Im lucky enough to do something out of the ordinary and active that we can both enjoy together.”

Lon did not stop at bringing his immediate family into the surfing world. He also introduced his cousin Tom to the sport.

Tom Pauslon a pediatrician in the critical care unit of New Hanover Regional Medical Center learned from Lon how therapeutic surfing can be for the self and how well it can bring a family together.

“When you do such detail-oriented work you can lose the beauty of nature ” Tom said. “We both have that kind of yearning to get away and let our minds let go.”

Both of the eldest Paulsons believe that the spiritual aspect that surfers often describe helps clear their mind after long days at work.

As Tom was learning to surf he encouraged his sons to do the same. His sons Erik 14 and Dylan 13 have both taken up the sport with their father.

“Its a common bond we have ” Tom says. “Especially as the boys get older I dont want our relationship to split but because of surfing it will continue to grow.”

Erik like his cousin London enjoys that he gets to participate in a hobby with his family and admits that having a little brother helps him stay focused on improving his skills.

“I feel like he drives me a little bit ” Erik says. “I get to show off for him and it gives him something to look up to too. I like that I get to teach him.”

Despite so many boys being around the same age the Paulson family emphasizes that there is no competition just that they enjoy cheering each other on.

“Weve all had some remarkable experiences in terms of watching each other take a good wave ” Tom says. “You get that close-knit feeling with your kids when they catch a wave and you hold up 10 fingers in excitement ” Lon laughs. “Even if it was only a seven.”

Some kids begin playing sports at a young age. Dads throw baseballs to sons as they try to teach them the fundamentals of a swing. But for Brandon Mitchell his hobby started in the ocean as his father Mark Mitchell nudged him toward surfing from the age of four.

Mark says he began by setting his son on a small board at the waters edge. As the current passed Brandon thought he was surfing just like dad.

From that age on the Mitchells have used surfing as a way to stay close to each other and explore the waters as close as Wrightsville Beach and the Caribbean and as far away as Fiji.

Since Marks early days of surfing in the 1960s the sport has evolved into more of a family sport than it was when he started.

“The interesting thing is back in the 60s and 70s no ones mother or father surfed ” Mark says. “It was basically a bunch of your 10- to 14-year-old buddies who talked their parents into buying them boards then paddled out and didnt have a clue what to do.”

But Mark wanted to introduce the entire family to the sport. He has since lured his daughters Erica and Sophia onto boards and into the waves. But its father and son who enjoy the most time in the water together.

“Its been really rewarding for our relationship ” Mark says. “For him to be just as passionate about surfing as I am is great.”

Brandon a 14-year-old freshman at Cape Fear Academy says he loves being able to take the family boat over to Masonboro Island to surf and spend time with his dad.

“He is the one that taught me how to surf. It keeps us together and we can talk in the water and give each other tips ” Brandon says.

As Senior Vice President of Bald Head Island Limited the sports ability to open and clear the mind has kept Mark addicted to surfing.

“You can never go out in the water and not learn something about yourself the water your equipment or the relationship with your son ” Mark says. “Every day is different in the water and when you stand up on a wave you are 100 percent in the moment. That exhilaration is whats relaxing.”

Even though he has always encouraged Brandon to surf Mark knows that pushing kids can sometimes backfire with their loss of interest as a result. Instead he hopes to continue to teach his children the values of surfing.

“Surfing is really a kind of quest for finding perfection in the location environment and surf and you know youll never find it but its that search thats the lifetime goal ” Mitchell says. “Thats the idea that will keep us close.”

Surfs up for the Morvils

With their laidback and easygoing attitudes the Morvil family embodies the surfing lifestyle.

Jeff Morvil moved to North Carolina 25 years ago and has since started his own company the Morvil Advertising and Design Group. It was at Wrightsville Beach that he met his wife April while surfing the local waves.

April who has lived on Wrightsville Beach her entire life remembers a time when the island was not quite as developed as it is today.

“I used to ride my horses down on Shell Island and there was nothing but dunes ” April says.

And as well as seeing Wrightsville Beach grow with the addition of houses and hotels she has also seen a big increase in the amount of women who surf.

Together Jeff and April have reared their entire family around the surf.

As a family the Morvils have traveled as far as Puerto Rico to enjoy their favorite hobby but when they are at home they typically surf in Carolina Beach Wrightsville Beach and off Masonboro Island.

Sons Vance 16 Jonah 14 Gabe 11 and David 8 have all taken up the hobby and routinely surf with each other. The girls Sofie 5 and Isabella 1 still have a few more years before they take up the family sport.

For Jeff there was really never any other option for involving his sons in surfing. All of his boys got into the sport the same way he did by learning to skate first.

“I didnt try and get them to surf at all ” Jeff says. “They were all skaters and it just naturally occurred that they got into surfing.”

Vance a soccer player at Hoggard High School enjoys the time he gets to spend with his family while in the lineup.

“Id much rather surf with them than anyone else ” Vance says. “Its just a better vibe being out there with them rather than a bunch of guys you dont know.”

For the oldest boy going more than a few days without surfing makes him want to get out in the water even more. And that makes his love grow for what he feels will be a lifelong sport.

Jeff and April both agree that the beach “encompasses” their familys attitude and the beach lifestyle is the only one for them.