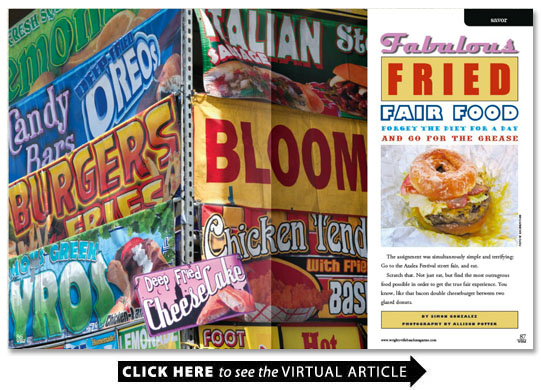 The assignment was simultaneously simple and terrifying: Go to the Azalea Festival street fair and eat.

Scratch that. Not just eat but find the most outrageous food possible in order to get the true fair experience. You know like that bacon double cheeseburger between two glazed donuts.

The intrepid writer wasn’t a stranger to hazardous duty. He flew into Baghdad shortly after the fall of Saddam and spent a couple of weeks in post-Taliban Afghanistan covering relief work while under the “protection” of a warlord. A newsgathering trip to earthquake-ravaged Indonesia was cut short because of Al-Qaeda activity in the area. He’s been threatened by professional athletes high school football coaches and soccer moms.

But searching out food dedicated to the proposition that everything is better when thrown in the deep fryer? This seemed particularly risky.

Still an assignment is an assignment. And so the writer headed downtown notebook in hand and antacids in pocket to see what he could find.

The sights smells and sounds of a street fair are unique. Where else can you see signs advertising deep-fried Oreos and hear “Who’s waiting for fried pickles?”

Fried pickles? No thanks. And alas (thankfully?) none of the vendors seemed to be offering the donut bacon cheeseburger. So how about the Italian sausage smothered with onions and peppers with a side of steak and cheese fries? And for dessert why not the deep-fried cheesecake?

The food was quite good. The Italian sausage was plump and juicy the onions and peppers cooked to perfection. The fries were a little on the greasy side but tasty. The deep-fried cheesecake was the highlight deliciously decadent.

Adding to the ambience was the view of the Cape Fear River and conversation with fellow fair-goers sharing a waterside bench. After the meal there was the opportunity to walk off a couple of calories by checking out the crafts and other offerings from vendors.

Steve Henderson food vendor chair of the Azalea Festival street fair accurately sums up the experience explaining why tens of thousands of people brave the crowds and the traffic stand in long lines and order food they might not try anywhere else.

“In a normal setting you would never see someone walking around with a turkey leg but they do it here ” he says. “It’s comfort-type food and guilty-pleasure type food. When you are there it’s the smells and the different food vendors. You are with your friends and family. Being at the street fair is kind of a community-type atmosphere.”

It isn’t fine dining but that’s OK. That’s not the point of fair food. It’s a day to throw the diet out the window and eat something fun and different. Have a cheat day — even if the calorie count is more like a cheat week. The more fat the better.

As the Riverfest website puts it it’s all about the gooey greasy goodness.

Riverfest offers the next chance for fair food in Wilmington. The annual festival by the Cape Fear is scheduled to take place October 8-9. It will feature plenty of vendors selling arts and crafts and live music but many will go just for the food.

“It’s one of those things where you just throw your diet out the window for a weekend ” says P.C. Snowden food vendor chair for Riverfest.

Thousands of people do just that. The food is one of the lures that keeps the crowds coming to the fairs year after year.

“It seems like everybody you see down there has bought something ” says Henderson who has worked with the Azalea Festival for 20 years. “The lines are pretty big and pretty steady. Most people who come to look and to shop go down there and eat. People come after the parade on Saturday. We see a lot of people after church come down and have lunch on Sunday.”

As the people in charge of approving the fare for Wilmington’s two major downtown festivals Henderson and Snowden are constantly on the lookout for the latest trends in fair food without sacrificing the perennial favorites.

“We look for diversity as far as the food and the menus go ” says Snowden who is in his fourth year as Riverfest food vendor chair. “We try to look for the quality and the presentation they make and of course the pricing. We listen to the response of the people out on the street. If we have a vendor that doesn’t cut it they don’t come back.”

“You’re always going to have a lot of funnel cakes ” Henderson says. “People always look for those.”

The trend in recent years is to deep-fry everything: Cheesecake. Oreos. Twinkies. Snickers. Reese’s. The doughnut burger. Even butter. Yes butter.

It should either make your mouth water or your stomach churn.

“About 15 years ago the most exotic thing was gator bites ” Henderson says. “They are deep frying anything they can find these days. They keep coming up with more and more.”

Eating high-calorie low-nutrition food is part of the fun of a street fair but the organizers aim to make sure it’s at least somewhat balanced.

“We had Thai food and Chinese more Hispanic food ” Henderson says. “We have Southwest-type food like burritos. What people are trying to find is more diversity not the same old same old.”

“People are looking for a variety of choices ” he said. “Some years we have to turn down vendors because they are too repetitious.”

With an emphasis on a wide assortment of choices the street fair can become a place to try something new.

“We have a lot of vendors that do a lot of the exotic foods Far East and Greek and they do quite well ” Snowden says. “They have a fantastic presentation. They set up a table and let people know what they are fixing.”

It helps if it’s finger food. The nature of a street fair tends to make it a moveable feast.

“We had a clam chowder that’s delicious but nobody wants to walk around eating clam chowder ” Henderson says.

Whether opting for grilled or fried traditional or exotic it should be safe to eat. The men in charge of the fair food point out that the health department comes on site to inspect the vendors and the cooking methods and to ensure the proper handling of waste and grease.

“They have to follow strict rules ” Henderson says. “It’s cooked up fresh every day. The quality of what you are getting is pretty good even if it’s decadent.”