Experiment and Abandon: Exploring the Potential of Paint 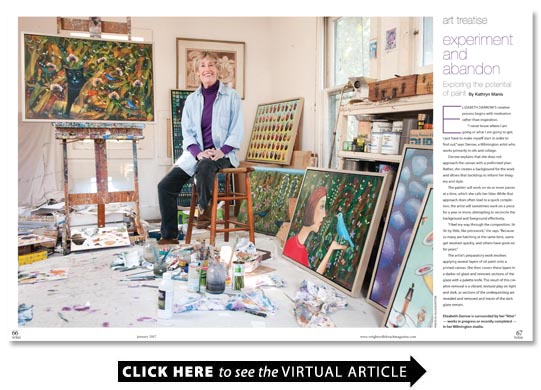 Elizabeth Darrow’s creative process begins with motivation rather than inspiration.

“I never know where I am going or what I am going to get; I just have to make myself start in order to find out ” says Darrow a Wilmington artist who works primarily in oils and collage.

Darrow explains that she does not approach the canvas with a preformed plan. Rather she creates a background for the work and allows that backdrop to inform her imagery and style.

The painter will work on six or more pieces at a time which she calls her litter. While that approach does often lead to a quick completion the artist will sometimes work on a piece for a year or more attempting to reconcile the background and foreground effectively.

“I feel my way through the composition little by little like piecework ” she says. “Because so many are hatching at the same time some get resolved quickly and others have gone on for years.”

The artist’s preparatory work involves applying several layers of oil paint onto a primed canvas. She then covers these layers in a darker oil glaze and removes sections of the glaze with a palette knife. The result of this creative removal is a vibrant textural play on light and dark as sections of the underpainting are revealed and removed and traces of the dark glaze remain.

These winding swirling patterns of color lend themselves especially well to the botanical and Biblical themes of some of Darrow’s most recent work.

“Biblical ” an example of the artist’s oil on collage is built on a background of pinks blues and pale yellow. The foreground features collaged flora and fauna including fish that appear to swim in the rippling water suggested by the canvas’s color scheme and texture and birds that fly overhead. Near the top of the composition stands a lone male figure encircled by small floral elements recalling the dotted halos of Crusader and Ottonian art.

Darrow grants titles to her pieces as the final touch mulling through a running list of possibilities that occur to her during the creative process. The title for “Biblical” was informed by “the plenty” that the artist saw in the floral and fauna of the final composition as well as the significance of the lone male figure in the Judeo-Christian tradition.

“I have a lot of fun with the titles; to name them feels like completing the painting ” she says. “And titles can help the viewer to interpret or understand what the artist saw in the work.”

Collage is an artistic technique involving the application of paper photographs or fabric to an often-painted surface which creates a layered effect. Artists have employed this technique since the advent of paper although the Cubist painters Picasso and Georges Braque are credited with establishing the term and the technique as a medium in its own right. “Collage ” from the French term “coller” meaning “to glue” or “to stick ” was definitive of Synthetic Cubism the later wave of this famous visual art movement.

An earlier form of Cubism Analytic Cubism included paintings that fragmented representational elements down to the basics of line shape and color. However this second iteration of the movement focused on combining a variety of fragments to create a new whole. It is not surprising then that the movement’s champions looked to collage to help create these new perspectives and images.

From this period on collage would be used by many artists including the Abstract Expressionists Pop Artists and several contemporary painters. The prolific American art critic Peter Schjeldahl said “After Picasso and Georges Braque collage became the most consequential visual-art form of the 20th century.”

Darrow’s collage works which can be seen in an exhibition at the Burgwin-Wright House until January 20 and are regularly on display at Art in Bloom feature many horticultural elements. Repeating images in her work include gingko leaves Japanese maple leaves and Chinese tallow leaves as well as a floral shape derived from a French Impressionist painting she cut from a magazine as seen in “Bliss.”

She isolates the forms and shapes that appeal to her and works with Dock Street Printing to create repeating sheets of them. Thus she can maintain consistent imagery in her work and has access to a large quantity of collaging materials.

One of the most exciting things about Darrow is the artist’s commitment to creative experimentation.

“When I’m working I get into this little groove and it sort of takes over ” she says. “But in order to refresh stylistically I often feel like I need to move on to another approach.”

Pushing herself in this way while also approaching the canvas intuitively can be intimidating and sometimes nerve-racking.

Because of this impulse to push the possibilities of the canvas Darrow’s work reflects a wide range of skill style and subject matter.

One unique technique also featured in the Burgwin-Wright house show is her use of stream-of-consciousness writing. Written onto a black background using oil crayons these thoughts serve as “an access point to begin.” Darrow builds the paint and collage around these marks.

In the style of famous writers like James Joyce she writes down literally any thought.

“Sometimes it’s as simple as �My arm really hurts I can’t wait until I get to the bottom of the canvas;’ anything that comes to mind ” she says.

This technique can be seen in many of her collage works. In some pieces the writing is eventually obscured by the rest of the composition. In others the writing remains obvious and almost legible.

In “Ad-Infinitum ” which means “again and again in the same way” or “forever ” the artist uses this stream-of-consciousness writing to build a linear stacked composition. She writes from top to bottom and left to right leaving room for collaged elements between the lines of text.

Animal and plant-like paper figures march in succession on top of one another between the thoughts composed in oil pastel. The sumptuous color palette of blues purples and greens suggests a celebration of nature and a Garden of Eden-like abundance.

Darrow received her degree from Oberlin College in Ohio where she cultivated a love for the American art of the 1950s. This period was defined by the emergence of Conceptual Art and by a worldwide celebration of the Abstract Expressionists. Among the artists Darrow sites as inspirational are Willem de Kooning Arshile Gorky and Jackson Pollock.

Pollock may be the best known of the Abstract Expressionists famous as much for his aggressively masculine persona and fatal alcoholism as his now-iconic style of drip painting. He provided a compelling face for this movement which was breaking all kinds of artistic rules during the post-Depression era.

In the 1940s he quickly became symbolic of this new distinctly American style that favored action movement and meaning. The interesting array of painters and sculptors considered part of this group were lauded as the “first American avant-garde.”

While grouping together such diverse works as the color block paintings of Mark Rothko and the surreal female figures of de Kooning might seem counterintuitive the artists of this movement shared both an interest in the technical capacity of their mediums and a commitment to Rothko’s “big emotions”: tragedy ecstasy doom.

Darrow describes learning about and viewing the works of these pioneers — particularly Pollock — as an exciting and defining experience.

“I was so excited by that ” she says. “I would start with that idea and then make it my own.”

This early interest in visual artists who pushed the boundaries of not just the painting medium but also their own creativity can be seen in Darrow’s contemporary practice.

Though the artist’s recent work is largely abstract she has also worked with figures and more representational imagery. Works like “Run” and “Reverie” are born of an almost folk-art aesthetic and are compositionally much simpler than others of her experimentations. These paintings include what she bemusedly describes as “elementary forms” — people dogs horses cars trees — and many possess a light-hearted almost humorous air.

Still others such as “Seeing the Light” and “Quandary ” border on the surreal featuring figures and objects that melt into one another and cool dark color palettes that prompt contemplation. Paintings like “Oasis” and “Wade in the Water” feature geometric shapes and primary colors that bring to mind the dynamic mobiles of Alexander Calder.

The diversity and uncertainty of what might happen when she approaches the canvas is a strength. Darrow explains that patrons of her work often comment on the excitement of waiting to see what she will do next.

“They’ve come to expect a different flavor from me ” she says.