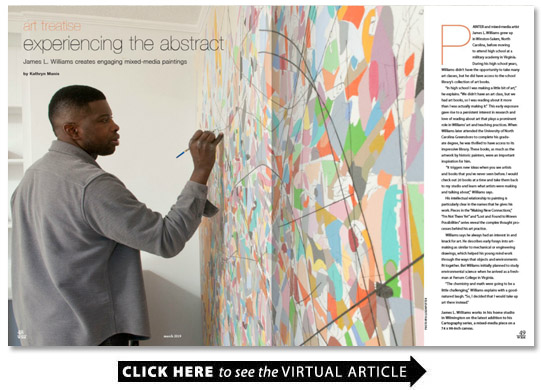 Painter and mixed-media artist James L. Williams grew up in Winston-Salem North Carolina before moving to attend high school at a military academy in Virginia. During his high school years Williams didn’t have the opportunity to take many art classes but he did have access to the school library’s collection of art books.

“In high school I was making a little bit of art ” he explains. “We didn’t have an art class but we had art books so I was reading about it more than I was actually making it.” This early exposure gave rise to a persistent interest in research and love of reading about art that plays a prominent role in Williams’ art and teaching practices. When Williams later attended the University of North Carolina Greensboro to complete his graduate degree he was thrilled to have access to its impressive library. These books as much as the artwork by historic painters were an important inspiration for him.

“It triggers new ideas when you see artists and books that you’ve never seen before. I would check out 20 books at a time and take them back to my studio and learn what artists were making and talking about ” Williams says.

His intellectual relationship to painting is particularly clear in the names that he gives his work. Pieces in the “Making New Connections ” “I’m Not There Yet” and “Lost and Found to Woven Possibilities” series reveal the complex thought processes behind his art practice.

Williams says he always had an interest in and knack for art. He describes early forays into art-making as similar to mechanical or engineering drawings which helped his young mind work through the ways that objects and environments fit together. But Williams initially planned to study environmental science when he arrived as a freshman at Ferrum College in Virginia.

“The chemistry and math were going to be a little challenging ” Williams explains with a good-natured laugh. “So I decided that I would take up art there instead.”

Though Williams changed the format and discipline from which he conducted his studies his artwork still reflects his interest in the environment and the complexities surrounding both natural and man-made structures. His paintings which are largely nonrepresentational are often reflections on photographs he takes of buildings and interesting scenes he finds while exploring new places. Williams is an avid hiker and appreciates the outdoors and is often traveling. Along with taking photos in the places that he visits he incorporates found objects from various locales into his mixed-media works.

Williams’ relationship to the environment is particularly apparent in his “Cartography” series some of which are currently hanging in New Elements Gallery in downtown Wilmington. One of these titled “A New Beginning IV ” vividly recalls a bus or train system map. The piece a 19.75-inch by 14.5-inch mixed media work on paper is incredibly colorful and sections of the composition appear to denote varying topography or a complex city design. Brightly colored lines run from clustered gridlike interior spaces out to the edge of the image. Many of these lines culminate in small diamond shapes as if highlighting important spots or stops along a transportation route. The piece is composed primarily in acrylic paints along with sections of a map which Williams cut into a grid-like design small pieces of paper and other media like pen pencil and possibly crayon or colored pastel. In this way the media Williams uses coincide with the subject matter — the assortment of tools and materials used is reminiscent of the variety of places and people inherent to any cityscape. In this piece and others like it Williams creates an image that is diverse vibrant and full of a variety of experiences especially if you take the extra time to look closely.

Williams describes the way that environment and art making collide for him.

“I feel like the things that I see are always abstract ” he says. “I end up just using the camera as a way to start the process. Once I have an image I blow it up on a wall and use a variety of pieces from that image. But then I often use this process to add several different images to one painting layering lines in different directions and selecting different angles from each. After that I’ll often take out some lines and paint over some areas and continue to journey through the thought and image. Painting is almost like a journey itself for me and the final painting functions as a map of that journey.”

This complex journey of addition and elimination is highlighted in paintings and because of Williams’ practice of combining the elements of many different scenes or images folks who encounter his pieces often feel they recognize places that are meaningful to them. And while few of his paintings are meant to depict a single location Williams appreciates this response. “There is a lot that people can find in my work ” he says. “I think as an artist you have to be accepting of what people see in your pieces. Oftentimes viewers think that they may recognize a specific location in an abstract way. And I do want them to feel like there is a certain place within the artwork. I also hope that they will trace around the artwork and not just focus on one piece of it; I hope that they would go full circle when looking at art.”

Williams’ pieces actively encourage this type of well-rounded engagement. In works like those in the “Setting a New Course” series vivid and high-contrast color palettes and stimulating geometric intersections of lines and angles actively push the viewer’s focus around the large 48-inch by 48-inch square canvases. No. 1 in this series features a palette of earth tones with multiple shades of blue pink and coral tan and yellow with green accents. As with others in his oeuvre sections of the piece are reminiscent of mapping elements and seem to depict bodies of water and components of a city layout. No. 3 in the series comprises an even denser array of thick black lines intersecting with small brightly painted shapes and larger topographic elements. In both cases the viewer does not have passive interaction with the piece; it is truly an experience to look at and engage with them.

Seeing the breadth and style of Williams’ work it is not surprising that he has a love for the Abstract Expressionists. This group of painters is famous for its focus on the practice of painting not necessarily what a painting represents. Williams particularly cites Arshile Gorky often called the father of Abstract Expressionism as influencing his work. The pieces in Williams’ “Finding New Places to Discover” series recall Gorky’s bold use of blacks and grays and subtle shading work. Gorky has been quoted as saying “Abstraction allows man to see with his mind what he cannot physically see with his eyes. … Abstract art enables the artist to perceive beyond the tangible to extract the infinite out of the finite. It is the emancipation of the mind. It is an explosion into unknown areas.”

Williams’ skill and creativity in abstraction and multimedia techniques achieve this palpable liminal space somewhere between the known and unknown the tangible and the intangible the real and the imagined.

Williams is a college teacher and a father to two girls along with being an accomplished and prolific artist. He currently teaches several courses online and has also taught courses in 2D design at Cape Fear Community College. Williams maintains his love of the environment in his artwork but also through gardening and lawn design.

“My yard is my other palette ” he says. “I love working with my hands. Gardening is a lot like painting for me and when I’m putting down dirt and planting things it’s almost like I’m making art.”

Williams’ paintings are full of both physical and intellectual energy which makes them exciting to look at. All his pieces are at once both personal and specific and are simultaneously broad in scope and intimately relatable. Often on huge canvases and done in large series Williams’ paintings will pull you in and take you on an immersive and unique adventure.

Williams’ work will be featured in an Abstraction show at Virginia Wesleyan University through March 7 and can be found in multiple galleries in the Wilmington area.