Every Detail Tells a Story

A talented team brings a coastal home together 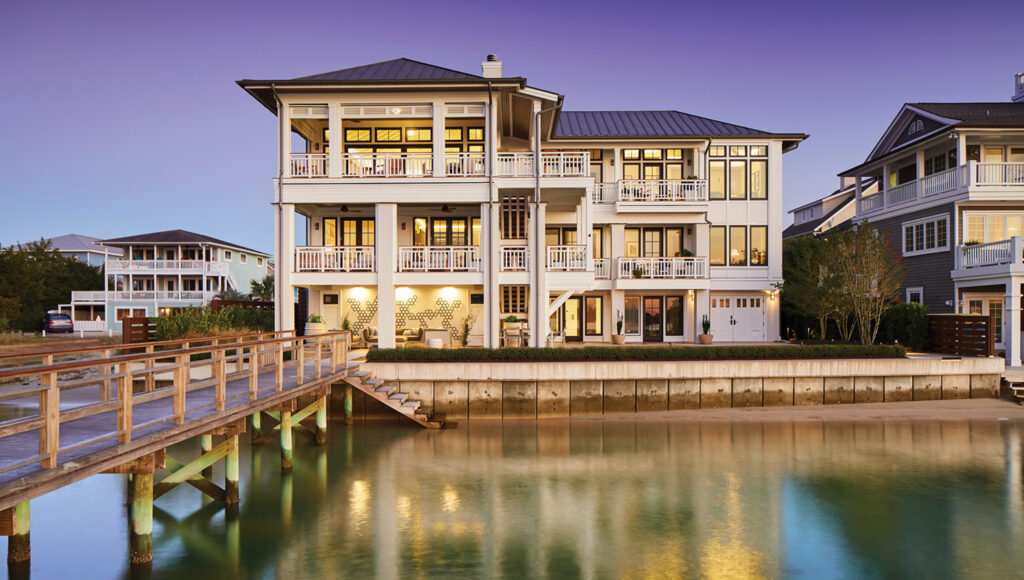 The sound-facing side of the residence appears to rise out of the water, reflecting the owners’ vision for making the home feel like an extension of their dock. Photo by Michael Blevins/MB Productions NC

Similar to a jigsaw puzzle, where nothing is left to chance and the individual parts combine to form something beautiful, this bespoke coastal home in Wrightsville Beach reflects the combined talents of a prominent architectural firm, an accomplished interior designer, and numerous local artisans/craftsmen.

Their job was to build within the footprint of the former island home and to bring the discerning tastes, sensibilities and preferences of the owners into reality.

“We really focused on maximizing this space for the owners as much as possible,” says project architect Mark Wilson of Kersting Architecture. “Building within the footprint of the former home allowed us to place the home closer to the water than we would have been able to, thus taking advantage of ‘grandfathered’ waterfront setbacks.”

To protect the home from the elements as much as possible, the professionals from Parker Construction Group and WD Jones Engineering drove precast concrete piles deep into the sand. These were tied together at the floor level by thick concrete slabs. Interior walls were built with wood framing. A discreet steel frame was placed on the top level to allow for the pyramid-style vaulted ceiling.

Many of the exterior materials were selected to accommodate the busy lifestyle of the owners. Low-maintenance, highly durable materials including fiberglass-clad windows, ipe decking, a zinc roof and cedar shingles were used in an effort to stand up to the harsh coastal environment.

“We really love the cleverness in the design,” the owner says. “Everything is perfectly hidden, and it would be impossible to know the shutters were here unless they were in operation.”

The attention to detail evidenced by the shutters is just one example of the planning and thoughtfulness that went into every inch of the home. The unique design concepts include two “rooms-within-a-room,” built into the great room to function as jewelry boxes for the owners, to showcase their artwork and the wines collected over the course of their travels.

“The owners have an extensive art collection from their travels and bought a few additional pieces specifically for this home,” says Leslie Stachowicz, president and principal interior designer of Kersting Peridot Interiors. “In particular, the office art and the Moroccan painting in the stair landing, and the artwork in the living/dining area, which is the Hippocratic oath in Morse code.”

The nine vases displayed adjacent to the kitchen were made by Ben Owen III, a native of Seagrove, North Carolina. He followed in the footsteps of his grandfather, a master potter who ran Ben Owen Pottery from 1959-1972. His work can be found in national museums such as the Museum of Fine Arts and the Smithsonian Museum of Art. Commissioned works can be seen at the Ritz Carlton Hotel in Tokyo, and the Umstead Hotel and Spa in Cary.

“We wanted to support a local artist,” the owner says. “These added a fun talking point with our guests, and a point of interest to a large room.”

Equally impactful as a focal point is the chandelier in the wine vault, custom-made from the bottles consumed during the groundbreaking celebration. Stachowicz was responsible for implementing the idea.

To accomplish the vision, Stachowicz worked with Kathleen Plate from Smartglass Recycled Jewelry, an Atlanta-based firm that developed a patented process combining techniques from glass, ceramics and stone work to produce a new material from recycled glass bottles. This resulted in the glass for the chandelier having a similar feel and appearance to sea glass.

When the home is illuminated at night, the fixtures create an elegant contrast with the custom live edge dining table, handcrafted from Oregon black walnut.

“We incorporated warm grays and taupes with white accents, dark wood and black floors,” Stachowicz says. “The concept that guided the design was the idea of combining a neo-Caribbean style with coastal North Carolina.”

“The design was truly a collaborative effort, like most of this project, between the homeowners and the team from Kersting Architecture,” Stachowicz says. The guest lounge and barmoire are a central component of the second floor, which also houses all of the guest suites.

The custom “barmoire” — a word coined by the owners — that adorns the guest lounge is another thoughtful design feature. It includes a coffee station and wine dispenser, plus a sink, mini-fridge and dishwasher.

“The upper level hosts the cathedral-like great room, with the kitchen, dining and living spaces all flowing onto a gracious western-facing porch for sunset views,” Wilson says. “The master suite is located just off the living area on the top level, allowing the house to ‘live small’ in the case of just the couple staying in the home.”

A hidden office in the master suite is another example of the attention to detail.

“Sometimes, it’s the little things that make you realize you have a special house,” the owner says.

The owners love the outdoor kitchen on the waterfront side, as it allows for a sea-to-table dining experience. They also love the waterside garage for its carriage-style doors and the roll-out rack for kayaks, as well as custom-built cabinetry on wheels to allow for an easy ingress/egress to their boat.

“Being avid boaters, the owners wanted the home to feel like an extension of their dock,” says Michael Kersting, founder of Kersting Architecture. “Rooms that flow into outdoor spaces and views of the water were an emphasis in the design.”

With so many outdoor living spaces, selecting the perfect outdoor furniture was paramount.

“We went through dozens of showrooms to pick out what was comfortable,” Stachowicz says.

She even traveled to New York with the owners on shopping runs.

“This was a very rewarding project, because the owners are amazing people and I was able to work very closely with them and the architects throughout the entire project,” Stachowicz says.

The owners are known for giving back. When a vacant lot on the street side became available, they purchased it and transformed it into a green space for the neighborhood.

“This is a calming and peaceful place for us to appreciate the natural environment,” says the owner, who places a 20-foot Christmas tree on the property each year. “We knew exactly what we wanted to build, and the team successfully articulated our vision.”