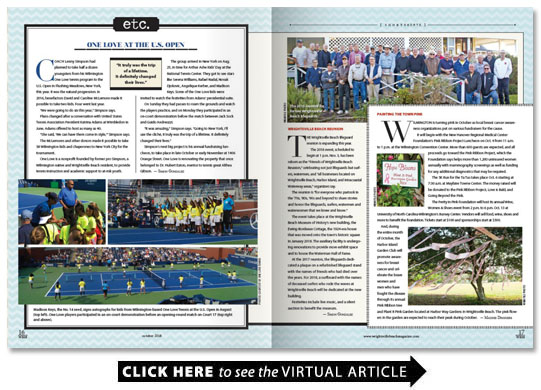 Coach Lenny Simpson had planned to take half a dozen youngsters from his Wilmington One Love tennis program to the U.S. Open in Flushing Meadows New York this year. It was the natural progression. In 2016 benefactors David and Caroline McLemore made it possible to take two kids. Four went last year.

“We were going to do six this year ” Simpson says.

Plans changed after a conversation with United States Tennis Association President Katrina Adams at Wimbledon in June. Adams offered to host as many as 40.

“She said ‘We can have them come in style ‘” Simpson says.

The McLemores and other donors made it possible to take 38 Wilmington kids and chaperones to New York City for the tournament.

One Love is a nonprofit founded by former pro Simpson a Wilmington native and Wrightsville Beach resident to provide tennis instruction and academic support to at-risk youth.

The group arrived in New York on Aug. 25 in time for Arthur Ashe Kids’ Day at the National Tennis Center. They got to see stars like Serena Williams Rafael Nadal Novak Djokovic Angelique Kerber and Madison Keys. Some of the One Love kids were invited to watch the festivities from Adams’ presidential suite.

On Sunday they had passes to roam the grounds and watch the players practice and on Monday they participated in an on-court demonstration before the match between Jack Sock and Guido Andreozzi.

“It was amazing ” Simpson says. “Going to New York I’ll use the cliche it truly was the trip of a lifetime. It definitely changed their lives.”

Simpson’s next big project is his annual fundraising luncheon to take place in late October or early November at 1406 Orange Street. One Love is renovating the property that once belonged to Dr. Hubert Eaton mentor to tennis great Althea Gibson.