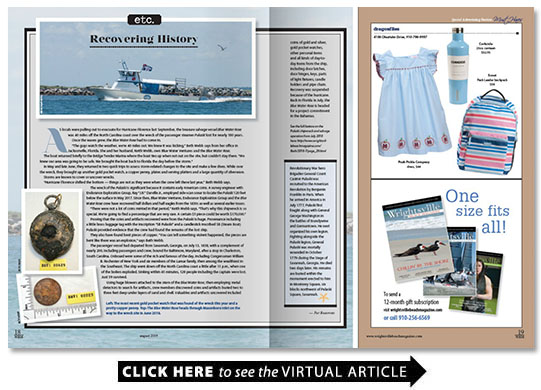 As locals were pulling out to evacuate for Hurricane Florence last September the treasure salvage vessel Blue Water Rose was 40 miles off the North Carolina coast over the wreck of the passenger steamer Pulaski lost for nearly 180 years.

Once the waves grew the Blue Water Rose had to come in.

“The guys watch the weather we’re 40 miles out. We knew it was kicking ” Beth Webb says from her office in Jacksonville Florida. She and her husband Keith Webb own Blue Water Ventures and the Blue Water Rose.

The boat returned briefly to the Bridge Tender Marina where the boat ties up when not out on the site but couldn’t stay there. “We knew our area was going to be safe. We brought the boat back to Florida the day before the storm.”

In May and late June they returned in two quick trips to assess storm-related changes to the site and make a few dives. While over the wreck they brought up another gold pocket watch a copper penny plates and serving platters and a large quantity of silverware.

Storms are known to cover or uncover wrecks.

“Hurricane Florence shifted the bottom — things are not as they were when the crew left there last year ” Beth Webb says.

The wreck of the Pulaski is significant because it contains early American coins. A survey engineer with Endurance Exploration Group Ray “J.R.” Darville Jr. employed side-scan sonar to locate the Pulaski 120 feet below the surface in May 2017. Since then Blue Water Ventures Endurance Exploration Group and the Blue Water Rose crew have recovered half dollars and half eagles from the 1830s as well as several earlier issues.

“There were not a lot of coins minted in that period ” Keith Webb says. “That’s why this shipwreck is so special. We’re going to find a percentage that are very rare. A certain $5 piece could be worth $170 000.”

Proving that the coins and artifacts recovered were from the Pulaski is huge. Provenance including a little brass luggage tag with the inscription “SB Pulaski” and a candlestick inscribed SB (Steam Boat) Pulaski provided evidence that the crew had found the remains of the lost ship.

They also have found bent pieces of copper. “You can tell something violent happened the pieces are bent like there was an explosion ” says Beth Webb.

The passenger vessel had departed from Savannah Georgia on July 13 1838 with a complement of nearly 200 including passengers and crew bound for Baltimore Maryland after a stop in Charleston South Carolina. Onboard were some of the rich and famous of the day including Congressman William B. Rochester of New York and six members of the Lamar family then among the wealthiest in the Southeast. The ship went down off the North Carolina coast a little after 11 p.m. when one of the boilers exploded. Sinking within 45 minutes 128 people including the captain were lost. Just 59 survived.

Using huge blowers attached to the stern of the Blue Water Rose then employing metal detectors to search for artifacts crew members discovered coins and artifacts buried two to three feet deep under layers of sand and shell. Valuables and artifacts uncovered included coins of gold and silver gold pocket watches other personal items and all kinds of day-to-day items from the ship including door latches door hinges keys parts of light fixtures candle holders and pipe chain. Recovery was suspended because of the hurricane. Back in Florida in July the Blue Water Rose is headed for a project commitment in the Bahamas.

See the full feature on the Pulaski shipwreck and salvage operation from July 2018 here: http://www.wrightsvillebeachmagazine.com/flash/2018-7/page_29.html

Revolutionary War hero Brigadier General Count Casimir Pulaski was recruited to the American Revolution by Benjamin Franklin in Paris. When he arrived in America in July 1777 Pulaski first fought along with General George Washington in the battles of Brandywine and Germantown. He next organized his own legion. Fighting alongside the Pulaski legion General Pulaski was mortally wounded in October 1779 during the Siege of Savannah Georgia. He died two days later. His remains are buried within the monument erected to him in Monterey Square six blocks northwest of Pulaski Square Savannah.