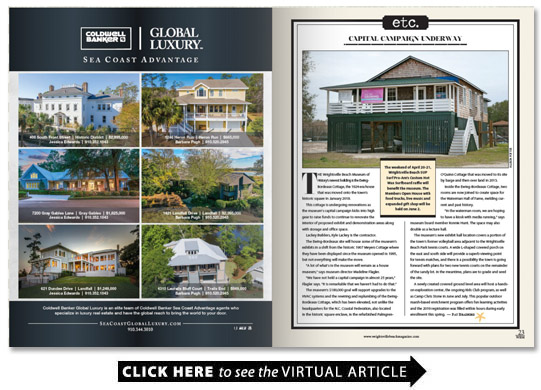 The Wrightsville Beach Museum of History’s newest building is the Ewing-Bordeaux Cottage the 1924-era house that was moved onto the town’s historic square in January 2018.

This cottage is undergoing renovations as the museum’s capital campaign kicks into high gear to raise funds to continue to renovate the interior of proposed exhibit and demonstration areas along with storage and office space.

The Ewing-Bordeaux site will house some of the museum’s exhibits in a shift from the historic 1907 Meyers Cottage where they have been displayed since the museum opened in 1995 but not everything will make the move.

“A lot of what’s in the museum will remain as a house museum ” says museum director Madeline Flagler.

“We have not held a capital campaign in almost 25 years ” Flagler says. “It is remarkable that we haven’t had to do that.”

The museum’s $180 000 goal will support upgrades to the HVAC systems and the rewiring and replumbing of the Ewing-Bordeaux Cottage which has been elevated not unlike the headquarters for the N.C. Coastal Federation also located in the historic square enclave in the refurbished Palmgren-O’Quinn Cottage that was moved to its site by barge and then over land in 2013.

Inside the Ewing-Bordeaux Cottage two rooms are now joined to create space for the Waterman Hall of Fame melding current and past history.

“In the waterman room we are hoping to have a kiosk with media running ” says museum board member Ronnie Hunt. The space may also double as a lecture hall.

The museum’s new exhibit hall location covers a portion of the town’s former volleyball area adjacent to the Wrightsville Beach Park tennis courts. A wide L-shaped covered porch on the east and south side will provide a superb viewing point for tennis matches and there is a possibility the town is going forward with plans for two new tennis courts on the remainder of the sandy lot. In the meantime plans are to grade and seed the site.