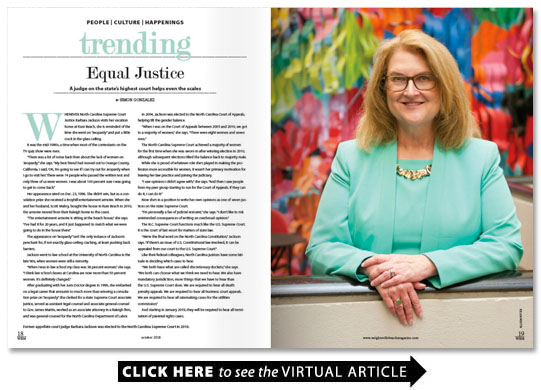 Whenever North Carolina Supreme Court Justice Barbara Jackson visits her vacation home at Kure Beach she is reminded of the time she went on “Jeopardy” and put a little crack in the glass ceiling.

It was the mid-1990s a time when most of the contestants on the TV quiz show were men.

“There was a lot of noise back then about the lack of women on ‘Jeopardy ‘” she says. “My best friend had moved out to Orange County California. I said ‘OK I’m going to see if I can try out for Jeopardy when I go to visit her.’ There were 14 people who passed the written test and only three of us were women. I was about 100 percent sure I was going to get to come back.”

Her appearance aired on Dec. 23 1996. She didn’t win but as a consolation prize she received a Broyhill entertainment armoire. When she and her husband Scott Mabry bought the house in Kure Beach in 2010 the armoire moved from their Raleigh home to the coast.

“The entertainment armoire is sitting at the beach house ” she says. “I’ve had it for 20 years and it just happened to match what we were going to do in the house there.”

The appearance on “Jeopardy” isn’t the only instance of Jackson’s penchant for if not exactly glass-ceiling cracking at least pushing back barriers.

Jackson went to law school at the University of North Carolina in the late ’80s when women were still a minority.

“When I was in law school my class was 38 percent women ” she says. “I think law school classes at Carolina are now more than 50 percent women. It’s definitely changed.”

After graduating with her Juris Doctor degree in 1990 she embarked on a legal career that amounts to much more than winning a consolation prize on “Jeopardy.” She clerked for a state Supreme Court associate justice served as assistant legal counsel and associate general counsel to Gov. James Martin worked as an associate attorney in a Raleigh firm and was general counsel for the North Carolina Department of Labor.

In 2004 Jackson was elected to the North Carolina Court of Appeals helping tilt the gender balance.

The North Carolina Supreme Court achieved a majority of women for the first time when she was sworn in after winning election in 2010 although subsequent elections tilted the balance back to majority male.

While she is proud of whatever role she’s played in making the profession more accessible for women it wasn’t her primary motivation for leaving her law practice and joining the judiciary.

“I saw opinions I didn’t agree with ” she says. “And then I saw people from my peer group starting to run for the Court of Appeals. If they can do it I can do it.”

Now she’s in a position to write her own opinions as one of seven justices on the state Supreme Court.

“I’m personally a fan of judicial restraint ” she says. “I don’t like to risk unintended consequences of writing an overbroad opinion.”

“We’re the final word on the North Carolina Constitution ” Jackson says. “If there’s an issue of U.S. Constitutional law involved it can be appealed from our court to the U.S. Supreme Court.”

Like their federal colleagues North Carolina justices have some latitude in deciding which cases to hear.

And starting in January 2019 they will be required to hear all termination of parental rights cases.

“That’s an enormous change ” Jackson says. “We’ve been running in the range of about 75-90 cases per year. Adding 100 cases is a huge impact. We haven’t reached a final decision how we’re going to handle them.”

Unlike the U.S. Supreme Court where justices are appointed for life state justices serve at the pleasure of the voters. Elections are held in even-numbered years and judges serve six-year terms.

“There’s no perfect system ” Jackson says. “I’m partial to the voters because they’ve elected me twice. I’ll be honest about that. If we’d had an appointment system when I ran the first time and the second time I can’t imagine I would have been selected given that the governor was a Democrat in both of those instances.”

She ran in nonpartisan races when she was elected to the Court of Appeals and the Supreme Court. Because of a change in the state’s voting law Jackson a Republican is running for re-election this year in a partisan race for the first time.

Although she’ll have an “R” by her name on the ballot for the first time she doesn’t see much difference.

Despite the disparity in political philosophies between the two parties Jackson says the differences can be overblown when it comes to the court. On the whole the justices function in a collegial atmosphere.

“We get along really well ” she says. “One of the things we do whenever we have court is have lunch together and talk and catch up with each other. The thing that gets missed — and I think this happens a lot at the U.S. Supreme Court too — is most of our opinions are unanimous 75 to 80 percent of them. It’s probably a little more interesting to read about the disagreements.”