A hidden camp on Hutaff, the remote barrier island, was a place of refuge for a generation of fishermen 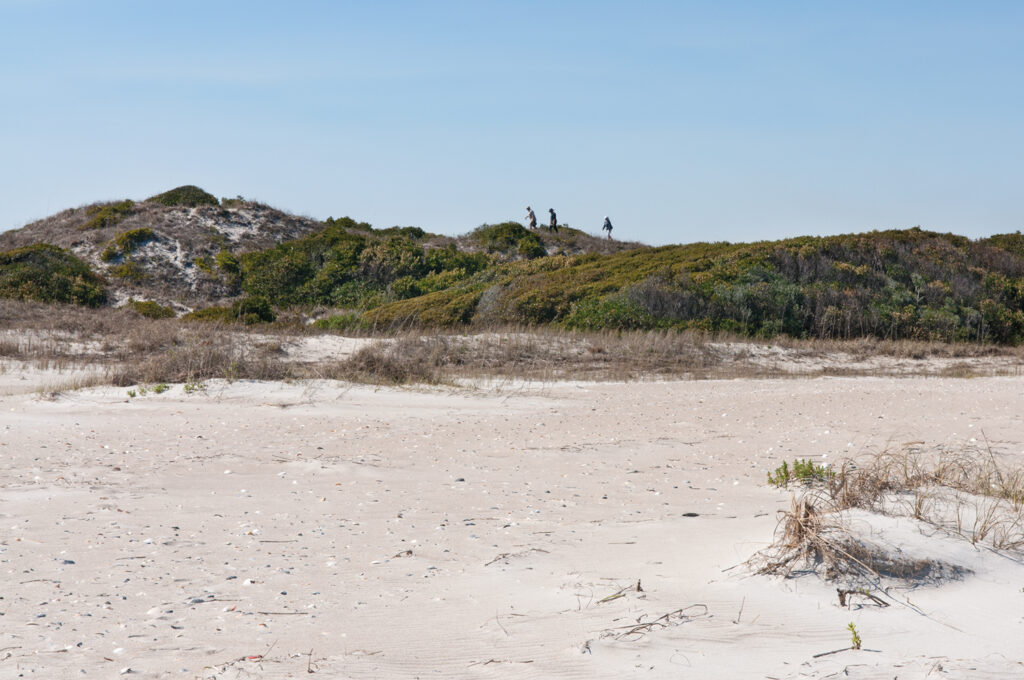 The majestic dune on Hutaff Island from the scout for “The Island That Won’t Be Tamed” by Simon Gonzalez, May 2017 Wrightsville Beach Magazine. Gonzalez is seen walking the ridge with Randy Williams and Pat Bradford. WBM File Photo

The Indian came in complete silence, startling the Skipper with a perfect imitation of an owl as he burst into camp.

“I had a dream last night” he said to the unsettled Skipper. “I was a great horned owl, and you were an osprey. I was sitting atop the big cedar tree watching you fly above the camp. You kept diving down then soaring back up, not hunting but searching for something. You floated in the sea breeze for a long time, then you flew out high above the shoals. I followed and watched you dive down into a great school of bull drum. You transformed into one of them and swam with the big reds to a sandbar way out in the inlet. There were thousands of fish on that bar, just congregating in the shallow water, soaking up the sun. And then I woke up.”

“What do you think it means?” asked the Skipper.

“I think it means something is about to change,” said the Indian.

The majestic dune is impressive and irresistible. The reward for a climb to the top is an astounding 360-degree panorama of land, sea, and a thousand acres of verdant marsh. The ridge rises from a windswept island landscape that has been pummeled and flattened over the years by numerous hurricanes. But the big dune has withstood them all.

For decades it was memorialized by a marker embedded at its highest point that read: “US Coast Geodetic & Survey Benchmark. For Information Write To The Director Washington D.C. $250 Fine Or Imprisonment For Disturbing This Mark.” The words were stamped on the top of a brass disk in a circular fashion.

It looked very official. It is gone now.

Perhaps some yet-to-be fined or imprisoned felon has pulled it up. Or perhaps it is still there, covered by sand. At the base of the dune is an island meadow with a path that leads into a natural enclave of yaupon, wax myrtle, dwarf palmetto, cedar, and other island flora. If you were shipwrecked on Hutaff Island, this is where you would want to be.

Long before I-40 connected Wilmington to the rest of the world, local drum fishermen knew about this place. For them it was sacred ground.

Fresh water is a rare commodity on an uninhabited barrier island. The Plumber knew how to get it.

Generations of men had camped at the base of the big dune. A vicious hurricane in the ’90s had washed away the old camp, piling three feet of sand on top and destroying the infrastructure. It marked the end of an era for the old timers, who never camped there again.

The Plumber had known and camped with some of those men. Now he introduced the camp to the next generation who would build it back. He was a link to the old camp, and a bridge to those about to replace it.  But first they needed water.

Mother Nature had reclaimed the place. He brought in his crew and after the arduous work of hacking their way in and making a clearing in the tangled brush, they began their work.

The men took turns pounding the drive cap and coupling the pipes together until the well point penetrated the water lens less than a dozen feet below. They mounted a pitcher pump on the threaded top pipe and rotated duty working the handle until they had pumped enough water to blow out a hollow around the point. Now primed, a few pumps of the handle would yield a five-gallon bucket of fresh water.

The water was the color of weak tea due to the tannic acid in the soil from the surrounding maritime vegetation, but it was potable. It was a fine camp amenity, and if they kept the leathers fresh, they had water.

The old well had been destroyed by a hurricane. The Plumber did not know it at the time, but over 20 years later, his handiwork would be destroyed not by another hurricane, but by men.

The camp itself was a simple affair. It consisted of an 8×20 foot deck built on grade, planked with 5/4 boards nailed on 4×4 sleepers. On either end were work stations. On the sides were benches wide enough to sleep on.

The men who came here thought of the platform as a little ship. She had standing rigging, and when canopied provided shelter for the entire deck below. The rigging consisted of 24 feet of galvanized cable spliced around thimbles and clamped on the ends. It was attached to 6×6 posts at the bow and stern. The cable ends were secured by turnbuckles to bolts threaded through the top of the post. The posts were then back stayed by cable in a similar fashion to tie downs augured into the sand. Running outside the benches were two rows of 4×4 posts with 2×4 rails nailed flat across the tops.

The men brought two superb nylon tarps with sewn-in brass grommets fashioned by a sailmaker in Maine, which they pulled over the main cable and then down over the side rails. They tied parachute cord through the grommets and cinched them tight around cleats nailed to the outside posts. Thus secured, the top cable could then be tightened by the turnbuckles and tuned like a violin. With the slack taken out and the wire tightened, the tarp served as a fine roof, rendering the structure as a seaworthy little cabin.

A generation of fishermen had sheltered in this contraption, riding out every type of weather imaginable. In all regards, it was a second home to them all.

They brought the heavy hub over by jon boat one bitterly cold winter day. Wearing full waders, the two men unloaded it and carried it through the frigid water and over the frozen marsh and oyster beds until they reached dry sand. They took turns rolling it several hundred yards to the base of the big dune, where they both had to push it up over the rise that led into camp.

When a fine sleet began to blow, stacking up on the brims of their caps, they looked at each other and smiled. “Our kind of weather,” commented one in a long-running joke between them. They had an uncanny history of finding themselves in the most miserable of boating conditions. They wrestled the hub to its final resting place.

The weather was deteriorating, and the tide was falling so the men had no time to admire their work or to dream. They hustled down the trail back to their boat.

Over the next 20 years the hub — salvaged from a termite-ridden family pack house in Columbus County — would serve as the official hearth of the place. During that time, many a drink would be shared, and stories told around the fires burning in that old hub.

Robert Rehder, an alumnus of the 50-year-old camp, wrote about the halcyon days he and his crew enjoyed back when Hutaff was known only by a few hardcore fishermen (“Drum Fishing Off Hutaff Island,” September 2021 Wrightsville Beach Magazine). He called to ask if any of our members would be camping the first week of October because he had been contacted by a local Scout leader who wanted to take his troop to Hutaff. Rehder, of course, knew the ideal spot.

It had been a few months since I had checked on the camp — we let it grow over every summer when the oppressive heat and fierce competition from the island’s flora and fauna makes camping prohibitive. But except for our annual fall cleanup, it should have been camp-ready for the Scouts.

I landed a mile down from the camp at a place we call Dead Man’s. I brought a pole rigged with a spoon and walked along the break, intently watching the surf zone for any signs of redfish. I plugged a few sloughs, but mostly enjoyed the walk. The water was Bahamian.

When I got in front of the big dune, I noticed an osprey hovering above the camp. He seemed to be marking something. When I made my way past the big dune and up the trail into camp, the osprey rose high in the sky and flew out toward the inlet. At the head of the trail, I noticed tracks from a four-wheeler. That was unusual. It was the first sign I was about to walk into a desecrated place.

When I reached the end of the trail where it disappears into camp, I knew something was wrong. I walked into the clearing and there was not a trace of the camp. It was completely and utterly gone.

I was overwhelmed with emotion and had to collect myself. I shot a quick video and walked back down the beach, not fishing now, just trying to come to grips with the loss of something dear. I sent the video in a group text to all the men I knew who would be affected by the camp’s destruction. My phone chirped until I finally cut it off at midnight.

There was a continuous stream of comments, shared photographs, and remembrances. It was as if a close friend had unexpectedly died.

We never owned the camp any more than an osprey owns the nest he builds. As any coastal ornithologist worth their salt will tell you, a well-built nest is likely to be appropriated by an opportunistic owl. We knew that people who had no hand in building the camp, might occasionally use it.  We just did not figure there would ever be an organized effort to destroy it.

Editor’s Note: The N.C. Coastal Land Trust acquired the beach, dunes, hammocks and saltmarsh that make up Hutaff Island in 2021. No concise explanation has yet emerged as why the hidden, 50-year-old camp was dismantled after the acquisition.

Randy Williams, the author of this firsthand account, is the “old salt” quoted in “The Island That Won’t Be Tamed,” our look at Lea-Hutaff Island in May 2017.