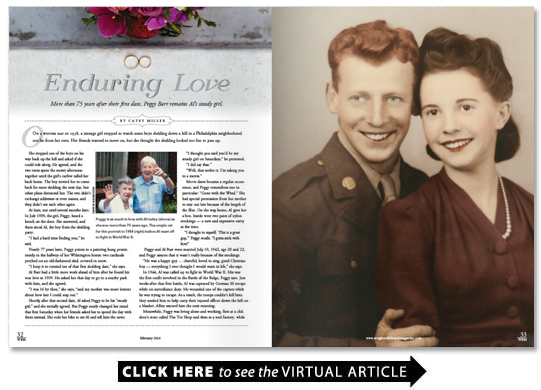 ?On a winter day in 1938 a teenage girl stopped to watch some boys sledding down a hill in a Philadelphia neighborhood not far from her own. Her friends wanted to move on but she thought the sledding looked too fun to pass up.

She stopped one of the boys on his way back up the hill and asked if she could ride along. He agreed and the two teens spent the snowy afternoon together until the girl’s curfew called her back home. The boy invited her to come back for more sledding the next day but other plans distracted her. The two didn’t exchange addresses or even names and they didn’t see each other again.

At least not until several months later. In July 1939 the girl Peggy heard a knock on the door. She answered and there stood Al the boy from the sledding party.

“I had a hard time finding you ” he said.

Nearly 77 years later Peggy points to a painting hung prominently in the hallway of her Wilmington home: two cardinals perched on an old-fashioned sled covered in snow.

“I keep it to remind me of that first sledding date ” she says.

Al Barr had a little more work ahead of him after he found his true love in 1939. He asked her that day to go to a nearby park with him and she agreed.

“I was 16 by then ” she says “and my mother was more lenient about how late I could stay out.”

Shortly after that second date Al asked Peggy to be his “steady girl ” and she initially agreed. But Peggy nearly changed her mind that first Saturday when her friends asked her to spend the day with them instead. She rode her bike to see Al and tell him the news.

“I thought you said you’d be my steady girl on Saturdays ” he protested.

“Well that settles it. I’m taking you to a movie.”

Movie dates became a regular occurrence and Peggy remembers one in particular: “Gone with the Wind.” She had special permission from her mother to stay out late because of the length of the film. On the way home Al gave her a box. Inside were two pairs of nylon stockings — a new and expensive rarity at the time.

“I thought to myself ‘This is a great guy ‘” Peggy recalls. “I gotta stick with him!”

?Peggy and Al Barr were married July 19 1942 age 20 and 22 and Peggy assures that it wasn’t really because of the stockings.

“He was a happy guy ? cheerful loved to sing good Christian boy — everything I ever thought I would want in life ” she says.

In 1944 Al was called up to fight in World War II. His was the first outfit involved in the Battle of the Bulge Peggy says. Just weeks after that first battle Al was captured by German SS troops while on surveillance duty. He wounded one of the captors while he was trying to escape. As a result the troops couldn’t kill him; they needed him to help carry their injured officer down the hill on a blanket. Allies rescued him the next morning.

Meanwhile Peggy was living alone and working first at a children’s store called The Tot Shop and then at a tool factory while missing her soldier and frequently writing letters. She felt hopeful when a newspaper reported that some troops were being sent home.

“One Sunday night I had just come back in the house [from mailing Al a letter] when somebody rang the bell and I opened the door and there he stood ” she says. “And we had a good cry.”

Al was soon stationed at Langley Field in Virginia and continued to serve for some time but never again without his steady girl by his side.

The Barrs have now been married for 73 years and have lived in Wilmington for about the last 40 of those. When they moved to North Carolina Al opened the plant that is now Siemens Energy.

D.K. Overton the Barrs’ neighbor calls Al and Peggy “the greatest love story you’ve ever heard.” He says the two are still as in love as ever and that Peggy talks constantly about how much she loves Al.

“They still think of each other as the love of their life ” he says.

Peggy waves his comments away with an embarrassed laugh.

“He talks about that all the time ” she says. “I don’t know why he says that.”

But anyone who spends even an hour with her can easily see why he says that and it’s a safe guess that he’s not the only one.

Peggy’s face lights up as she tells the story about Al looking for her after their sledding date and again as she talks about his service during World War II — “don’t forget to mention he won the Bronze Star for valor ” she says with ample measures of affection and pride.

She says that she doesn’t know anyone who doesn’t like Al and that she loves him as much today as she ever did.

“I just love him to death ” she says. “He’s been a great husband a great father” to their daughter Beverly who also lives in Wilmington.

Together the Barrs exemplify what marriage should be for Beverly who has been married for 40 years.

“It was a two-way street as far as how much one loved the other ” she says. “They were wonderful parents ? a great role model for what a happy marriage should be. There was never anybody else for them. I don’t ever remember them arguing they just got along.”

More than seven decades of marriage should make Peggy the perfect person to give advice on what it takes to stay so in love for so many years and to dispense wisdom to couples hoping for their own long and beautiful love story but Peggy just shrugs and smiles. There’s no secret formula. She loves him and she likes him. It’s easy and it’s natural. But she tries to put it into words.

“Take every day one at a time ” she says. “Don’t let little bumps in the road become big; step over them.”

She recommends starting each morning with a prayer to ask God to guide the day and intentionally spending meals together.

“If you love each other you get along ” she says.

Al was recently moved to a memory care facility where Peggy visits him every day. Going to see him “fills my soul up ” she says. He is still the happy guy she fell in love with and a “breath of fresh air” for the staff. He doesn’t remember Peggy’s name but always kisses her and calls her his honeybee.

“Just the other day he said to her ‘I love you I really love you ‘” Beverly says. “He’ll kiss her and say ‘Ooh that was a good one.'”

When Beverly and her husband come for dinner at Peggy’s house Al’s regular place is always set at the table. That seems to be a major theme of the Barrs’ love story: always saving room for each other.

“We never had anyone else ” Peggy says. “Life is still beautiful as long as I have him. ? God’s always blessed us.”