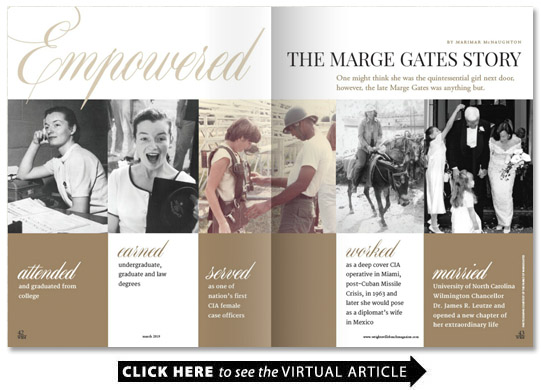 Born in 1936 and reared in Annapolis Maryland Margaret Jane Gates was the first female in her family to attend and graduate from college — earning undergraduate graduate and law degrees. She was one of the nation’s first CIA female case officers working in 1962 as a deep cover operative in Miami during the post-Cuban Missile Crisis. Later she would pose as a diplomat’s wife in Mexico. In June 1997 she married University of North Carolina Wilmington Chancellor Dr. James R. Leutze at Saint Andrew’s Church in Annapolis and opened a new chapter of her extraordinary life.

A Fearlessness of Consequences

When her daughter was a toddler Gates entered Georgetown University School of Law as a single mother and was among the first class of female graduates. With $10 000 in seed money from Ralph Nader she and a colleague co-founded the Center for Women Policy Studies in Washington D.C. Before Congress in the late 1960s she testified in support of legislation that would later be drafted into law as the Fair Credit Act enabling women and other minorities to apply for and receive lines of credit and credit cards in their own names.

Following her role as deputy director of the U.S.D.A. in 1983 she landed the penultimate job of her career when she was named executive director of Girls Clubs of America (later re-organized as Girls Incorporated and re-branded as Girls Inc.). The national nonprofit based in New York City supports minority girls as they transition into their teens.

During her earliest days as a coed at the University of Maryland Gates developed a crush on fellow classmate Jim Leutze. Though they went their separate ways married and started families with other spouses they would rekindle their romance decades later.

Reflecting on his wife’s career Leutze now chancellor emeritus of UNCW says “Marge went from the CIA to advocacy to then practical work dealing with problems of inequality. I’ve never thought of it that way myself but if you look at her career of marching against the war in Vietnam demonstrating for women’s rights and fighting legal cases and various other things she goes from that to the agriculture department and the food stamp program and waste fraud and abuse. She moves along in her career in a sense in a logical way from strident advocacy to legal advocacy to practical governmental intervention to help the less fortunate. This is the progression of her life.”

During their decades of friendship Leutze relied on Gates for counsel and advice including at key times during his own career: before he accepted positions as president of Hampden-Sydney College in Virginia and as chancellor of the University of North Carolina Wilmington in 1990.

“Marge always was able to do long-range thinking ” Leutze says. “She always was very analytical and very calm and reasoned in her reactions. … Not overly emotional not ideologically biased … but a solid reasoned thoughtful person. I think that was her success.”

Long before Gates announced her decision to relinquish her national post at Girls Inc. in November 1992 she submitted herself to personality testing to determine her next move. Ever the strategist Gates assessed her interests while simultaneously contemplating an orderly departure from the organization for which she had navigated a thorough re-branding. By then she was burned out says her dearest friend Ann Breen.

The results of the personality testing were summarized in one short paragraph:

“The stimulation of new ideas and concepts is favored over physical activities. Work activities which combine ideas and reflective thought with the opportunity to influence the thoughts and actions of others seem best suited to your pattern of interests. The use of words and a persuasive attitude add to your sense of fulfillment.”

Mid-1993 to 1994 during a year of transition Gates took a position as visiting professor at the University of Pennsylvania School of Social Work in Philadelphia and later updated her resume. Handwritten notes indicate she may have applied for employment with the White House.

She also wrote to former Georgetown Law classmate and friend Susan Hewmanregarding a Violence Against Women position at the Department of Justice asking her to “put my name forward for both the staff position and the advisory committee.”

It was not long before Gates landed a plumb assignment with the prestigious Aspen Institute as a visiting fellow in its nonprofit sector a position she held from 1994 to 1996. She remained with Aspen through 1999 but not before she rekindled her college romance with Leutze.

“I was a corporate lobbyist for a major healthcare company and I also worked in D.C. so I’d sometimes see Marge. I was always so impressed by her ” Broglia says. “So bright; such a leader.”

Barbara Feldon who starred as Agent 99 in the 1960s prime-time comedy “Get Smart ” and was herself a role model for young women became fast friends with Gates through Girls Inc.

“She wanted me to meet Jim at some Ivy League club off of Fifth Avenue ” Feldon says. “I remember meeting him and just being so impressed with him and her — that she had met this very extraordinary guy.”

A Pioneer Remarries and Retires

“There were times four or five years at a time when I didn’t know what Marge was doing but we pretty consistently checked in with each other ” Leutze says. “Marge came to my inauguration at Hampden-Sydney. Marge came to my inauguration here. … She came down here for Girls Incorporated. As executive director she came down to visit and stayed … in Kenan House. So in a sense there wasn’t a lot of catching up to do ” Leutze says.

She commuted for the first year of their marriage working in D.C. for several days during the week at the Aspen Institute and returning to Wilmington on weekends.

Whenever possible Leutze would help her get together with her friends.

During one visit to Washington D.C. they ran into Gates’ former Women in Law teaching partner Ruth Bader Ginsberg before she had been sworn in as The Honorable Associate Supreme Court Justice.

“We were having lunch at a Wisconsin Avenue caf� when Ginsberg entered ” Leutze says. “Recognizing Marge she was invited to join us and accepted.” The couple also traveled to London as part of a Civil Rights contingent and met with British Prime Minister Margaret Thatcher.

Shortly after her 65th birthday Gates drafted a chatty letter to her friends and colleagues.

Included in her well wishes post 9/11 and extoling matrimony after 30 years of solo womanhood she posed and answered the question of how she spent her time in Wilmington:

“So you must be wondering what I do all day. Well I do have a job of sorts. The beautiful historic home that Jim is required to live in has gotten very little fluffing since he came here 11 years ago. I recently had the furniture rugs paintings and art objects (some of which are in the attic) appraised. As a result I increased both the security systems on the house and the insurance on the contents by a factor of ten. I know that those of you who last saw me in my sparsely furnished 850-square-foot apartment in Battery Park City will have trouble imagining me trying to manage 8 500 square feet filled with a flamboyant collection of antiques. Please come and see for yourself.”

She spoke of her painting and converting a room in the apartment over the carriage house into an art studio and enrolling with daughter Elizabeth in a one-week watercolor workshop in Pawleys Island South Carolina.

Her letter concludes with:

“…P.S. I just found this on my computer apparently unfinished and never sent.”

In 2002 she began writing a memoir of her life beginning with her earliest girlhood memories. In these works that describe family gatherings on the Chesapeake Bay and its tributaries her voice is very clear. She wrote of her ancestors — notably maternal grandparents who held positions of authority in nearby Washington D.C. and of a beloved aunt with whom she drove to Mexico and spent the better part of a summer.

Her plans to write more were outlined in her own hand on yellow ruled legal pads. Lists of colleagues at the CIA Georgetown Law the U.S. Agriculture Department the U.S. Justice Department and others who were lifelong friends were listed repeatedly. The duplication was a sign that her mind was slipping and by 2014 Marge Gates’ memory loss was profound. All essay writing ceased.

Among her volumes of papers photographs and memorabilia an unfinished obituary was found.

“She once said this about herself ” Leutze says. “In the women’s movement one of her keys to success was that she was not strident and out there pounding on the table. That she could be counted on for calm reasoned persistent advocacy and could win people over who were not drawn to Bella Abzug’s kind of approach. Marge knew that. Marge knew that was her ace in the hole because that’s the way she worked.”

As American women seek role models today Marge Gates stands out as a woman possessed of her conviction who knew what she stood for. As opportunities manifested around her she saw value in her worth and envisioned how she might further the cause.

While the world at large tried to hold her to the old paradigms in the way she led her life she empowered women to shift their image from the inside out.