Elixir of the South 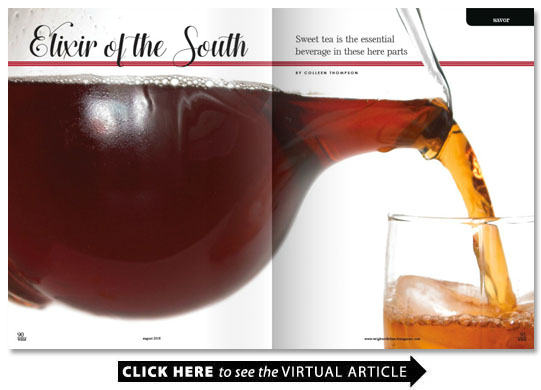 “Iced tea is too pure and natural a creation not to have been invented as soon as tea ice and hot weather crossed paths.” — John Egerton Nashville journalist and social historian

It’s sipped from Mason jars at church suppers and shows up in heirloom crystal pitchers at family gatherings. It cuts the richness of a pig pickin’ and is quaffed by the gallon at summer picnics.

There have been songs written about it: “Sweet tea pecan pie and homemade wine where the peaches grow.” Slogans like “If it ain’t sweet it ain’t tea” and “Southern girls are raised on sweet tea and a whole lot of Jesus” are emblazoned on T-shirts and bumper stickers.

“Sweetea” (pronounced as one word) is embedded in Southern culture crossing social ethnic and economic boundaries.

When Dolly Parton’s character Truvy in the movie “Steel Magnolias” talks about “the house wine of the South ” every Southerner knows she means sweet tea.

“The Potlikker Papers: A Food History of the Modern South ” by Southern Foodways Alliance director John T. Edge tells us that sweet tea is “a kind of culinary-cultural Global Positioning System an indicator of where we are and yes who we are.”

Journalist Allison Glock wrote about the South’s love for the beverage in “Garden & Gun”: “Sweet tea isn’t a drink really. It’s a culture in glass. Like Guinness in Ireland. Or ouzo in Greece.” Glock was such a devotee that a bout of homesickness led her to get “sweet tea” tattooed on her left arm.

Southern cookbook author and North Carolina native Sheri Castle describes it as “a rite of passage. Being offered a glass of sweet tea instead of milk is how Southern children know that they’re growing up.”

In his essay “Taste of Tradition ” Fred Thompson writes “My mother swears she didn’t put sweet tea in my baby bottles but the twinkle in her eye and the sly sideways smile tell me she’s probably not being truthful.”

Before 1900 the vast majority of tea in the United States was green tea from Japan and China. Limited amounts of tea also came from South Carolina the first state to grow it commercially. It is believed that French botanist and explorer Andre Michaux imported it along with camellias gardenias and azaleas for wealthy Charleston plantation owners. He planted tea near Charleston at Middleton Barony now known as Middleton Place Gardens.

Tea continues to be produced at the Charleston Tea Plantation on Wadmalaw Island from plants descended from some of the original South Carolina plants.

English and American cookbooks show us that tea has been served cold since at least the early 19th century when cold green tea punches that were heavily spiked with liquor were popularized. The oldest recipes in print are made with green tea not black tea. The tea punches went by names such as Regent’s Punch named after George IV. By the middle of the 19th century American versions begin to acquire regional and even patriotic names such as Charleston’s St. Cecilia Punch named for the musical society whose annual ball it graced and Savannah’s potent version Chatham Artillery Punch.

Recipes for nonalcoholic iced tea didn’t appear in print until 1876 when one was included in Estelle Woods Wilcox’s “Buckeye Cookbook.” A recipe published in Marion Campbell Tyree’s 1879 community cookbook “Housekeeping in Old Virginia: Containing Contributions from 250 Ladies in Virginia and Her Sister States ” called for green tea.

By the late 1800s the practice of serving iced tea had spread to other regions. The 1904 St. Louis World’s Fair increased the popularity of the beverage when Richard Blechynden director of the East Indian Pavilion added ice at the request of overheated fair attendees. Blechynden and his team took the brewed India tea filled several large bottles and placed them on stands upside down allowing the tea to flow through iced lead pipes. This free iced tea was very much welcomed by the thirsty fairgoers.

Iced tea spread quickly across the entire United States in the early 1900s and it became a common recipe in cookbooks. Black tea had replaced green tea as the main ingredient and Southerners were refining the practice of consuming it. Special tall glasses long spoons and lemon forks became customary.

In “Southern Cooking ” published in 1928 Henrietta Stanley Dull developed a recipe that became the standard for Southern iced tea. She advised women to serve it with a sprig of mint a strawberry a cherry a slice of orange or a ring of pineapple.

The Georgia General Assembly had sweet tea on the agenda in 2003 when State Representative John Noel introduced House Bill 819 proposing “iced tea is sweetened with sugar at the time that it is brewed.” It also declared that restaurants without sweet tea on the menu would “be guilty of a misdemeanor of a high and aggravated nature.”

It was later revealed to be an April Fool’s joke but Noel reportedly said he wouldn’t mind if it actually passed into law.

Everything in the South is Sweeter

We know that everything is sweeter in the South. Coca-Cola Pepsi and Dr. Pepper are all from the South as are pecan pie pralines and banana cream pie. Sweetness has been adopted into our lexicon — honey sweetie sugar-pie. Even our whisky is sweet.

If you were born below the Mason-Dixon line it is assumed that there is sugar in your tea — and lots of it. In fact some call it the Sweet Tea Line. North of that boundary tea mostly comes unsweetened and you have to order “sweet iced tea” if you want it that way. South of the line you just ask for “tea.” Anything else is simply superfluous.

Ask any Southerner where the best sweet tea is served and he or she will have an opinion. Sweet tea carries deep meaning for Southerners. Traditionally Luzianne is the preferred brand. The correct way to make it is to pour boiling water over pre-sweetened tea leaves.

How much sugar? Well like David Gibson wrote in “Chile Pepper Magazine ” “Carolina sweet tea coats the back of a spoon. Left undisturbed rock candy will form in the glass.” The amount of sugar is really up to the maker but the general rule of thumb is a glycemic index between cotton candy and Cheerwine.

Purists argue that any deviation from this process in terms of adding sugar or ice produces sweetened tea not sweet tea. There’s no hard and fast rule about adding lemon but it is usually served on the side.

If you see someone stirring sugar into iced tea they aren’t Southern. Pre-sweetening tea with a lot of sugar while it’s piping hot is the only way to dissolve every grain. A substantial amount of sugar must be added to the hot tea base — there’s no debating this. A syrupy base is what separates sweet tea from sweetened iced tea.

Since the 1950s the tea of choice has been Luzianne or orange pekoe. The tea base is a much stronger concentration than what would be brewed for hot tea. The strength balances out the sweetness and also accounts for the water from the melting ice.

In Southern homes sweet tea is always served from the same pitcher. These pitchers won’t be sullied with other drinks such as lemonade or punch. Oh and sweet tea pitchers are passed down from grandmothers.

The tannins in tea can make it taste very bitter so a trick for mellowing out the flavor is adding a pinch of baking soda to the base. Sweet tea garnish varies from region to region — lemon wedges or slices peels of lime or orange mint leaves and maraschino cherries are all acceptable.

Properly served iced tea is poured into a tall glass with a doily a saucer and a long-handled teaspoon.