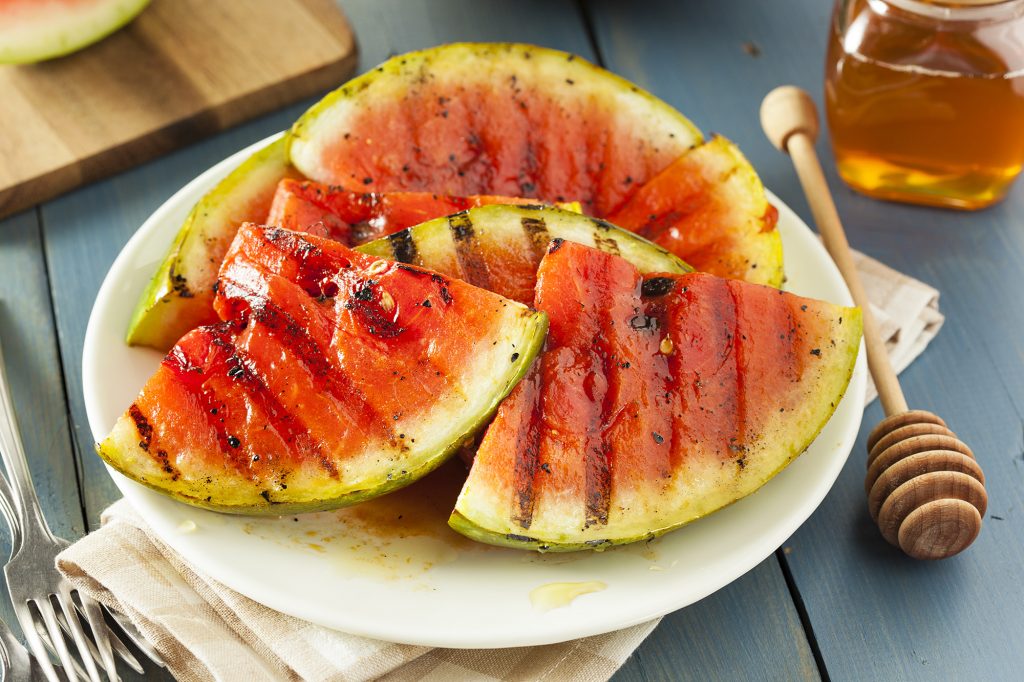 Watermelon festivals held every summer for more than three decades in Fair Bluff, Winterville and Murfreesboro were unfortunate casualties of the COVID-19 pandemic. In honor of the festivals, which are postponed until next year, it seems fitting to highlight the stalwart fruit of North Carolina summers.

There are plenty of ways to celebrate the watermelon using new and unconventional methods right at home in your own kitchen.

Simply slicing up a watermelon for the beach or a backyard barbecue is always a welcome treat, but the time-honored fruit tends to be underutilized in more epicurean cuisine. The watermelon’s flavor profile actually offers a capacity for elevated implementations that aren’t commonplace.

For your next backyard shindig, wow your guests with a refreshing take on the iconic summer staple.

½ watermelon, sliced into standard triangles, rind on, seeds removed as best as possible

Heat grill to 400 degrees. Slice watermelon into 1-inch thick triangles. In a medium-size mixing bowl, add chopped pine nuts, olive oil, chopped parsley, lemon peel, 1 tablespoon of lemon juice and sea salt. Refrigerate for at least 15 minutes. Grill watermelon for 2 minutes on each side, spritzing some of the lemon juice onto the watermelon near the end of cooking. When watermelon is nearly done, top each piece with 1 to 2 tablespoons of mixture from bowl and close lid for 1 minute. Remove from heat and place on serving tray. Garnish with 1 to 2 slices of prosciutto and shaved Parmesan.

½ of lemon, zested and juiced

In a blender or a small mixing bowl if you have an immersion blender, combine 1 teaspoon of lemon juice, 1 teaspoon of lemon zest, olive oil, red wine vinegar, honey, sea salt, mustard, oregano, paprika and pepper. Blend until emulsified. In salad bowl, add arugula and dress with mixture. Top with watermelon cubes and feta, and garnish with basil chiffonade.

Rinse tuna steaks, pat dry and cut into ½-inch cubes. Add to large bowl. Add all remaining ingredients, reserving half of the cilantro, and gently fold together. Cover and refrigerate for at least 4 hours. Serve chilled over rice and garnished with remaining cilantro.

3 cups watermelon juice, (about half of a 6-lb. watermelon)

Place watermelon chunks in a juicer or a blender and get it as liquefied as possible. Add habaneros, garlic, lime juice, white balsamic, sugar and salt to blender, or use a large bowl and immersion blender (if using a juicer for watermelon, switch to blender or immersion blender method). Purée until ingredients are well blended. Pour mixture into a medium pot and simmer on low-medium heat for 25 minutes, then let cool. Place raw chicken in a bowl, pour 3/4 of watermelon coulis over top, then cover and marinate for 4 to 6 hours. Heat grill to 450 degrees. Skewer chicken chunks and grill for about 4 minutes on each side. When done, lightly brush with small amount of watermelon coulis and cook for another minute. Plate skewers and pour remaining coulis on top and garnish with chopped mint and cilantro. Serve with pickled watermelon rind.

Peel off outermost, thin, green layer with a vegetable peeler. Slice rind into 1-inch strips. Bring remaining ingredients to a boil in large pot and add rind. Return to boil for 1 minute, then remove from heat and allow to cool. Remove the rind from pot, add to mason jar, then pour liquid on top until jar is full. Close lid and refrigerate overnight.