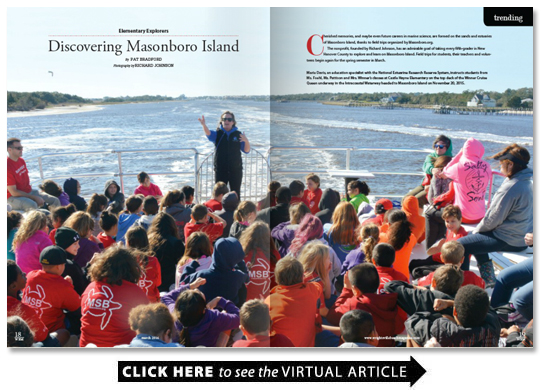 Cherished memories and maybe even future careers in marine science are formed on the sands and estuaries of Masonboro Island thanks to field trips organized by Masonboro.org.

The nonprofit founded by Richard Johnson has an admirable goal of taking every fifth-grader in New Hanover County to explore and learn on Masonboro Island. Field trips for students their teachers and volunteers begin again for the spring semester in March.

With 600 all-volunteer members Masonboro.org is best known for its red-shirted presence protecting the north end of the island every Fourth of July. Each year since 2009 volunteers haul away and recycle literally tons of discarded party litter after each Independence Day celebration.

The nonprofit’s Masonboro Island Explorer (ILX)’s program begun in 2013 and developed in partnership with North Carolina Coastal Reserve is a science-based field trip to the uninhabited barrier island lying between Wrightsville and Carolina beaches east of Wilmington. The protected island is only accessible by boat.

In this 2015-16 school year more than 800 students are expected to enjoy the educational outing. For 2016-17 the goal is 1 200 kids. Many students have not previously been on a large vessel. Some have not been to the county’s beaches must less a pristine barrier island.

Trips kick off at 9 a.m. when the kids teachers volunteers and escorts arrive at the docks in Carolina Beach. Begun with transportation to and from Marine Max at Wrightsville Beach the program moved south to accommodate a significantly larger number of students per trip.

Dockside shipboard and on-the-island instruction by Carolina Oceans Studies is curriculum-based. After ILX instructors brief the kids on the rules and they board one of the Winner head boats teaching begins immediately. Students sitting on the open top deck learn about marine life the ocean and the estuarine ecosystem they will find on the island.

After disembarking on the southern end of Masonboro Island students teachers and volunteers are split into three groups. Each begins an exercise at either the beach front on the island’s lee side or in an estuarine creek for hands-on crabbing.

On the beach students learn about creatures that dwell in and around the sand and hunt for samples of shells and other interesting finds to be identified. In the marsh they learn about what lives on the mud flats in a tide pool ecosystem. Live periwinkles and other small crustaceans and mollusks can be discovered and returned to their environment after close examination.

The crabbing begins with a how-to lesson followed up by the real thing. Paired up each child gets to toss out and reel in a string baited with a large chunk of fish on a hook that could have a live crab on the end. Discreetly placed nearby is a string of fish heads to lure crabs to the area where the children are crabbing.

The excitement of bringing in netting or losing a live crab is a blast for both kids and adults.

This hands-on wet-feet experience is ideal for curious fifth-graders.

When it is time to head back to the boat children and adults fall in line reluctantly but when everyone is offloaded back at the dock with wet feet and rumbling stomachs most are ready to head for their dry shoes and waiting transportation back to school.

Each child leaves with an appreciation for and a clear understanding of just why it is so important to protect and preserve the coast’s natural resources to ensure use for future generations to come.

This experience is made possible by Masonboro.org’s annual Bradley Creek fundraiser (which will be held this year on May 19 2016) grants and is supported by New Hanover County.