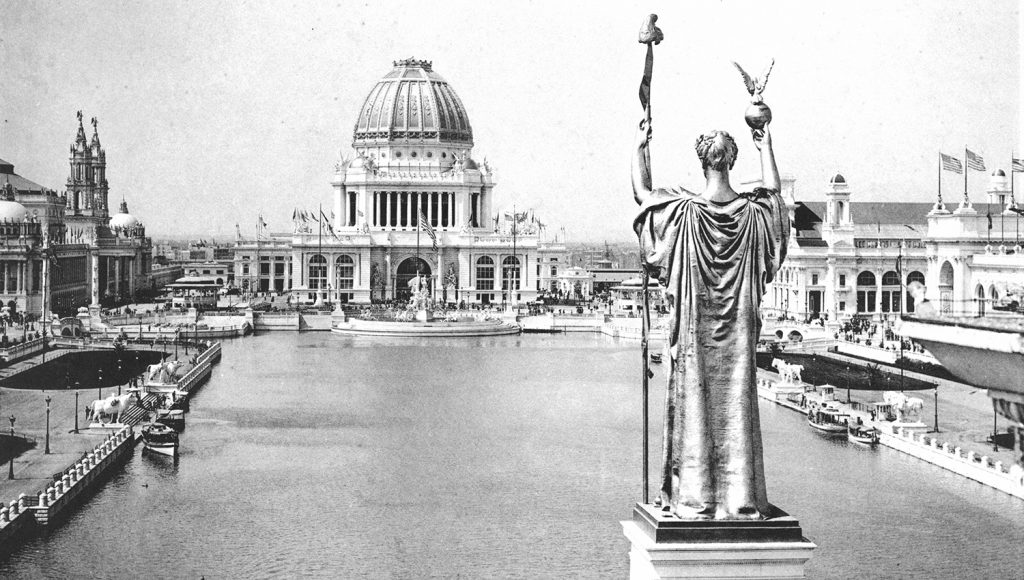 The Republic statue overlooks the Grand Basin and the Administration Building of the World’s Columbian Exposition, the 1893 World’s Fair held in Chicago. Elco boats can be seen docked and motoring about the pool.

Those with an eye for fine things are often drawn to the sight of wooden boats and launches with classic charm. Among these are the Elco.

The Electric Launch and Navigation Company, later known as Electric Launch Company (Elco), was founded in 1892. Its boats debuted at the 1893 Chicago World’s Fair, a fleet of 55 motor launches, 36 feet long and powered by battery-driven electric motors. During the exposition’s six-month run, a million passengers cruised the 690-acre fairgrounds’ lagoons, canals and its centerpiece pool, the Grand Basin.

Within eight years, electric-powered pleasure boats outnumbered the combined number of boats powered by steam and gasoline motors, first called explosive engines. But by 1910 the range and power of gasoline ruled and Elco followed suit.

The company built 5,000 marine craft ranging in size from the 18-foot gig or yacht tender to electric-propulsion cruising boats up to 127 feet in length. Elco’s credits include lifeboats for the United States Coast Guard, launches and tenders for various navies, anti-submarine motor launches in World War I, and 399 motor torpedo (PT) boats for the United States Navy in World War II. Most notable among the latter was PT-109, an 80-foot boat captained by Lt. John F. Kennedy, the future president.

Elco did not fare as well after the war. In time it became just a small branch of the much larger Electric Boat conglomeration, later known as General Dynamics. Elco shuttered in 1949. The company reemerged 38 years later, and today produces hand-crafted replicas of its classic boats.

Whether a replica or an original, a glimpse of an Elco is to see a classic American yacht.