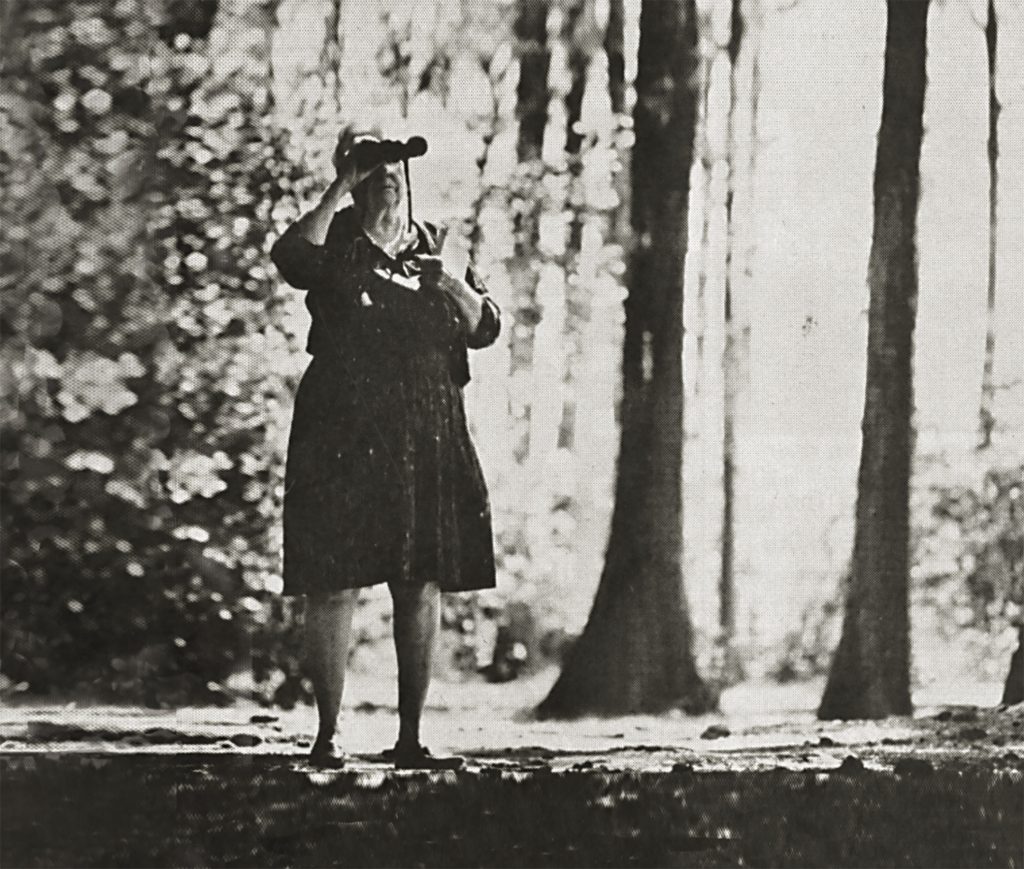 Edna Appleberry looks for birds near Greenfield Lake in 1977. | Scene Magazine, May 1977/Courtesy Cape Fear Museum of History and Science.

Some people are born with a special kind of magic, an innate spark that spreads like wildfire to everyone they meet. Edna Appleberry was one of those infectious people.

She is not a household name, but she ought to be. Her efforts as a naturalist and a birder helped bring Wilmington fame as a natural paradise and a landmark for scientific discovery and research.

Most people never called her Edna. Instead, they opted for her melodic married name, Mrs. Cecil Appleberry — or “Mrs. A” for short. The name sounds like something from a storybook, which rings true to her fantastic and vivacious legacy.

She was born in 1894, and her affinity and obsession with the natural world soon became obvious. When she was about 4, she spotted a large worm while walking through the country. She was so taken with its beauty that she decided to rush over to the barn to show her mother, who was learning how to milk a cow.

She burst in, triumphantly displaying her treasure, but didn’t get the reaction she had expected. Her mother, the barn worker and the cow all ran out in a panic. What the fearless 4-year-old believed to be a worm was in fact a scarlet kingsnake.

From then on, Appleberry’s love for nature only grew. She went on to become a prominent member of the Cape Fear Garden Club.

In 1933, an event occurred that changed the course of her life and brought her local fame as well: the Outer Banks hurricane.

The infamous storm left 1,000 people homeless and caused about $4.5 million in damage – the equivalent of about $75 million today. But with the chaos of a hurricane also comes creation.

As often happens after a large storm, the beachfront was dramatically changed, and Mrs. Cecil Appleberry decided to investigate.

She was not disappointed. In fact, she was delighted. Piled high on the beaches and mixed in with the storm debris was a large collection of fish, shells, and animal life she had never seen before. The snake-wrangling 4-year-old awoke inside of her, and an idea began to form.

She set up a shell exhibit at Seagate School and gave talks on nature and sea life. She was incredibly passionate about the subject and was known to deliver five speeches in one day.

Her passion spread, as did her fame. She became popular through both word of mouth and print. Her small shell exhibit eventually grew to a live sea animal exhibit at the Lumina Pavilion with support from Hugh MacRae and his Tidewater Power Company.

Appleberry’s ambitions did not stop there. She started Appleberry’s Marine Museum, a makeshift collection of seawater exhibits that lived at the Wrightsville Beach ABC store during the off-season. Mrs. A thought the large shelves that usually stored liquor were the perfect apparatus to hold her shell collection and other exhibits.

The space was called Appleberry’s Marine Museum for nine months out of the year, but the sign out front still read ABC. After closing the exhibit down one day, Mrs. A stepped outside to drink a Coca-Cola. Two women were strolling by and one whispered to the other: “Just look at that brazen hussy drinking in broad daylight!”

This became one of Appleberry’s favorite stories, and she would tell it often.

The reputation she earned as a naturalist soon got the attention of Theodore Empie, the authority on birdwatching in North Carolina.

Empie had a hunch that Wilmington held the largest count of bird species in the state. He suffered from terrible arthritis that prevented him from testing his theory, and so he sought out Appleberry. He approached her about the project in 1942. When she complained that she knew nothing about birds or birding, he issued her a pair of binoculars and a famous reply. “You can learn.”

And learn she did. She was slow at first and impeded by poor eyesight but, with instruction from experienced birders, she found that she had a real knack for it. She went on to surpass Empie as the foremost authority on birding in the state.

Her incredible sense of hearing all but made up for visual impairment. Hearing and noting a bird’s song can be just as important in identifying its species as simply viewing it.

In 1947 she heard a complaint from an out-of-town traveler that Wilmington had no real bird club. She declared: “Certainly we have a bird club, and I’m the president of it.”

She called a meeting of 14 bird enthusiasts and friends that same night.

“Today I have founded the Wilmington Bird Club, appointed myself president, and I have a slate of officers which I would like you to adopt unanimously,” she said.

One of the 14 jokingly responded, “President? She means dictator!”

And so, the Wilmington Bird Club was born.

Dictator or president, the club thrived under Appleberry’s leadership and went on to gain national recognition. In 1950, club members and college volunteers set out to compile an accurate bird species count for the region. The species count was as low as 68 when Mrs. A took charge. However, her bird-watching militia spotted 184 species.

She was elected president of the North Carolina Bird Club in 1958, 16 years after Empie first passed the torch to her.

For the rest of her life she advocated for the protection of all wildlife, especially the rare birds and carnivorous plants that are native to the region. She emphasized the importance of young people and helped many students find their life’s calling.

Mrs. A’s life is a testament to the power of curiosity and her legacy teaches us an important lesson: if you find a pretty worm you should pick it up, even if it turns out to be a snake.