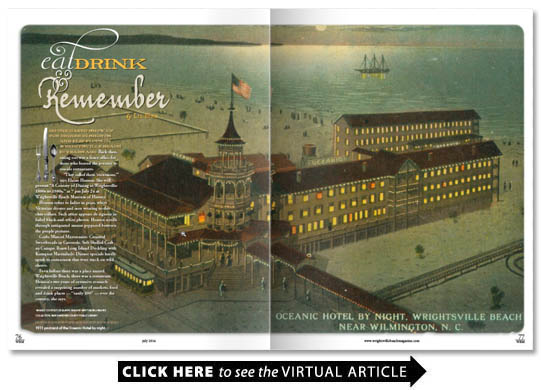 No one dared show up for dinner in shorts and flip flops on Wrightsville Beach 100 years ago. Back then eating out was a fancy affair for those who braved the journey to seaside restaurants.

They called them  excursions  says Elaine Henson. She will present  A Century of Dining at Wrightsville: 1880s to 1980s   at 7 pm July 24 at Wrightsville Beach Museum of History.

Even before there was a place named Wrightsville Beach there was a restaurant. Henson s two years of extensive research revealed a surprising number of markets food and drink places —  easily 100  — over the century she says.

Henson found the first dining room and every one that followed. Fussy menus formal dress and difficult travel for the sake of dining are just some of the surprises Henson dishes up.

It wasn t like it is today   Henson says raising her eyebrows over her reading glasses.  Not at all.

The area s first restaurants like most early eateries in what would become the town of Wrightsville Beach were dining rooms inside two hotels: Sea Side Park and Pine Grove House. They debuted in 1884 not on the beach but on the Wrightsville Sound mainland Henson points out because at the time boats were the only way to reach Ocean View Beach Wrightsville s original name.

In the late 1880s when Wilmington Seacoast Railroad Co. ran the Beach Car Line from downtown Wilmington s Front Street to the Hammocks now Harbor Island and tracks were extended across Banks Channel to the beach a year later dining rooms emerged to serve an expanding market.

At least four hotel dining rooms dotted the Wrightsville shoreline by the late 1800s. The first was Hinton s Cafe at the circa 1892 Ocean View hotel Henson says. A September 1892 Wilmington Messenger article congratulates owners E.L. and J.H. Hinton for having the summer season s most successful restaurant. Henson says the Hintons also ran accommodations in Wilmington and Carolina Beach.

The article extolls   the unrivaled manner in which soft shell crabs deviled crabs picked crabs shrimps pigfish clam chowder etc. has been served to the delegation of epicurean visitors to the seashore.

Significant is the article s mention of the Ocean View manager — not a man as might be expected in the period s male-dominated working world but a woman   Mrs. W.E. Mayo proprietress   Henson says. Wrightsville Beach Museum executive director Madeline Flagler agrees.

It was one of the things a woman could do with a family if her husband passed away   Flagler says.  It was something you could do and do well and still have a real life.

Guest cottages were common but grand hotels clustered near the Banks Channel bridge garnered attention for elite menus and dining events. Whether tourists lodged in the hotels or came just for the day it was the norm to dine at hotel restaurants Henson says.

A pack of 10 meal tickets for $5 entitled Hotel Tarrymoore guests to  cuisine unsurpassed   according to a 1905 advertisement. Tarrymoore opened that year was later renovated and then reintroduced in spring 1911 as the magnificent peaked and electric-light-strung Oceanic. Bills of fare reflected elegant French cuisine that characterized the area s menus. Still humble local favorites (broiled Spanish mackerel clam fritters candied sweet potatoes corn on the cob) were served too.

Fresh food was not trendy as today but mandatory. Lack of refrigeration required frequent train and after 1902 trolley deliveries of ice and provisions.

Most food was grown and raised nearby Henson says. Cattle that supplied milk and meat grazed near the shore or on present-day Harbor Island. The island town was incorporated in 1899. Henson recalls one hotel fire news report that mentioned yard chickens cooked by the blaze.

Nearly everything was made from scratch and safe food handling was demanding Henson says. In 1919 state inspectors examined Oceanic after the N.C. Board of Health in Raleigh received complaints. Inspectors found dirty tableware flies in the kitchen due to lack of window screens water that tasted of decayed wood and warm stinking ice boxes awaiting ice deliveries.

When an inspector dined that evening he was served spoiled fish and a fly floating in his iced tea.

The hotel received a health score of 51 out of a possible 100.

The following year an improved Oceanic advertised  a staff of kitchen employees especially skilled in the preparation of seafoods.  The dining room remained popular until a massive 1934 fire leveled Oceanic and 102 other buildings.

Marina Grill opened in 1946 in abandoned World War II Marine Corps barracks on the Wrightsville Beach Causeway. The restaurant boasted an approval seal from Duncan Hines then regarded  The American authority on good eating  rather than the king of cake mix. In 1947 a Marina  deluxe  two-course seafood dinner with a choice of one entree — shrimp Newburg fried frog legs and shad roe with bacon among them — and fries clam fritters and coleslaw on the side cost $1.50.

One of the most popular oyster roasts was the two-story Faircloth s. Located in the vicinity of the current Bridge Tender on Airlie Road Faircloth s hosted separate dining rooms and a dock for commercial fishers.

It was like a house   Henson says.  They didn t knock down the walls and make one big dining room.

Faircloth s launched in 1945 and demolished in 1981 was so popular it sponsored a huge float in Wilmington s 1953 Azalea Festival parade.

People tell me they knew they were almost at the beach when they could smell Faircloth s   Flagler says.

One beloved oyster roast was not at Wrightsville Beach Henson says. Visitors felt it worth the drive to Cabbage Inlet Lane on Masonboro Sound to visit Uncle Henry s which advertisements say began in 1900.

In what looked like an old one-story house   Uncle Henry  Kirkum bragged  one nibble and you re hooked.  Hurricane Hazel destroyed the restaurant in 1954 but it was rebuilt and as late at 1989 was advertising seafood platters for $8.50.

The famous Lumina Pavilion (1905-1973) staged formal ballroom dances but also hosted a grill in the mid-1900s. Seaside Soda Shop and Grocery operated next door. Newell s Soda Shop a popular teen hangout dating to 1934 was at Station 1 the trolley line s first stop near what is now the intersection of Lumina Avenue and Waynick Boulevard.

It was tremendously popular   Henson says.  I went there along with everybody else. It was a hot place.

Henson and Flagler know that for  A Century of Dining at Wrightsville: 1880s to 1980s  attendees will bring their own precious recollections.

Those are very deep memories   Flagler said.  Different eating establishments are so much part of the culture here. You go to the beach and you re there all day and somehow the food tastes better when you re sunburned.