Easy Living Beside the Boat Basin 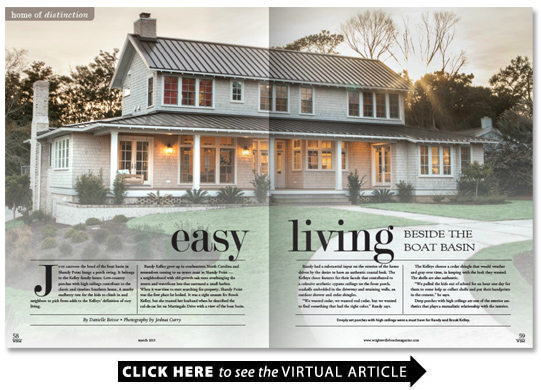 Just around the bend of the boat basin in Shandy Point hangs a porch swing. It belongs to the Kelley family home. Low-country porches with high ceilings contribute to the classic and timeless Southern home. A nearby mulberry tree for the kids to climb in and neighbors to pick from adds to the Kelleys’ definition of easy living.

Randy Kelley grew up in southeastern North Carolina and remembers coming to an oyster roast in Shandy Point — a neighborhood with old growth oak trees overhanging the streets and waterfront lots that surround a small harbor. When it was time to start searching for property Shandy Point was the first place he looked. It was a sight unseen for Brook Kelley but she trusted her husband when he described the cul-de-sac lot on Martingale Drive with a view of the boat basin.

Randy had a substantial input on the exterior of the home driven by the desire to have an authentic coastal look. The Kelleys chose features for their facade that contributed to a cohesive aesthetic: cypress ceilings on the front porch seashells embedded in the driveway and retaining walls an outdoor shower and cedar shingles.

“We wanted cedar we wanted real cedar but we wanted to find something that had the right color ” Randy says.

The Kelleys choose a cedar shingle that would weather and gray over time in keeping with the look they wanted. The shells are also authentic.

“We pulled the kids out of school for an hour one day for them to come help us collect shells and put their handprints in the cement ” he says.

Deep porches with high ceilings are one of the exterior aesthetics that plays a mutualistic relationship with the interior.

Brook and Randy Kelley started visiting Southern coastal towns to observe different features they wanted to include in their custom home designed by architect Virginia Woodruff and built by David James and Co.

“We drove around looking for that classic timeless coastal house and wanted to accentuate the things we really liked like the deep porches that you see in those historic and coastal houses ” Randy says. “The porch designs on the house were the drivers.”

The Kelleys spent ten months in the architectural brainstorming process with Woodruff. Their goal was a detailed set of plans that would save them from making last-minute decisions while building.

Brook who worked as a bookkeeper for Lindsay Henderson an established interior designer in Greensboro envisioned the interiors with Lindsay as a creative resource.

With six pairs of French doors large transom windows and ten-foot ceilings natural daylight pours into the main body of the house illuminating the soft neutrals chosen for the living room furnished in a style that combines the coastal influence with clean lines.

“They wanted a totally unique house ” Woodruff says. “To me the house was how we conceived it when it was built.”

The Kelleys were active in the construction phase and enjoyed being part of the process.

“It is fun to work with owners that are involved. We build the house that they want because they are involved with all of the decisions ” David James says.

The Kelley house was also the most energy-efficient house he has ever built. An energy consultant was hired as part of the construction process and the Kelleys decided to use a solar water heater and geothermal HVAC.

“The house will use about 50 percent of what another house would that wasn’t constructed with all the improvements ” James says.

The varying widths in the reclaimed hardwood floors are a distinctive juxtaposition to the symmetrical six-inch boards of cypress on the ceiling.

“We wanted reclaimed because we wanted to be able to see the scars the knots and the wormholes ” Randy says. “We didn’t want bright and shiny we wanted natural and neutral.”

The Kelleys decided to carry the white shiplap walls throughout the downstairs.

“We were trying to determine a white for the walls we had been though fifty shades of white ” James says.

The upper floor supports a spacious children’s play room and bedroom suites overlooking the front lawn. The character of the lower floor is reiterated in reclaimed barn wood floors. Pops of color in minimal artwork and accessories bring an unexpected flare to the rooms.