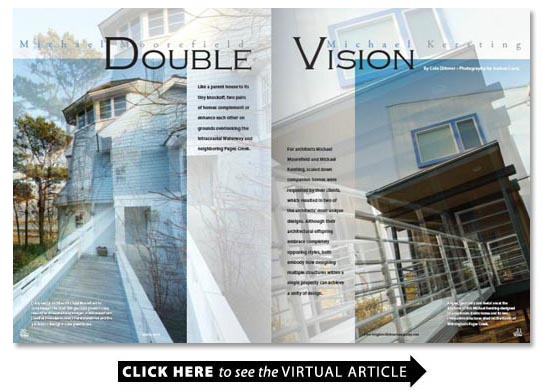 Like a parent house to its tiny knockoff two pairs of homes complement or enhance each other on grounds overlooking the Intracoastal Waterway and neighboring Pages Creek. For architects Michael Moorefield and Michael Kersting scaled down companion homes were requested by their clients which resulted in two of the architects most unique designs. Although their architectural offspring embrace completely opposing styles both embody how designing multiple structures within a single property can achieve a unity of design.

A rambling Shingle Style home hearkening to the work popularized by Robert Stern and Robert Venturi in the mid 20th century was not what Michael Moorefield initially had in mind for his next project. It was the mid 90s. Having just completed a Japanese modernist home on Bald Head Island Moorefield says he was apprehensive when his clients the original owners of a waterfront Landfall property mentioned Sterns Shingle Style as an aesthetic they admired.

Moorefields attitude changed when research revealed a design characteristic with which he could identify.

Instead of looking at the work of Robert Stern I went back to the roots of that style Moorefield says. What I discovered in the Shingle Style house is that it was a very modern style in a way and it was those architects using the materials they had at hand to do houses where geometry played a huge role but not a limiting role.

Borrowing from that late 19th century seacoast style its use of geometry and an asymmetrical floorplan would be crucial in designing a home to fit the irregular site. The structure was originally intended to be split into two where the natural wetland cuts through the middle of the lot and empties into the Intracoastal Waterway. A question of how to incorporate the narrow bluff that rises on the south side of the site gave rise to a structure that is one of the most identifiable in Landfall from both land and sea.

The idea of designing something intentionally to mimic a lighthouse didnt excite me all that much because I usually like to deal with things a little more organically. But the way I rationalized it was that the structure organically fit onto the property Moorefield says.

The result was a three-story tower clad in steel blue cedar shingles accented by a multitude of white-framed windows of varied styles. Although this tall vertical form appears separate from the rest of the complex at first glance it is actually on a diagonal axis from the parent homes southern elevation also designed in the shape of an octagonal tower.

The main house developed on a diagonal theme and so there is a counterpoint on the main house.  Those two towers stand in counterpoint across the garden Moorefield says. The idea was to make the guesthouse have a unique and distinct character but to still be part of a complex.

Designing a guesthouse of this shape to sleep the maximum number of visiting family members was no easy task Moorefield says.

When designing something that small you would really like to do it compact and simple but because of the nature of that site it just wasnt possible so we have winding stairs and hallways Moorefield says of the interior layout.

The first floor of the lighthouse harbors a comfortable living room and kitchenette with large bay windows on the eastern wall looking out to grassy marsh islands and a navigable waterway. As was the case with all of the interior design choices in the lighthouse no frills cabinetry pine flooring and interior accents characterize the living room and kitchenette. All interior features are subdued and scaled back elements found in the main house.

Adjacent to the living room is an airy full-sized bedroom with sky-blue walls. A large window looks to the east over the waterway to the north end of Wrightsville Beach.

The bunkroom on the right at the top of the second floor landing can comfortably sleep four of the familys smaller guests on the built-in wooden bunks. In the bedroom across the hall two arched windows offer views to the southeast over the water to the southwest back to the main house and the gardens between them.

The entryway to the lantern room is at the end of the second floor hallway. For nautical flair and practicality Moorefield says the seven-rung ships ladder to the tower was custom made for the project. The vantage point offers a nearly 360-degree view of the surroundings with triple-paned casement windows covering most of the eight sides. A painting of open sky with soft clouds and a gull soaring overhead is on the ceiling which enhances the feeling of being completely surrounded by nature.

Surrounded by nature was also one of the variables Michael Kersting had to keep in mind when designing a collection of structures sited on the point on Pages Creek.

When asked to build a modernist home on a parcel that had been in one of the homeowners family for decades Kersting says his clients offered very few restrictions other than low maintenance and space for one owners avid woodturning hobby.

Given the sites natural setting Kersting says he could have either chosen to design a home that stood out or a home that blended into the landscape. He chose the former and the result was two square metal structures that are identical in width length roofline exterior accents and sustainability.

It was all about living out in nature and when you are in the house you have a commanding view of Pages Creek Kersting says.

After moving from Boston where they lived in a Queen Anne Victorian Style home the owners said they wanted something radically different. They lovingly call their new home a metal box. Ironically when designing the metal box house and its companion studio and tractor shed/greenhouse   Kersting says he was thinking of a wooden cube puzzle.

The house was loosely based on taking little pieces and combining them to form that cube. It was kind of an architects trick. If you were a giant you could pick up the main house and set it on top of the studio and it would make a perfect cube he says.

She wanted to do something much more contemporary and felt we were up to the task of creating a new contemporary vision for what otherwise was an older neighborhood and not nearly as radical as this Kersting says.

The decision to wrap the main two-story one-bedroom home and the woodturning studio in galvanized steel solved both of the owners requests for sustainable and low-maintenance living.

We wanted it to be as sustainable as possible as far as low maintenance so we chose to clad the house in galvanized metal with accents of coreten steel Kersting says.

Another sustainable choice was the inward sloping roofs. The roof shape allows rainwater to funnel into two pipes that lead to individual rainwater cisterns. Once the sites landscaping is complete the rain-water will be reused for irrigation.

The steel siding was a blank canvas. Each window has its own personality and engages it in an abstract manner Kersting says. By adding these components to the outside of the primary cubic volume it begins to take on life and more of an artistic flair more of an expression of the things man can do in this very natural setting.

An aluminum ramp used instead of stairs for its marine feel and practicality leads to the single story woodturning studio that lies 10 yards from the main homes footprint.

The one-level studio designed specifically for woodturning supports lathes and other tools and provides the woodturner with abundant natural light. The studio floor is a poured concrete pad with epoxy coating and just like the main house the floorplan is completely open. Natural light is provided through large windows looking onto the creek and a skylight in the roof or if weather permits through the large garage-style door. When the weather does not permit the conditioned space maintains the studios climate for long hours of woodturning.

A tractor shed and greenhouse to the west of the studio is a recent addition to the metal box enclave. Although it is not a perfect 32-foot square like the others the shed is also wrapped in galvanized metal. Along with the tractor it is home to the south-facing greenhouse.

They are able to live a comfortable existence on a beautiful site and they can walk right outside the door and engage in their hobbies Kersting says of his clients. It seems to work perfectly and it engages Pages Creek wonderfully too so you are always aware of what is going on outside.