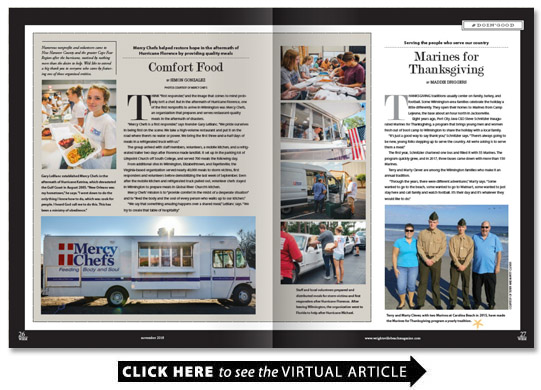 Think “first responder ” and the image that comes to mind probably isn’t a chef. But in the aftermath of Hurricane Florence one of the first nonprofits to arrive in Wilmington was Mercy Chefs an organization that prepares and serves restaurant-quality meals in the aftermath of disasters.

“Mercy Chefs is a first responder ” says founder Gary LeBlanc. “We pride ourselves in being first on the scene. We take a high-volume restaurant and put it on the road where there’s no water or power. We bring the first three-and-a-half days of meals in a refrigerated truck with us.”

The group arrived with staff members volunteers a mobile kitchen and a refrigerated trailer two days after Florence made landfall. It set up in the parking lot of Lifepoint Church off South College and served 700 meals the following day.

From additional sites in Wilmington Elizabethtown and Fayetteville the Virginia-based organization served nearly 40 000 meals to storm victims first responders and volunteers before demobilizing the last week of September. Even after the mobile kitchen and refrigerated truck pulled out volunteer chefs stayed in Wilmington to prepare meals in Global River Church’s kitchen.

Mercy Chefs’ mission is to “provide comfort in the midst of a desperate situation” and to “feed the body and the soul of every person who walks up to our kitchen.”

“We say that something amazing happens over a shared meal ” LeBlanc says. “We try to create that table of hospitality.”

Thanksgiving traditions usually center on family turkey and football. Some Wilmington-area families celebrate the holiday a little differently. They open their homes to Marines from Camp Lejeune the base about an hour north in Jacksonville.

Eight years ago Port City Java CEO Steve Schnitzler inaugurated Marines for Thanksgiving a program that brings young men and women fresh out of boot camp to Wilmington to share the holiday with a local family.

“It’s just a good way to say thank you ” Schnitzler says. “There’s always going to be new young folks stepping up to serve the country. All we’re asking is to serve them a meal.”

The first year Schnitzler chartered one bus and filled it with 55 Marines. The program quickly grew and in 2017 three buses came down with more than 150 Marines.

Terry and Marty Clever are among the Wilmington families who make it an annual tradition.