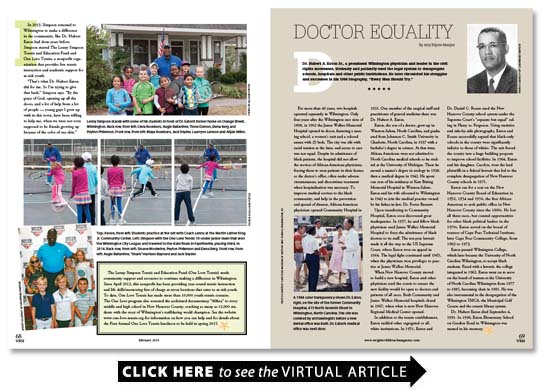 Dr. Hubert A. Eaton Sr. a prominent Wilmington physician and leader in the civil rights movement tirelessly and patiently used the legal system to desegregate schools hospitals and other public institutions. He later chronicled his struggles and successes in his 1984 biography Every Man Should Try.

For more than 40 years two hospitals operated separately in Wilmington. Only four years after the Wilmington race riots of 1898 in 1902 the James Walker Memorial Hospital opened its doors featuring a nursing school a women s unit and a colored annex with 25 beds. The city was rife with racial tension at the time and access to care was not equal. Despite its admittance of black patients the hospital did not allow the services of African-American physicians forcing them to treat patients in their homes or the doctor s office often under adverse circumstances and discontinue treatment when hospitalization was necessary. To improve medical services to the black community and help in the prevention and spread of diseases African-American physicians opened Community Hospital in 1921. One member of the surgical staff and practitioner of general medicine there was Dr. Hubert A. Eaton.

Eaton the son of a doctor grew up in Winston-Salem North Carolina and graduated from Johnston C. Smith University in Charlotte North Carolina in 1937 with a bachelor s degree in science. At that time African Americans were not admitted to North Carolina medical schools so he studied at the University of Michigan. There he earned a master s degree in zoology in 1938 then a medical degree in 1942. He spent one year of his residency at Kate Bitting Memorial Hospital in Winston-Salem. Eaton and his wife relocated to Wilmington in 1943 to join the medical practice owned by his father-in-law Dr. Foster Burnett.

Upon transferring to Community Hospital Eaton soon discovered great inadequacies. In 1957 he and fellow black physicians sued James Walker Memorial Hospital to force the admittance of black doctors to its staff. The ten-year lawsuit made it all the way to the US Supreme Court where Eaton won on appeal in 1964. The legal fight continued until 1965 when the physicians won privileges to practice at James Walker Memorial.

When New Hanover County moved to build a new hospital Eaton and other physicians used the courts to ensure the new facility would be open to doctors and patients of all races. Both Community and James Walker Memorial hospitals closed in 1967 when what is now New Hanover Regional Medical Center opened.

In addition to the tennis establishment Eaton tackled other segregated or all- white institutions. In 1951 Eaton and Dr. Daniel C. Roane sued the New Hanover County school system under the Supreme Court s separate but equal ruling in Plessy vs. Ferguson. Using statistics and side-by-side photographs Eaton and Roane successfully argued that black-only schools in the county were significantly inferior to those of whites. The suit forced the county into a huge building program to improve school facilities. In 1964 Eaton and his daughter Carolyn were the lead plaintiffs in a federal lawsuit that led to the complete desegregation of New Hanover County schools in 1971.

Eaton ran for a seat on the New Hanover County Board of Education in 1952 1954 and 1956 the first African American to seek public office in New Hanover County since the 1890s. He lost all three races but created opportunities for other black political leaders in the 1970s. Eaton served on the board of trustees of Cape Fear Technical Institute later Cape Fear Community College from 1963 to 1973.

Dr. Hubert Eaton died September 4 1991. In 1996 Eaton Elementary School on Gordon Road in Wilmington was named in his memory.