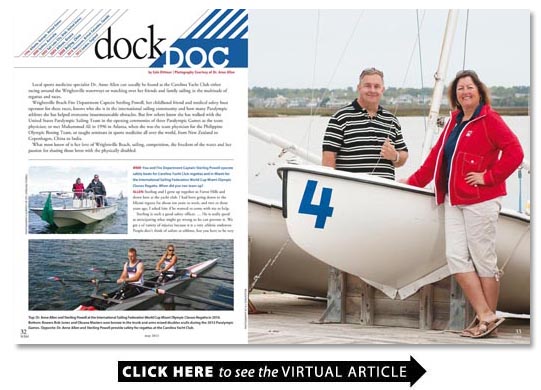 Local sports medicine specialist Dr. Anne Allen can usually be found at the Carolina Yacht Club either racing around the Wrightsville waterways or watching over her friends and family sailing in the multitude of regattas and races.

Wrightsville Beach Fire Department Captain Sterling Powell her childhood friend and medical safety boat operator for these races knows who she is in the international sailing community and how many Paralympic athletes she has helped overcome insurmountable obstacles. But few others know she has walked with the United States Paralympic Sailing Team in the opening ceremonies of three Paralympic Games as the team physician; or met Muhammad Ali in 1996 in Atlanta when she was the team physician for the Philippine Olympic Boxing Team or taught seminars in sports medicine all over the world from New Zealand to Copenhagen China to India.

What most know of is her love of Wrightsville Beach sailing competition the freedom of the water and her passion for sharing those loves with the physically disabled.

WBM: You and Fire Department Captain Sterling Powell operate safety boats for Carolina Yacht Club regattas and in Miami for the International Sailing Federation World Cup Miami Olympic Classes Regatta. When did you two team up?

ALLEN: Sterling and I grew up together in Forest Hills and down here at the yacht club. I had been going down to the Miami regatta for about ten years to work and two or three years ago I asked him if he wanted to come with me to help.

Sterling is such a good safety officer. He is really good at anticipating what might go wrong so he can prevent it. We get a of variety of injuries because it is a very athletic endeavor. People dont think of sailors as athletes but you have to be very athletic to sail a lot of these boats especially the Paralympic sailors.

WBM: When did you know you wanted to be a sports medicine doctor?

ALLEN: I dont know if I ever thought this was totally going to be my career but I do remember when I was 12 years old and I was reading a world record book and I wanted to set a world record. I thought well maybe that is not going to happen but Id like to go to the Olympics as an athlete. Then I started thinking well maybe Im not a good enough athlete but Im going to go as a doctor. I knew that at age 12.

WBM: You were practicing medicine and on staff at Emory University in Atlanta teaching spine and sports medicine. When did you begin thinking about your passion for sailing from a medical perspective?

ALLEN: I was on a plane reading an article about the womens Americas Cup team and how they had a trainer who was doing strength training with them and then a light bulb went off in my head I remember the moment and I think these women and the Americas Cup sailors have sports injuries like all the other sports athletes and no one has ever

researched or documented it.
So I took the Delta magazine called the editor and asked him how to get ahold of the trainer in the picture Dick Dent. I get Dick Dent on the phone who eventually said Well Doc I just talked to Bill Koch and basically the only way we can show you how important it is for you to do this research is to get you out here on this boat so how soon can you get here?

I went to the department head at Emory where I was on faculty and said I need to go. If you dont want to let me go Im quitting because this could make or break my career. Im going to go. She said Thats fine go.

The nice thing about working and living in Atlanta was I got opportunities to work at very high levels of sports medicine and then started working a lot with the Americas Cup.
I started developing a lot of the sports medicine and sailing literature based on the research I was doing. I did that with the Volvo Ocean Race which is the around the world race and got on with the Olympics and Paralympics when they came to Atlanta in 1996.

WBM: How did you become involved in the 1996 Olympics and Paralympics?

ALLEN: When I moved to Atlanta I started racing sailboats and I had started getting involved in the Olympics and the Olympic sailing program which at the time was in Savannah. I was also doing the Olympics in Atlanta because I was covering badminton as well. The organizers of the Paralympic medical staff came to me and said they really wanted me to run the medical event venue at sailing because I sail and because I was a rehab specialist and understand these disabled athletes. So I said Sure and that was the first year sailing was a full Olympic sport in the Paralympic games.

WBM: What was your role in the Atlanta Olympic Games?

ALLEN: I was taking care of the Philippine Boxing Team. One of my colleagues from the Philippines had called me and said Our boxing team is our only hope for a medal. They are coming to Atlanta six months early. Would you please take care of them?

That was actually a very difficult time because I was in the park during the bombing. I was one of three doctors in the park and its not something I really ever talked about or ever really wanted to go into. They wanted me on the Today show the next day and I said no. There were people calling me from around the world saying Oh my God we saw you on CNN International telling the media to get the hell out of your triage room.

One of the military guys that came in told me Theres another bomb get out! And I look at all these people around me and have to literally say to myself You can run or you can stay and take care of people and if you die trying you die trying to take care of the people that are hurt. I didnt go anywhere. I stayed right there and thank God they diffused the second bomb because there was another one.

WBM: What does a sport like sailing offer to disabled athletes and Wounded Warriors?

ALLEN: We all learn from our experiences and I think [the Centennial Park Bombing] has helped me understand more of what these Wounded Warriors have gone through. It makes me want to do more in helping them in their sports and athletic endeavors.

Technology wise the adaptive equipment has just been amazing with what has been developed. We actually have people now that can race a sail boat from a sip and puff ventilator control.

One of the best experiences Ive had at the games was with [Nick Scandone] who was an able-bodied North American 470 [sailing] champion that developed ALS. He became eligible in Paralympics as he got weaker and should have only lived five years but made it six and a half because he was determined to go to China for the Beijing games in 2008 to win a gold medal for the United States.

I was the team doctor so before we went over there I had to ask him if he wanted to be on a ventilator in case he went down during the games. He kept saying Doc Im not going to need that because Im going to get that gold medal and then Ill come home to rest.
It was one of the most amazing things to be on that racecourse when he won and sealed that gold medal victory for the US. When he got up on the medal stand it was just an incredible feeling just knowing the accomplishment from beating his disease long enough.
When we flew home from China I knew it would be the last time I saw him and he sat there and put that gold medal around my neck and said Thanks Doc for all you have done for me and we took a picture together. He passed away two months later.

WBM: How has the global awareness changed about disabled athletes and the Paralympics since you became involved?

ALLEN: Before the Beijing games most of the disabled people in China were basically shunned. When all of these disabled athletes were coming in from all over the world essentially as heroes it changed the thinking and sparked a huge cultural revolution. The press in China said the biggest legacy the Olympic and Paralympic games would leave in the country would be its national awareness of what the disabled population can actually do. It is a unifying thing. Just as the Olympics unify many different countries the Paralympics unify the disabled and able bodied all at the same time.

WBM: When was the first time you got to walk out during the opening ceremony with the US team for an Olympic or Paralympic event?

ALLEN: The first time I got to walk with the team was in the 2004 Athens Summer Paralympic Games. It is the most amazing feeling you can ever imagine to represent the United States to follow behind the flag of the United States of America as you walk in that stadium. I got to do that again in China and most recently in London and it doesnt change. It is always so special to walk with the US team just knowing how hard everyone worked to get there. It is really probably the biggest honor you could have in your life but I tell you it is also a big honor being able to take care of your family and friends from your hometown too.

Out of all the places in the world I have traveled to and spent time working in I would rather live work and play at Wrightsville Beach than anywhere. Not only because it is home but because it is one of the most beautiful places and the people here are fantastic.