Dining on the Water 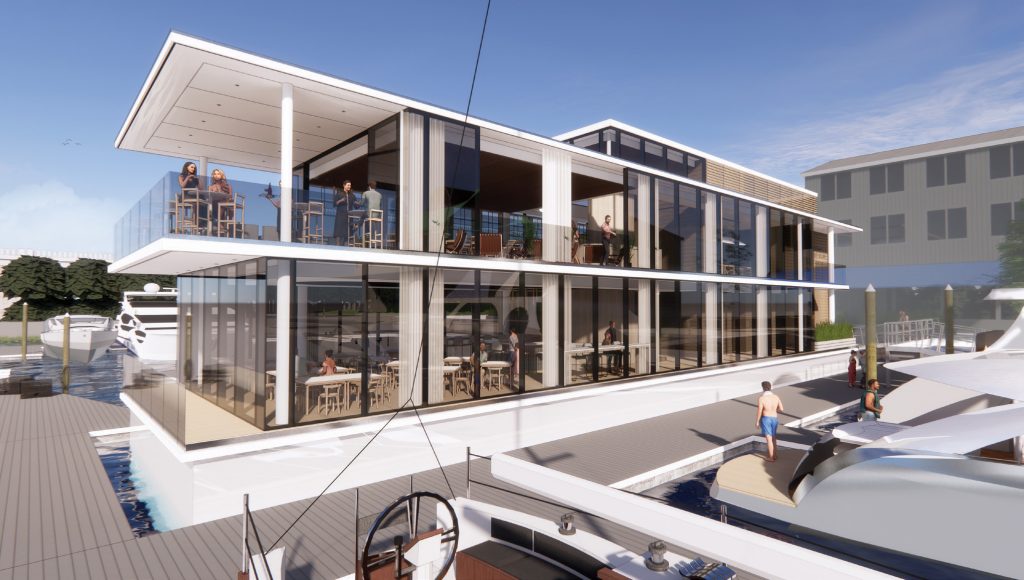 Wrightsville Yacht Club’s new restaurant will float on the Intracoastal Waterway, between the docks at Wells Marine Insurance and Riggs Yacht Sales. Rendering by Kersting Architecture

A Kersting Architecture-designed restaurant that will float on the Intracoastal Waterway is coming to Wrightsville Beach Marina in the summer of 2022.

Wrightsville Yacht Club is the parent company of Wrightsville Beach Marina. The 6,000-square foot, state-of-the-art facility, to be built by Monteith Construction, is designed to seat 150. Once complete, this floating restaurant, bar and terrace is expected to put Wrightsville Beach on the map like never before.

“We are a major stopping point as the fleets move from the southern locations up to New England,” says Sam Clary, Wrightsville Beach Marina and Yacht Club manager. “They’re staying in larger and larger amounts of time as our area has grown. These types of amenities are common in the more metropolitan areas, so we wanted to follow suit.”

The vision was Clary’s, who started working at the marina as a dockhand in 1987 while attending the University of North Carolina Wilmington.

“We wanted to do something that has a real wow factor and be completely unique and an opportunity to give someone an experience they will never forget,” Clary says.

Michael Ross Kersting is an award-winning and nationally acclaimed architect behind some of the coast’s most luxurious, innovative modern designs. With this project, he takes it to a whole new level.

“We quickly realized we’re not designing a boat and we’re really not designing a building. It’s this unique hybrid where it’s floating among the yachts, yet attached to the landscape,” says Kersting who opted for floor-to-ceiling glass walls to optimize the view. “We’re getting away from load bearing walls and building more of a glass-and-steel type structure with steel columns and steel supports everywhere, which frees up the walls so they’re not structural. There are a lot of thin lines; it’s more sleek. We’re trying to really create an image. As people cross the bridge, they’re going to see this place and say, ‘I need to go there.’”

A portion of the restaurant will be open to the public while other sections will be exclusive to Yacht Club members.

Monteith Construction plans to build the restaurant on top of a barge anchored to deep set engineered pilings so it can rise and fall with the tides.

“Ninety percent of the construction will take place off site and then we will tow it in place,” Monteith president Bryan Thomas says.

The barge will likely be built out of state and brought to a location near the Cape Fear Memorial Bridge. The restaurant then will be constructed in a three-step process.

“Typically, at our annual meetings no members show up, but this past meeting we had at least a dozen here all asking questions about the restaurant and club. They’re excited to see this moving forward,” Allen says. “We want to make this something for the community and something that draws people in from all over the world, certainly from all over the state.”

Kersting Peridot Interiors, led by Leslie Stachowicz, will handle all interiors in what the team describes as a minimal palette of wood, glass and fabrics plus a centralized showpiece staircase.

“People will enjoy the experience of going up and down from the restaurant to the bar and it becomes a piece of art on its own that defines the interior,” Kersting says.

“This is for everyone,” he says. “Think of all the wedding proposals that will happen or the business deals. I think it will become part of the culture of the beach, what it feels like to be at Wrightsville Beach and how people perceive the area.”