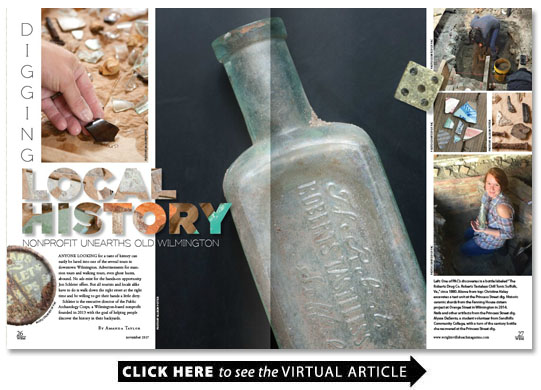 Anyone looking for a taste of history can easily be lured into one of the several tours in downtown Wilmington. Advertisements for mansion tours and walking tours even ghost hunts abound. No ads exist for the hands-on opportunity Jon Schleier offers. But all tourists and locals alike have to do is walk down the right street at the right time and be willing to get their hands a little dirty.

Schleier is the executive director of the Public Archaeology Corps a Wilmington-based nonprofit founded in 2013 with the goal of helping people discover the history in their backyards.

he Public Archaeology Corps (PAC) studies theunwrittenhistoric record that lies buried beneath the ground specifically on building and home sites that might be covered forever by development.

“We formed to protect and address the problem of archaeological site loss on privately owned land ” Schleier says. “We have a long and varied history in this area and not much work has been done.”

Schleier is happy to give an impromptu history lesson to anyone who wanders by a site — and even put them to work. It’s all part of his plan to make the public aware of the archaeology around them.

“The general public they know that archaeology is around but may not be aware that it happens here ” Schleier says. “We’re trying a hearts-and-mind approach of public education.”

Most of the work is done by local archaeologists historians University of North Carolina Wilmington students and volunteers with at least some experience.

She was a volunteer assistant for UNCW’s archaeological field school at Brunswick River Park in Belville when a few students told her they were going to volunteer with PAC over the weekend. Gimbal tagged along and continued to help when available.

“I recommend PAC frequently to non-archaeologists because it’s a free local resource to learn more about Wilmington’s history in an active way ” she says.

The downtown dig was a great opportunity to tell questioning passersby about the project and organization and an even bigger bonus for those who accepted an impromptu invitation to join in the fun.

It is rare Gimbal notes for volunteers including her to participate in such a hands-on experience. It’s even more rare to include inexperienced community volunteers on serious archaeological digs.

“It’s a popular debate in the field how to involve community stakeholders in archaeology without putting significant cultural resources at risk from mishandling/looting ” she says. “I think PAC addresses this issue by involving non-archaeologists in a controlled environment using the same methods you’ll learn as an archaeology student at a university.”

The Princess Street dig at what Schleier believes to be part of a blacksmith shop was the first stage of the process. Since it ended Schleier has been sifting through the findings hoping to catch something telling of the city’s history.

Distinguishing artifacts that are worthy enough to keep can be difficult but he appears to do it with ease. Treasures include colorful pieces of ceramic horseshoes glass and buttons. Most of the objects found date back to the late 19th/early 20th century including a pair of small gaming dice.

PAC also found a George III coin from the 1780s. While the artifact is clearly a coin determining what is on the surface is hard by just looking at it. Schleier had to put it under a microscope to make out enough features to pin it to the late 18th century.

The coin was found near a deep green bottle Schleier describes as rare. The bottle has a marking that reads “Fuller’s Infallible Life Balsam.” After some research Schleier dated the bottle to the 1850s and said it is believed to come from the wares of what was called a snake oil peddler — a person who knowingly sold fraudulent goods.

Princess Street was the group’s third excavation site. It came about through the invitation of SDI Construction which was contracted to renovate the Pythian Building. Beth Pancoe SDI’s president and a preservationist herself invited the Public Archaeology Corps to come in with their archaeology tools and search for historical artifacts that could be ruined during the renovation process.

While SDI waited for their permits the Public Archaeology Corps began digging.

“What we want to do is work with developers and come in on their schedules and not cost them anything time or money wise and basically if there’s an archaeological resource on the land that’s going to be developed we go in there and excavate it and we’ll get what data we can — on their timeline ” Schleier says. “We don’t want to impose anything on them. If they’re gracious enough to let us in there for a week or two while they’re sorting out their permitting then we’ll go in and use what time we have to excavate the sites and recover artifacts. And then the data can be saved from it so we’ll be able to reconstruct what happened there.”

A Franklin Pierce University and East Carolina graduate Schleier says the idea of the Public Archaeology Corps came to him while he was working construction after having some trouble finding a job within his field.

He currently works for Fort Bragg’s cultural resource management program and works on PAC digs as time permits. But he’d like to make PAC work a regular gig.

“I work in archaeology but I’m kind of hoping I’ll be able to make this my full-time day job ” he says.

xcept for board members and Schleier the organization has no employees and is totally volunteer driven. Schleier hopes to have paid staff within the next three to five years but for now he relies on experienced locals who can impart knowledge to willing amateurs including many retirees.

“Volunteers alternate between digging and screening for artifacts by putting 5-gallon buckets of dirt through one-quarter-inch mesh ” Gimbal explains. “Depending on the experience level of other volunteers/passersby I might be explaining archaeological methods or the objects we were finding.”

he group’s next big project will be at the Riverplace development located on Front Street in downtown Wilmington. The developers East West Partners are allowing the organization to look into the old rock spring that sits below the property.

The rock spring has its own little folktale that Schleier knows well.

“There was this very popular natural spring in Wilmington ” he says. “There were a few natural springs in Wilmington once upon a time. I don’t know what’s happened to the other ones but this one apparently had the best tasting waters nice and cool and sweet.”

The tale dates back to the 19th century and says that if a visitor drank from the rock spring they would always return to Wilmington.

The spring was popular up until the 1920s when it started to get polluted and people eventually stopped using it. The PAC has a chance to find some significant artifacts on the site.

When the organization excavates on private property all artifacts recovered belong to the landowner. If the owner does not want them they become part of PAC’s collection often used as teaching aids. Schleier uses the artifacts on visits to area schools to help students picture what Wilmington was like back then.

“We take great measures to conserve the artifacts keeping them in good condition for future researchers. Some may wind up in a museum one day but that’s probably in the distant future ” Schleier says.