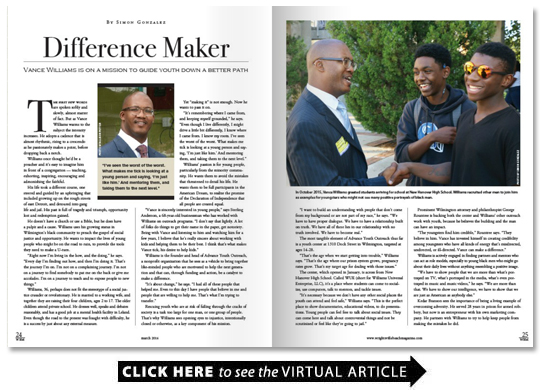 The first few words are spoken softly and slowly almost matter of fact. But as Vance Williams warms to the subject the intensity increases. He adopts a cadence that is almost rhythmic rising to a crescendo as he passionately makes a point before dropping back a notch.

Williams once thought he’d be a preacher and it’s easy to imagine him in front of a congregation — teaching exhorting inspiring encouraging and admonishing the faithful.

His life took a different course one steered and guided by an upbringing that included growing up on the rough streets of east Detroit and detoured into gang life and jail. His past is full of tragedy and triumph opportunity lost and redemption gained.

He doesn’t have a church or use a Bible but he does have a pulpit and a cause. Williams uses his growing status in Wilmington’s black community to preach the gospel of social justice and opportunity. He wants to impact the lives of young people who might be on the road to ruin to provide the tools they need to make a U-turn.

Williams 36 perhaps does not fit the stereotype of a social justice crusader or revolutionary. He is married to a working wife and together they are raising their four children ages 2 to 17. The older children attend private school. He dresses well speaks and debates reasonably and has a good job at a mental health facility in Leland. Even though the road to the present was fraught with difficulty he is a success by just about any external measure.

Yet “making it” is not enough. Now he wants to pass it on.

“It’s remembering where I came from and keeping myself grounded ” he says. “Even though I live differently I might drive a little bit differently I know where I came from. I know my roots. I’ve seen the worst of the worst. What makes me tick is looking at a young person and saying ‘I’m just like him.’ And mentoring them and taking them to the next level.”

Williams’ passion is for young people particularly from the minority community. He wants them to avoid the mistakes that threatened to derail his life. He wants them to be full participants in the American Dream to realize the promise of the Declaration of Independence that all people are created equal.

“Vance is sincerely interested in young people ” says Sterling Anderson a 68-year-old businessman who has worked with Williams on outreach programs. “I don’t say that lightly. A lot of folks do things to get their name in the paper get notoriety. Being with Vance and listening to him and watching him for a few years I believe that he’s really sincere about working with kids and helping them to be their best. I think that’s what makes Vance tick his desire to help kids.”

Williams is the founder and head of Advance Youth Outreach a nonprofit organization that he sees as a vehicle to bring together like-minded people who are motivated to help the next generation and that can through funding and action be a catalyst to make a difference.

“It’s about change ” he says. “I had all of these people that helped me. Even to this day I have people that believe in me and people that are willing to help me. That’s what I’m trying to transfer.”

Rescuing youth who are at risk of falling through the cracks of society is a task too large for one man or one group of people. That’s why Williams sees opening eyes to injustice intentionally closed or otherwise as a key component of his mission.

The most tangible element of Advance Youth Outreach thus far is a youth center at 1310 Dock Street in Wilmington targeted at ages 14-28.

The center which opened in January is across from New Hanover High School. Called WUE (short for Williams Universal Enterprise LLC) it’s a place where students can come to socialize use computers talk to mentors and tackle issues.

“It’s necessary because we don’t have any other social places the youth can attend and feel safe ” Williams says. “This is the perfect place to show documentaries educational videos to do presentations. Young people can feel free to talk about social issues. They can come here and talk about controversial things and not be scrutinized or feel like they’re going to jail.”

Prominent Wilmington attorney and philanthropist George Rountree is backing both the center and Williams’ other outreach work with youth because he believes the building and the man can have an impact.

“The youngsters find him credible ” Rountree says. “They believe in him. Vance has invested himself in creating credibility among youngsters who have all kinds of energy that’s misdirected undirected or ill-directed. Vance can make a difference.”

Williams is actively engaged in finding partners and mentors who can act as role models especially to young black men who might go about their daily lives without anything resembling a positive image.

Kedar Branson sees the importance of being a living example of overcoming adversity. He served 28 years in prison for armed robbery but now is an entrepreneur with his own marketing company. He partners with Williams to try to help keep people from making the mistakes he did.

“Vance is trying to empower youth to better themselves ” he says. “A lot of these kids have low self esteem because of their family background. Because of the way they see the world is going they don’t have any hope. Vance is building hope in a lot of them and showing yeah we care. It’s not like one day he shows up and then you don’t hear from him for a year. Vance is on the set. He’s reaching out to the community. He’s truly dedicated. He’s a person that cares and wants to see change.”

Dock Street in Wilmington is a long way from Detroit where Williams grew up got in trouble received redemption and captured the vision for his life’s work.

His father left home when Williams was 7. His mother — a good woman with a good job he says — could not handle four children including two hardheaded boys. He was in foster care beginning at age 12. The foster care system couldn’t hold him. He recounts poignant stories of living in an abandoned house at 14 and meals that consisted of all he could stuff in his mouth as he walked the aisles of grocery stores.

“I got into gangs ” he says. “That was the culture that was the way. It was a lifestyle. It was just part of what you grew up to just regular neighborhood life.”

He was hanging with some friends one day when they decided to collect an outstanding debt from someone in the neighborhood.

“They started beating him up and I joined in ” Williams says. “The police came ? and [at age 17] I wound up in prison. I did a total of six years.”

When he got out he found redemption through youth work as a drill instructor at a boot camp for at-risk youngsters and by starting his own outreach called Shock the Block.

“I taught history. I taught about their culture ” he says. “I talked to them about making the right decisions. Some did quite well but there were some who would not turn around. I had some of them fall away. I had some youth die.”

One in particular affected him deeply. A 13-year-old named Michael small for his age was killed in gang violence.

“I went to his funeral and said ‘I can’t do this anymore ‘” Williams says. “His casket was so small. I said “Is this what I really want to do?'”

After a period of re-evaluation the answer was clear: This was his calling what he was supposed to do. When the family relocated to Wilmington he began reaching out to youth and their families.

Williams knows that some will continue to fall away. But it’s worth it for the ones who turn around.