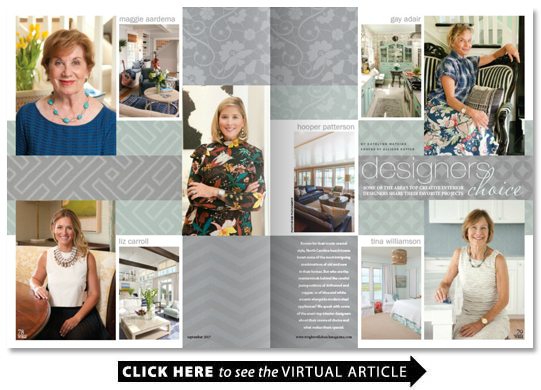 Known for their iconic coastal style North Carolina beach towns boast some of the most intriguing combinations of old and new in their homes. But who are the masterminds behind the careful juxtapositions of driftwood and copper or of blue and white accents alongside modern steel appliances? We speak with some of the area’s top interior designers about their rooms of choice and what makes them special.

As a teenager interior designer Maggie Aardema regularly visited one of the oldest beach houses on South Harbor Island. Built in the 1920s the structure emanated the quintessential style choices of the time. Until that is Aardema returned to the home as a designer and gave the living room a few refreshers.

With plenty of assistance from the homeowners Aardema selected a mixture of finishes to emphasize a casual lifestyle and a layout perfect for intimate gatherings without compromising the original formal accents.

“We wanted a very tailored feel to the room without losing the original charm ” she says.

The oak wood floor sports an uncommon mahogany inset around the perimeter of the room a feature that the designer and the homeowners highlighted using an area rug with a herringbone weave. In fact she says the rug was chosen with the 2-inch inset specifically in mind.

Aardema used the white of the trim and the preexisting gray hue of the walls to accentuate the desired contemporary vibe playing off the crispness of the colors to contrast with the traditional mantle and built-in bookcases. Furnishings encourage symmetry to allow for the owners’ musical gatherings.

“It’s the heart of the house ” says the designer adding that one stipulation of the process was to include accommodations for the owner’s upright piano so that it would not be pushed to an exterior wall and thereby in closer proximity to the elements and temperature fluctuations.

In keeping with the idea of sophisticated simplicity Aardema found a small sofa with a walnut base to complement the deep blue of the window seat cushions and the stained gray tones of the interior doors without downplaying the functionality of the room.

“When I design a room it’s to reflect the style of the people who live there now ” Aardema says. “If I can walk out of a house and have someone love everything I’ve done I’m happy with what I’ve done.”

Hung over a vintage upright piano is a surfing photograph from 1975 of the Banzai Pipeline in Oahu Hawaii. It’s a photograph by Dan Merkel of a famous surfer Wayne “Rabbit” Bartholomew.

“This house was one of my favorites 11 years ago and it still is ” she says. “So it was interesting for me to go back and do a full gutting on the place.”

The homeowners restructured the first-floor layout moving the master bedroom upstairs in part to be closer to the kids and in part to open up the first floor for entertaining. The new layout created an open-concept living area perfect for accommodating smaller parties.

Bringing into play a modern coastal vibe Patterson and the homeowners incorporated streamlined furniture and sleek finishes including exotic stonework in the fireplace.

Another hidden gem that she added into the layout was the concept of dark walnut woods in areas like the library wall long sofas in charcoal leather and larger coffee tables for accessibility. User-friendly furnishings were important to the homeowners a fact Patterson understood as a mother herself.

“It was all very beautiful but durability was really important for a family with kids ” she says. “Our ideas were not conducive to a lot of clutter.”

Patterson commended the homeowners for their willingness to experiment from hanging grass cloth wallpaper to rearranging entire sections of the room.

“They were so willing to take risks from a design perspective ” she says. “They wanted me to think outside the box wanted me to be innovative and for someone in my line of work that is one of the most fun things about a big project.”

It is hard to pick just one thing from the living room that is my favorite but I would have to say the rug because that was the jumping-off point for the room and the color palette. It reminds me of their view on an overcast day. I love the soft colors of creams grays and blue-green tones.

Some concepts in design remain classics throughout the seasons. In that vein Tina Williamson recalls a master bedroom in a home on Figure Eight Island as one of her best projects since launching her interior design business Williamson Interiors in 1990.

The size of the room presented a challenge that required Williamson’s design skills to solve.

“The master bedroom was pretty large so we wanted to make sure it still felt warm by including certain pieces of art and coordinating the color scheme for effect ” she says. “It’s easier to make a large room intimate but it’s much more difficult to make a small room feel airy. Luckily we just had to make this one feel inviting and the owner’s preferences made this a simple case.”

Preferences veered to a more traditional coastal flair a casually elegant touch common among her beach houses on the island. Williamson says logical flow was the general theme for much of the house while the bedroom was meant to be a contemporary oasis.

“We started with the fabrics on the bed then around the windows wall color and art ” Williamson says. “People come with ideas at the beginning but sometimes you don’t have the nicest colors in the styles they like and you have to look around a bit for what will work.”

Williamson and the homeowner finally found what they were searching for in the form of a crisp palette centered on gray white and aqua hues. When coupled with the contemporary patterns atop classic choices in fabric the overall impression was that of a relaxing space. They rounded out the suite with Carrara marble counters in the bathroom and a strong enough wall color to bring out the white rattan mirrors making the space’s aura a complementary one.

“If the draperies are open you’re looking out over the channel ” Williamson says. “Inside and out it’s just blue blue blue.”

The pagoda fabric. It fits in with the color palette we chose the way it plays off the gray and greens in the house. It’s sophisticated and yet casual enough for a beach house.

Liz Carroll has learned the value of combining one-of-a-kind design features with functional layouts since leaving the banking business to form her company in 2008.

“Every project ends up being different ” she says. “Sure we do a lot of beach houses here but everyone wants something unique and they all end up being focused on livability more than anything else.”

Livability is key in a home she recently designed on the south end of Figure Eight Island particularly in the living room. The room’s most striking feature is the natural light provided by the addition of spacious windows at the top of the room and beside the fireplace. Combined with the brightness afforded by French doors the room was significantly opened up from its prior configuration.

“All of that light is my favorite thing about how this room turned out ” Carroll says. “You get the full view of the water and it really makes the space just bright and happy.”

The textured coastal atmosphere continues inside the living space. Carroll worked to emphasize the historical aspects of the room in darkened wood and blue-and-white accents in decoration and fabric.

An extended fireplace that supports two new windows and a one-of-a-kind mantle particularly showcases the goal to recapture pieces of the past.

“The fireplace has this clean oyster stone all around it and the mantle actually came from an old tree from the Cape Fear River ” Carroll says. “It’s hundreds of years old but once it was restored it made for a great addition to the room.”

My favorite thing in the room is the oyster stone we used for the fireplace surround. It is a 5 million-year-old fossilized oyster shell limestone that comes from Jordan. When I saw the stone for the first time I knew we had to use it in the house. It’s also the countertop for their outdoor bar.

Kitchens tend to be some of interior designer Gay Adair’s favorite projects and the one she loves the most is the one in her own Carolina Heights home.

“The light this time of year middle summer makes my own kitchen my very favorite room ” the owner of Gay Adair Design says. “This house built in 1910 had been condemned but I was a sucker for the way natural light played through it so I bought it. It took four offers being rejected for me to finally own this house. But after the very first time I walked through it I had designed this kitchen in my head and days later on paper and never changed a thing throughout the remodel.”

The renovation took 11 months. Once the rotting floor joists were replaced and the lack of openness resolved by the addition of windows — after having obtained approval from the preservation board to do so given the age of the home — Adair was able to focus on more personal touches.

From selecting Swedish handprinted wallpaper to installing antiquated lighting fixtures that revealed a need for some rewiring Adair worked to emphasize a natural sense of beauty in the room a practice she has cultivated with many soulful interpretations for her clients.

The cabinets include painted vintage pieces that had to be crafted to exacting measurements and style to match. Italian tie-dye fabric adorns the freezer and dishwasher which serve as complementary offsets for a poster of Adair’s mother at the age of 19 proudly affixed to her refrigerator.

“My mother died at 94 ” she says. “I smile almost every time I see her smiling face.”

Adair boasts that she has seated up to 60 guests for dinner though it’s a compact space. The white-washed floorboards make for a worthy dance floor on occasion she adds. Combined with a new stereo system the kitchen transforms easily from a relaxing nook to an entertainment center of the house in no time at all.

When I walked into the kitchen and saw the wallpaper up for the first time I couldn’t believe it. It looked just like the wallpaper in Peter Cottontail’s house in a book I had when I was 5. Only Mrs. Cottontail’s wallpaper wasn’t trees it was cabbages! I was mesmerized by that wallpaper; those pages in that book were like a secret special place for me � and it only took me 50-plus years to express it!