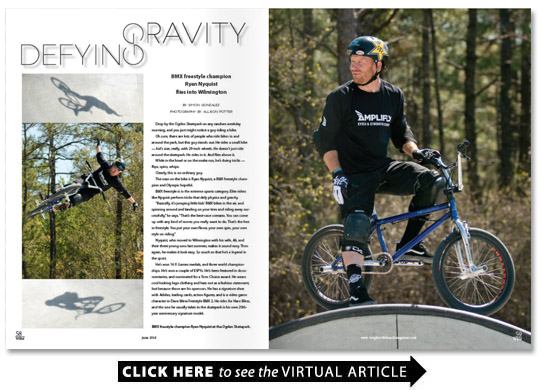 Drop by the Ogden Skatepark on any random weekday morning and you just might notice a guy riding a bike.

Oh sure there are lots of people who ride bikes in and around the park but this guy stands out. He rides a small bike — kid’s size really with 20-inch wheels. He doesn’t just ride around the skatepark. He rides in it. And flies above it.

While in the bowl or on the snake run he’s doing tricks — flips spins whips.

Clearly this is no ordinary guy.

The man on the bike is Ryan Nyquist a BMX freestyle champion and Olympic hopeful.

BMX freestyle is in the extreme sports category. Elite riders like Nyquist perform tricks that defy physics and gravity.

“Basically it’s jumping little kids’ BMX bikes in the air and spinning around and landing on your tires and riding away successfully ” he says. “That’s the best-case scenario. You can come up with any kind of moves you really want to do. That’s the free in freestyle. You put your own flavor your own spin your own style on riding.”

Nyquist who moved to Wilmington with his wife Ali and their three young sons last summer makes it sound easy. Then again he makes it look easy. So much so that he’s a legend in the sport.

He’s won 16 X Games medals and three world championships. He’s won a couple of ESPYs. He’s been featured in documentaries and nominated for a Teen Choice award. He wears cool-looking logo clothing and hats not as a fashion statement but because those are his sponsors. He has a signature shoe with Adidas trading cards action figures and is a video game character in Dave Mirra Freestyle BMX 2. He rides for Haro Bikes and the one he usually takes to the skatepark is his own 20th-year anniversary signature model.

Ali had no idea he was a big deal when they started dating. She was a student at East Carolina University. He was a pro rider on the BMX circuit when Greenville was home to some of the best freestyle riders in the world.

“He had told me he rode bikes but I thought he was just another college student ” Ali says. “The thing about Ryan he’s never one to tell you about his accolades. It never really came up. The funny part was when he dropped me off at my apartment as soon as he left there was knock knock knock on the door. I lived next to a group of guys. They were like ‘Ali did Ryan Nyquist just drop you off?’ I was like ‘Oh you have a class together?’ They said ‘Ali he’s on ESPN like every other day.'”

Further confirmation came when Ali traveled with Ryan to an X Games competition in Philadelphia.

“We got back to his car and he had love notes from all these women ” she says. “I remember thinking ‘This is really funny.’ But then it goes away because he’s such an average Joe. He drives a 2001 Dodge Dakota pickup that has a different color tailgate. It’s just this beater truck and it’s his favorite thing. I love that about him.”

After they were married the couple stayed in Greenville where Ryan had built and operated an indoor facility called The Unit. They moved to Santa Cruz California when his mother became ill but after nine years the Nyquists were ready to return to North Carolina.

Ryan thought a return to Greenville would be ideal but Ali had a different plan.

“After living in Santa Cruz and being at the beach and enjoying marine life we didn’t want to give that up ” she says. “Wilmington seemed like a great spot.”

They chose it because it’s on the coast it’s a great place to raise their family and the health-conscious vibe was right to implement Ali’s dream of opening a boutique fitness studio.

She doesn’t have her husband’s awards and accolades but Ali is also an athlete. She’s an accomplished distance runner and triathlete. She’s even completed an Ironman-distance triathlon — a 2.4-mile swim a 112-mile bicycle ride and a 26.2 mile run.

“I like to push myself and try things that are going to challenge me ” she says. “I got into triathlons and that turned into half Ironman distance and the full Ironman distance. After training for so long I wanted to get into coaching. I enjoy helping somebody else cross the finish line.”

Her studio’s primary focus will be on rhythm-based indoor cycling fitness classes set to a rock-and-roll beat.

“She made me get certified to be an instructor so I’ll be in there teaching classes ” Ryan says.

His primary focus though is pursuing his Olympic dream. BMX freestyle will debut at the Tokyo Games in 2020.

At age 39 Ryan is an elder statesman in a youth-oriented sport. Older athletes can thrive in extreme sports — 34-year-old Kelly Clark placed fourth in the women’s halfpipe snowboarding event and 31-year-old Shawn White won gold in the men’s event at the Winter Olympics in February. But making the United States team will be extremely difficult especially since the field in Tokyo will be restricted to nine riders from around the world.

“I’m not going to lie. It’s a long shot ” he says. “The U.S. is one of the biggest talent pools in the world for BMX freestyle. I’ve got to be the best out of all those guys. And some of those guys are young enough to be my kids. But I still feel I have what it takes to be on a podium in a contest. If I can be in the top three at an event I have a chance of making the Olympics.”

It will take some serious training which means he’ll continue to draw attention at the skatepark when he’s doing tricks like barspins backflips and 360 and 720 spins.

“Some guys are starting to realize that I show up ” he says. “They may not know my name but they know me as the guy who goes high.”

If they don’t know his name or his accolades or his Olympic dreams that’s OK. As Ali says he’s just a regular Joe.

“It’s cool to get noticed sometimes but I’d much rather have someone come up and want to ride with me and join the fun than have everyone stop what they’re doing and take a camera out ” he says. “What I enjoy the most is meeting people riding with people pushing people beyond their comfort level. Riding in the skatepark there’s a lot of really cool lines that a lot of people didn’t see or maybe were too scared to try. I enjoy riding with people that want to progress. Not only does it get them excited and stoked and happy about it but it gets me excited.”