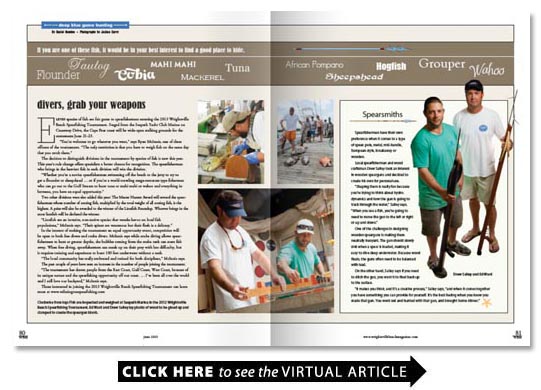 If you are one of these fish it would be in your best interest to find a good place to hide.

Eleven species of fish are fair game to spearfishermen entering the 2013 Wrightsville Beach Spearfishing Tournament. Staged from the Seapath Yacht Club Marina on Causeway Drive the Cape Fear coast will be wide-open stalking grounds for the contestants June 21-23.

Youre welcome to go wherever you want says Ryan McInnis one of three officers of the tournament. The only restriction is that you have to weigh fish on the same day that you catch them.

The decision to distinguish divisions in the tournament by species of fish is new this year. This years rule change offers specialists a better chance for recognition. The spearfisherman who brings in the heaviest fish in each division will win the division.

Whether youre a novice spearfisherman swimming off the beach to the jetty to try to get a flounder or sheepshead or if youre a world-traveling mega-resources type fisherman who can go out to the Gulf Stream to hunt tuna or mahi mahi or wahoo and everything in between you have an equal opportunity.

Two other divisions were also added this year: The Master Hunter Award will reward the spearfisherman whose number of scoring fish multiplied by the total weight of all scoring fish is the highest. A prize will also be awarded to the winner of the Lionfish Roundup. Whoever brings in the most lionfish will be declared the winner.

Lionfish are an invasive non-native species that wreaks havoc on local fish populations McInnis says. Their spines are venomous but their flesh is a delicacy.

In the interest of making the tournament an equal opportunity event competition will be open to both free divers and scuba divers. McInnis says while scuba diving allows spearfishermen to hunt at greater depths the bubbles coming from the scuba tank can scare fish away. When free diving spearfishermen can sneak up on their prey with less difficulty but it requires training and experience to hunt 100 feet underwater without a tank.

The local community has really embraced and trained for both disciplines McInnis says.

The past couple of years have seen an increase in the number of people joining the tournament.

The tournament has drawn people from the East Coast Gulf Coast West Coast because of its unique nature and the spearfishing opportunity off our coast. Ive been all over the world and I still love our backyard McInnis says.

Those interested in joining the 2013 Wrightsville Beach Spearfishing Tournament can learn more at www.wilmingtonspearfishing.com

Spearfishermen have their own preference when it comes to a type of spear: pole metal mid-handle European-style breakaway or wooden.

Local spearfisherman and wood craftsman Drew Salley took an interest in wooden spearguns and decided to create his own for personal use.

Shaping them is really fun because youre trying to think about hydrodynamics and how the gun is going to track through the water Salley says. When you see a fish youre going to need to move the gun to the left or right or up and down.

One of the challenges in designing wooden spearguns is making them neutrally buoyant. The gun should slowly sink when a spear is loaded making it easy to dive deep underwater. Because wood floats the guns often need to be balanced with lead.

On the other hand Salley says if you need to ditch the gun you want it to float back up to the surface.

It makes you think and its a creative process Salley says and when it comes together you have something you can provide for yourself. Its the best feeling when you know you made that gun. You went out and hunted with that gun and brought home dinner.