Decluttering for the New Year 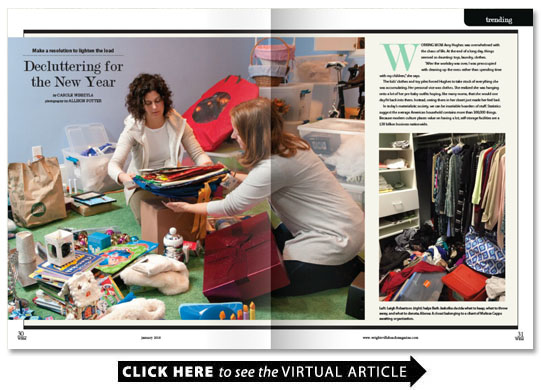 Working mom Amy Hughes was overwhelmed with the chaos of life. At the end of a long day things seemed so daunting: toys laundry clothes.

“After the workday was over I was preoccupied with cleaning up the mess rather than spending time with my children ” she says.

The kids’ clothes and toy piles forced Hughes to take stock of everything she was accumulating. Her personal vice was clothes. She realized she was hanging onto a lot of her pre-baby outfits hoping like many moms that she would one day fit back into them. Instead seeing them in her closet just made her feel bad.

In today’s materialistic society we can be insatiable hoarders of stuff. Statistics suggest the average American household contains more than 300 000 things. Because modern culture places value on having a lot self-storage facilities are a $38 billion business nationwide.

Hughes didn’t need a statistic to know her stuff had become a burden. Her solution was to reach out to professional organizer Leigh Robertson who studied the methods of Marie Kondo author of “The Life-Changing Magic of Tidying Up ” and is one of only 50 Kondo-certified consultants outside Japan.

Robertson became motivated to declutter her own life and give more time back to her family after reading Kondo’s book about a year ago. Despite being a very organized person the former teacher and now program director of the Lower Cape Fear Branch of the Diaper Bank of North Carolina had collected a lot of paperwork over the years — books from college papers and old files from teaching. Her large home was filled with all kinds of stuff and she felt it was having a negative effect on her family.

“The clutter was weighing on my mind and I was astonished at the amount of items we owned that we didn’t use ” she says.

She started with clearing out her closet. After five months her husband said “Wow! Your closet looks really nice ” and proceeded to do his. They next talked to their children about letting go of some of their belongings.

Robertson found this tough because she liked certain items yet the kids didn’t feel the same attachment. She was surprised by how each child saw the value of creating space and finding things more easily.

Hughes also had trouble when she went through her children’s clothes. She found herself holding onto items wanting to relive moments from the kids’ younger days. Robertson suggested she donate the items sharing that by giving them away she was helping others.

Donating items to a charity or giving them away is a win-win allowing others to benefit from your surplus. Plus the value of items donated to charitable shops like Vintage Values or the Church of the Servant’s Bargain Box with benefits going to the Good Shepherd Center are tax-deductible. And that’s not the only way to dispose of excess possessions. Consignment stores will sell select items for a percentage of the proceeds (which can be up to 50 percent). Posting items on an online resale group and holding a yard sale are other ways.

While selling excess stuff can be a way to recoup some of the original cost Robertson says people often get too hung up on the financial value of things. Just because they paid a lot of money for something doesn’t mean it is worth much in the second-hand market.

A tendency to overvalue or an inability to let go of things is all part of a consumer culture says professional organizer Melissa Capps.

Capps loves going into the chaos of too much stuff and creating a strategy to restore order; she says it’s very therapeutic. The strategy can be something seemingly simple. For Cynthia Boulay mom of a 10-year-old boy and twin 5-year-old girls it was to start small and accomplish one little thing.

Boulay says life became chaotic after the twins’ arrival. But it wasn’t until she moved the girls into their own room that she became overwhelmed with their clothes. She felt instant relief after Capps outlined the process.

“If I had to do it alone it would have taken me hours ” she says.

Capps helped her implement a storage system to keep what she needed and to overcome emotional attachments to things that needed to go. After the initial downsizing Boulay keeps from accumulating more things with a simple but oh-so-effective rule: one-in one-out.

Robertson helps her clients declutter by suggesting the “20-20” rule which helps them see the true value of things based on living in a world packed with a variety of stores that sell low-priced goods: If you can replace an item in 20 minutes for less than $20 get rid of it.

But for some reason — maybe a throwback from the generation that grew up in the post-Depression era when possessions were few — letting go of things can be difficult.

Robertson says there’s nothing wrong with that. Possessions that have a special meaning or trigger cherished memories contribute to general wellbeing. But she employs a method to help people evaluate what is most important.

She suggests choosing a cherished item from the area being purged and putting it somewhere visible. From there she says to compare every item with the special item and ask the question “Does this item make me feel as good as that special item?” Before long the “sell” and “donate” piles will be much bigger than the “keep” pile.

The work isn’t over once those decisions have been made and the sell and donate items are out of the house. It’s important to then switch to “organize” mode and put things where they are easy to find.

“If you are not intentional about organizing your stuff you won’t be able to find things and will resort to buying more ” Capps says.

Hughes remembers learning how to make decisions about what she wanted to be surrounded with. She wanted to change the pattern in her life so she could spend more time with family.

“Decluttering is a process of learning about yourself ” she says. “If you declutter you learn about the patterns in your life.”

Robertson says it’s important not only to commit to the process of letting go but also to understand that it’s going to take time. She says that the order in which the process is carried out matters and suggests starting with the easy stuff and leaving sentimental items until last.

Capps agrees and says making the decision to start is the hardest part — because there is never a perfect time. Her advice: “Start small … and just start!”

When one room or one area is decluttered she says it’s a good time to pause for a celebration and to let that success fuel the next goal.