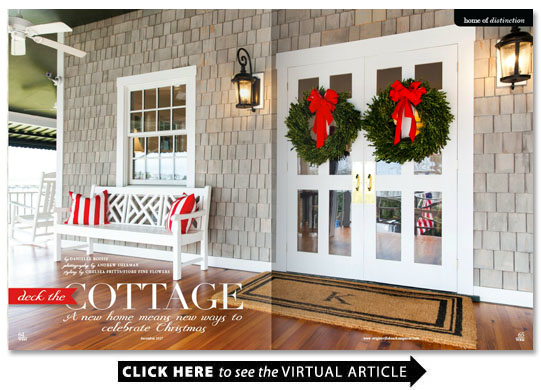 Christmas tradition for the King family once meant decorating one large tall tree in the house. Now a new house calls for new traditions — two smaller trees fit under the lower ceilings of their cozy beach cottage on Wrightsville Beach.

The first Christmas tree adorned with MacKenzie-Childs collectible ornaments greets guests at the front door. The second tree overlooks Banks Channel. During years of walks on Wrightsville and Atlantic beaches the family found the collection of sand dollars that now decorates the evergreen. They bleached each one by hand and strung it with red ribbon to hang on the tree.

“From the front door I wanted to be able to see the fireplaces the water and our family’s silver on display ” says homeowner Bill King.

Memories — nostalgic family photos a personalized selection of artwork and family heirlooms — are shared on walls and between spaces. The snowmen sitting on the fireplace mantel in the living room were gifts given to Bill’s parents.

“We use things that have special meaning and incorporate them somewhere ” says Karen Bill’s wife.

Tradition is important to the family. It’s seen in their use of Christmas d�cor and in the very home itself.

The beach cottage was originally built in 1941 by a man in the lumber business. Gail Farthing bought the home in 1970 and sold it to John Drewery her son-in-law 15 years later. The Andersons purchased the house in 1987 and renovated the back in 1998.

The Kings purchased the home in October 2015 and hired Mark Schmidt of Schmidt Custom Builders to complete a thorough renovation. Work began in January of 2016 and was completed at the end of July.

“Everything has a story ” Bill says. “I love how we kept the character and made a really good house even better.”

The history of the house was important. So much so that the Kings were willing to put up with some of the quirks of a 70-something-year-old cottage.

When Schmidt called Bill and Karen to tell them the original pine floors were not level the Kings wanted to leave them just as they were. Keeping the character of this 1941 beach cottage was important to the new homeowners.

“Mark really knew what we wanted. He got our idea and didn’t push for leveling the floors or plumbing the doors ” Bill says.

Although it needed work the World War II-era cottage overlooking the channel was just what the Kings were looking for when they were searching for a family home. The five-bedroom four-and-one-half bath home was plenty big enough for Bill and Karen and their four children.

“After looking at the house several times we saw the potential. We wanted this to feel like a beach cottage but also feel like a home ” Karen says.

The Kings kept the original cedar shakes on the exterior and the original pine shiplap walls on the interior. They had the interior walls painted white to brighten the space and act as a backdrop for their heirloom antiques and sentimental collection of artwork.

“I felt in order to not feel dark with the antiques I wanted white walls to balance ” Karen says.

Bill grew up learning about antiques. He inherited American-made antiques that have been passed down for generations.

“My parents loved antiques and history ” he says. “The chest in the sitting room has been in my father’s family since the 1700s.”

A handmade grandfather clock from the 1830s can also be seen from the front door beside the hutch that displays their family’s silver.

Some bathroom tile remains in addition to the original glass door handles.

The biggest change was opening up the interior — infusing daylight by adding floor-to-ceiling windows taking down walls and opening up the archways that lead to each room.

The kitchen and living space now has a wall of floor-to-ceiling windows that capture the views giving the appearance that the house is standing on water.

The now-white pine shiplap walls are adorned with the Kings’ special artwork they collected from their travels to Alaska Maine the Tetons and Colorado.

The family members are avid hikers and skiers always going to the top and bottom of the mountains as a family.

“We placed the art first. We also opened up the stairwell so we could display our George painting ” Karen says.

The painting by George Pocheptsov is a family favorite. The 25-year-old artist completed the piece that’s displayed above the stairwell when he was only 17. Karen and the kids also surprised Bill for Father’s Day with a commissioned Pocheptsov piece — a painting of the four children that hangs in the master bedroom.

At the end of the upstairs hall the master bedroom with uneven pine floors touches the master bathroom — an addition to the rear of the home.

From the water the Kings’ cottage still looks the same as it did when it was built years ago. Schmidt disguised the renovation of new windows an addition and an outdoor shower.

“I really enjoy renovation of older homes building with a challenge updating code and matching what is existing ” Schmidt says. “I enjoyed working on a period house. It’s cool to come in when the project is done and see the same character that was originally there.”

When the Kings aren’t out enjoying their evenings on the boat they are entertaining.

“Our friends stop by after walking the loop or by car bike foot paddleboard and boat ” Bill says.

Summer at Wrightsville Beach is special with evenings on the front porch which acts as another living area. But winter evenings are wonderful too with family time spent by the fire.

It will be even more special as the Kings prepare to spend their second Christmas at the Wrightsville Beach cottage surrounded by heirloom decor and traditional family ornaments on their two trees.