A love of sailing — and adventure — brings explorers to Wrightsville Beach 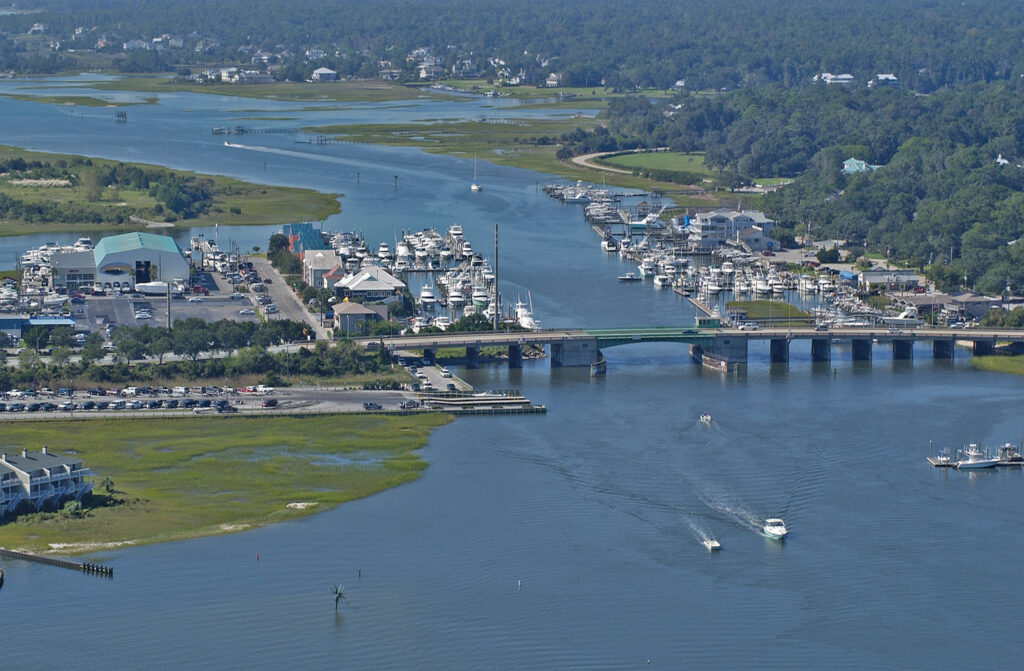 These temporary residents come through to take shelter, make repairs, enjoy the area, and provision for the next leg of their journey.

Most of these voyagers are chasing the roots of travel; rather than the expediency of a flight or a drive, they use the wind to escape the mundane and the solid ground to enter a world of exploration. As American author John A. Shedd states, “A ship at harbor is safe, but that is not what ships are built for.”

Zephyr’s Australian owners, Nat and James,  have been sailing four years straight. They have two new additions aboard: Kirra and Flint, 3-month-old puppies they are training to be boat dogs. Their destination is Burleigh Heads, Queensland, Australia. They intended to sail for a year and return to their jobs, but they enjoyed their travels so much, one year turned into four as they have sailed the world.

They spent the summer in Annapolis and, after stopping in Wrightsville Beach, were headed to the Panama Canal on the journey to Australia. They plan to stop at several islands on the way, including in French Polynesia, to provision.

Robert is sailing his Island Packet 380 from Hampstead, N.C. to Port Aransas, Texas. He took it up to New Bern to work on the electronics for a month and joined up with four buddy boats that are traveling together to Florida. The five boat owners planned a potluck Thanksgiving, and he says they are becoming like family on the water. Next, he is  heading home to Texas to redo the engine, update the boat, and make it more suitable for offshore sailing.

A fun adventure Robert shared is walking with another sailor from the Banks Channel dingy dock to Walmart on Sigmond Road to stock up for Thanksgiving. Don’t worry — they took a rideshare back with their provisions.

Sandra and Dave, along with their schnoodle named Sailor, are making their way to the Bahamas. They left their hailing port, Midland Ontario, Canada on August 1. They spent 10 years planning for this trip, a lifelong dream.

They transited 75 locks to get to the ocean; Lake Huron alone has 44 locks, and Lake Erie is close behind with 34. Traveling through Lake Huron, Lake Erie, Lake Ontario, the St. Lawrence River, Lake Champlain and the Hudson River finally brought them out to the ocean once they passed New York City.

Second Wind’s top sail was from Liberty Landing in North Jersey to Henlopen, Delaware. For 20 hours Sandra and Dave didn’t touch the sails.

The trip contained several firsts, including Second Wind’s first time in saltwater. Wrightsville Beach was also Sandra and Dave’s first time on sand during the trip.

Karen and Steve are cruisers who have been living and sailing on Angelfish for a year and a half.

They spent 51 hours straight sailing offshore from Chesapeake Bay to Wrightsville Beach. Their hailing port is Portsmouth, Rhode Island, they are heading to the Bahamas.

They planned to go to Fernandina Beach, Florida, for Thanksgiving, and St. Augustine for Christmas.

Aboard Agape, hailing port Milford, Connecticut, owners Danny and Rishi travel with a green-cheeked parakeet named Elu. They say they are “making their way home” with no destination.

They left behind their mushroom farm to pursue a dream they had for 15 years. Danny spent 11 years surfing in Mexico, and sailing is his way back to the ocean. He is a carpenter and spent a year building a new hull.

Danny and Rishi were new to sailing when they boarded Agape. They spent the summer of 2022 sailing the Rhode Island Sound to prepare for their trip, jibbing and tacking in 40-50-knot winds, and learning from the “school of hard knocks.”

They sailed from New York to Norfolk through the night and had to heave to in the ocean due to high winds. A pod of dolphins welcomed them into Wrightsville, which they described as “the most beautiful place we’ve been.”

Danny and Rishi say they are enjoying the history of each place they travel, seeing the Intracoastal Waterway, and traveling in a sustainable way.

Heather and Mark have been sailing their Leopard 44 catamaran Sea Lynx, hailing port Anchorage, Alaska, for 12 of the past 15 months.  They say they are “chasing the 70s,” the comfortable 70-degree weather, as the seasons change.

They began in Florida, spent last winter in the Bahamas, then sailed the Gulf Stream to Chesapeake Bay in a five-day trip in May. Sea Lynx spent a month in Maryland and sailed as far north as Maine this summer.

Heather and Mark say highlights included watching Fourth of July fireworks at Ellis Island from their boat, seeing whales in the Cape Cod Canal, and having a reunion with four of their buddy boats they met in the Bahamas in Hingham, Massachusetts.

They are now making their way to Hilton Head Island, South Carolina, to meet up with a buddy boat before sailing back to the Bahamas for the winter.

Kirk, Judy and their friend Dave are heading to the San Blas Islands in Panama. They sailed two days straight offshore from Chesapeake Bay to anchor in Banks Channel.

One standout from their trip so far is, while sailing offshore from the Chesapeake, a shark jumped six feet above the water’s surface in front of the bow. They say they are making this trip because they love to sail.

While their destinations vary as they head out, there are some commonalities among these sailors and their journeys — seeking adventure, warm weather and pursuing the love of sailing, to name a few. Many have built a community and fostered new friendships on the water. Most agree of their enjoyment of Wrightsville Beach, an appreciation of the mooring, and how beautiful the water and wildlife are.

“Women, Wind and Plastic” published in the August 2022 issue of Wrightsville Beach Magazine.

When they left Wrightsville Beach in the summer of 2022, “Women and the Wind” successfully sailed to the Azores, then the Canary Islands, then transported 16 restored surfboards (donated by friends) to a group of surf-stoked kids in Cape Verde. Kiana has just recrossed the Atlantic solo reaching Ilhabela, Brazil on December 19, 2022. She is expected back in North Carolina in the summer of 2023.