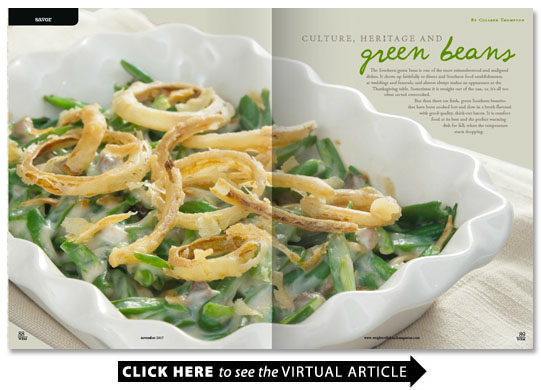 The Southern green bean is one of the most misunderstood and maligned dishes. It shows up faithfully at diners and Southern food establishments at weddings and funerals and almost always makes an appearance at the Thanksgiving table. Sometimes it is straight out of the can or it’s all too often served overcooked.

But then there are fresh green Southern beauties that have been cooked low and slow in a broth flavored with good-quality thick-cut bacon. It is comfort food at its best and the perfect warming dish for fall when the temperature starts dropping. food is as much about people as it is the ingredients.

A beloved recipe is often a compendium of stories which have been woven into the lives of those who cooked them. Recipes created by those who lived long before us in a different era are lenses into the past. To interpret them we have to respect the traditions and history that fostered them.

That’s especially true for Southern food. To quote Georgia-born author John Egerton “For as long as there has been a South and people who think of themselves as Southerners food has been central to the region’s image its personality and its character.”

True Southerners know what potlikker is — the delicious vitamin-rich broth that’s left over from boiling beans and greens. It has its origins among slaves who had to feed their own families with the leftovers from their masters’ kitchens and tables.

Simmering vegetables in potlikker is a time-honored tradition in Southern kitchens reflecting both the bounty of the plantations and the scarcity of the slave diet. Regardless of the origins it’s a beloved dish that has held an important place on the table since antebellum days.

Green beans simmered in pork fat is another perennial favorite with roots in the practical past. The practice started on hog farms. The salty rich flavor of the pork made the beans flavorful and the fat made them substantial. Green beans simmered in a pot with water and pork was the main dish not a side accompaniment like it is today. The leftover parts of the pig — hog jowl fatback bacon — were combined with the beans to add calories and create the feeling of satiety which increased the amount of energy that could be expended in fields or factories until the next meal.

The beans were simmered for a long time because the pods contain lignin a substance also found in wood hemp and linen which make the bean tough and difficult to digest unless fully cooked.

Early 19th-century cookbooks from the likes of Mary Randolph and Lettice Bryan published recipes calling for different cooking times but by the 1870s it was nearly universal for Southern cookbooks to call for simmering beans for around three hours with salt pork.

“Green beans” is the generic term for a dizzying number of different legumes. There are more than 130 varieties of Phaseolus vulgaris literally translated as “common bean.”

The green beans of the South are mostly string snap or pole beans. String are so called because of the tough fibrous strings along the pods that needed to be removed back in the day before most seed companies successfully bred the strings away. Snap is associated with the freshness when the stem end is snapped off and the beans are halved or quartered lengthwise before cooking. Pole beans grow on a vine that has to be trained onto a pole.

In a fast-moving modern-day factory farming culture pole beans belong to an old farming craft. They take up acres of space for the trellises that have to be set up and then they have to be handpicked again and again. The reason pole beans manage to hold out despite the odds in commercial bean culture is simple: taste and texture.

String and snap beans are non-climbing easy to harvest and cheap to produce. As good as they are nobody has come up with a bush bean variety that has all the good eating qualities of a pole bean. Virtually everyone who has grown both — including bush bean producers — will say pole beans are their favorites for flavor. Pole beans can be wide and flat or round and plump and they come in shades of green yellow and purple.

When you know your bean you

know your cooking method. For culinary purposes beans can be divided into bush varieties pole beans half runners and dry beans. The glamorous and urbane-sounding haricot verts are French filet beans (in England they are called fine beans) and are thinner crisper stringless and harvested when five to seven inches long and one-quarter inch thick.

It’s become fashionable to serve green beans barely cooked so they still have some crunch and retain their bright green color. Simmering haricots will turn them to mush. Admittedly the color of Southern-style green beans isn’t nearly as appealing as that of fresh green beans.

The key to great green beans is slow simmering not boiling with only a very slight bubble on them in a little broth for about 45 minutes — down from the longer cooking times of the late 1800s because the tough strings have been bred away. Keeping the delicious potlikker and pouring it over the beans at the end is an old-fashioned and delicious way to enjoy fresh green beans served truly Southern style.

In a Dutch oven or large heavy-bottomed pot over medium heat fry the bacon until crisp. Transfer bacon with a slotted spoon to paper towels to cool. Leave bacon fat in pan.

Add diced onion and garlic to the bacon fat. Cook over medium heat for 2-3 minutes or until onion softens. Add the green beans and cook for a minute.

Add chicken stock and freshly ground black pepper. Stir together. Lower the heat to a simmer cover and cook for 45 minutes.

Remove the beans from the heat season with salt and mix in the butter.

Crumble the cooked bacon and sprinkle over top. Serve warm.