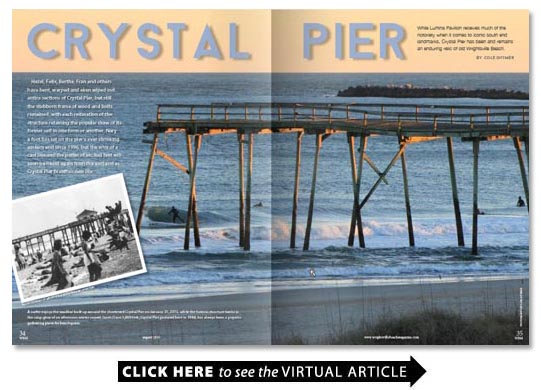 While Lumina Pavilion receives much of the notoriety when it comes to iconic south end landmarks Crystal Pier has been and remains an enduring relic of old Wrightsville Beach. Hazel Felix Bertha Fran and others have bent warped and even wiped out entire sections of Crystal Pier but still the stubborn frame of wood and bolts remained with each reiteration of the structure retaining the popular draw of its former self in one form or another. Nary a foot has set on the piers ever shrinking eastern end since 1996 but the whir of a cast line and the patter of excited feet will soon be heard again from the east end as Crystal Pier breathes new life.

Mira Mar was the name bestowed upon the original pier by Floyd Cox the builder who completed the structure in 1939. Cox built the pier over the remains of the famed Confederate blockade-runner Fanny and Jenny whose hull and machinery were visible during low tide at the time.

Wrightsville Beach resident historian Bill Creasy says he remembers a portion of the Fanny and Jennys hull had to be removed with dynamite during construction of the Mira Mar.

Building over the blockade-runner also proved to be an effective draw for area fishermen who were anxious to see if an artificial reef had built up around the wreckage.

Back then it was a different clientele of people down here than there is now Creasy says. Most of them were fishermen and of course when they heard a new pier might be built they were anxious to get out there and see if the fishing was any better there; and it was.

Although the trolley line ran as far south as the pier Creasy whose family once lived on Charlotte Street says the north-enders like himself did not venture down to the Mira Mar frequently because it was much easier to walk to Johnnie Mercers Pier built in 1937 as the Atlantic View Fishing Pier. However for young boys growing up on the south end like Ed Dalton the Mira Mar by then renamed the Crystal Pier was a world all to itself.

Dalton made the trip down each summer from Asheboro with his parents and siblings beginning in 1957 with Crystal Pier on the brain and the coming catches of bluefish spots sharks sheepshead tarpons and king mackerels.

We were right around the corner and when I didnt have anything else to do or any place else to be I would go out to the pier Dalton says.

He reveled in the variety of different cultures found among the anglers lining the piers railings. Those weathered wooden railings carved with pole holders and names bring a fond memory for Dalton.

I probably spent much more time out on the pier actually sitting up on that rail he says. Youd hook your legs around it and sit out there for hours and hours just talking and fishing he says.

Another vivid memory for Dalton came on the day when Roanoke Virginia fisherman Bobby Kentrolis caught the North Carolina state record blue shark from the pier in 1961. It weighed in at 478 pounds. To date no one has caught a bigger blue.

They had to take a front-end loader to dig a hole on the beach to bury it Dalton says. You couldnt get away with that now could you?

The tradition of good food at Crystal Pier began when Mike Zezefellis a Greek immigrant who arrived to the United States in 1920 bought the pier from the Hutaff family in 1940.

In a Wilmington Star News article from July 24 1983 the then-retired Zezefellis is described by Kim McGuire as a round balding 5-foot-2-inch man who always had a smile for his customers. Speaking in broken English he welcomed regulars and tourists into his establishment and made them feel at home.

One of those regulars during the 1950s and 1960s was Linda Robinson whose family lived at the home across the street from Lumina Pavilion which was owned by her father and uncles. The home still stands at the northwest corner of Iula Street and South Lumina Avenue. Robinson describes the atmosphere of the Crystal Pier Restaurant as having nothing fancy about it.

Mother and I would go there for crab cakes when my dad would go to Lions Club meetings and those were on Tuesdays Robinson says. I would also go up there and get their hot dogs; they were out of this world.

Along with the food it was the man behind the counter Spiro Kefalas who both Robinson and Dalton remember most.

He came off the boat and they took him to the restaurant from Greece [around 1955] Robinson says. He didnt speak much English at all but he was a very charming sweet man. He took to American cooking really fast.

After a tour in the Peace Corps which took her through Greece on the way back to Wrightsville Beach in 1969 Robinson remembers the first time she tried authentic Greek cuisine.

When I got home I went up to the pier to see Spiro and I said to him Why dont you serve these fabulous Greek foods I ate while I was there? she says. And he said Oh Americans wont eat those. He never did he kept serving those hot dogs and crab cakes.

While Robinson enjoyed Kefalas hot dogs for Dalton it was another bit of classic American fare that fueled many long hours spent watching his line on the pier railing.

I got a little bit older was in high school and ate a lot of his hamburger steaks which had nothing to do with seafood Dalton laughs. Spiro would take care of me.

Spiro Kefalas remained behind the lunch counter in 1974 when Zezefellis sold the restaurant and pier to George and Nick Fokakis Zezefellis cousins.

In a Wilmington Star News article from June 14 1976 Fokakis and Kafalas seemed to have learned from their predecessor by the way they greeted nearly everyone in the small but constant stream of patrons.

Watching Fokakis take an order wipe sweat from his brow ring up an earlier order and push his glasses back up on the bridge of his nose as a bikini-clad young lady walks in you can tell the lunch hour is the most hectic wrote author Charles Sneed. In response to the question of whether he ever grew tired of looking at the ladies bathing suits Fokakis admitted Im single I get tired. Spiro hes married. He doesnt get tired.

The familiar lunch counter atmosphere remained on the first floor when the Fokakises tore down the building and built the three-story replacement that stands today. Six years later the brothers would sell the building and pier to Monica Watson who changed the eaterys name to the Oceanic Restaurant.

With the new building and new identity came more changes. Gone was the ramshackle pier house and lunch counter Robinson and Dalton remember where it was not uncommon to see prize catches of the day hung proudly in the corner or feel the rush of the incoming tide through the widely-spaced plank flooring. However the new business model allowed the pier to remain albeit slowly deteriorating with each new pulse of strong surf and wind.

In 2011 the continued weakening of the pier stirred the need for action. Strong waves generated by Hurricane Isaac in late August 2012 forced the issue when a piling and cross bracing beams were ripped from the structure. Soon Watson contracted Wilmington North Carolina architect Frank Smith of Smith 2 Architecture and Design to design a complete renovation after Smith and the structural engineers at Andrew Consulting Engineers discovered a small repair was not an option.

The pier renovation funded by LM Restaurants parent company of the Oceanic Restaurant was required by the North Carolina Division of Coastal Management to re-open the pier for public fishing.

While the new piers length will only be almost half of the original 1 000-foot Mira Mar pier Smith says the renovation will at least bring fishing back.

It was an exercise in reestablishing the public access to the water reestablishing the fishing pier and making it as attractive safe and weatherproof as possible Smith says. I think the end result is going to be pretty nice and seems to be receiving some good reviews.

Improvements to the structural design of the pier include additional side cross bracing beams and Smith says each pile was driven 30 feet into the ground. In contrast some of the old piles removed during the renovation were only 5 feet deep he says.

No matter how deeply the piles are anchored Crystal Pier has entrenched itself in the fabric of Wrightsville Beach history and the lives of those who have grown up with it.

While he wont be hooking his legs around the pier railing at the new Crystal or ordering any hamburger steaks at the Oceanic Ed Dalton says he may return to wet a line.

Id probably go out for old times sake Dalton says. I have lived all over the country but every time I go back to the beach I would always walk down to Crystal Pier just to make sure the ocean was still there.