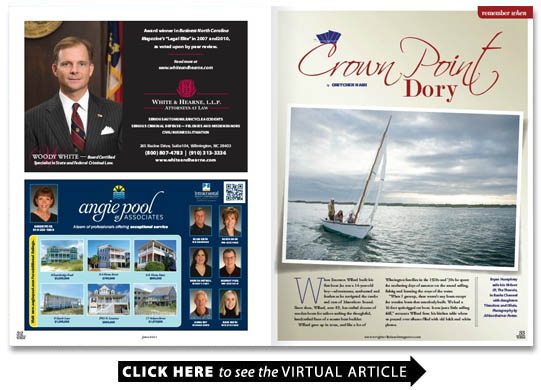 When Emerson Willard built his first boat he was a 14-year-old boyadventurous sunburned and fearless as he navigated the creeks and cuts of Masonboro Sound. Since then Willard now 89 has crafted dozens of wooden boats for sailors seeking the thoughtful handcrafted lines of a master boat builder.

Willard grew up in town and like a lot of Wilmington families in the 1920s and 30s he spent the sweltering days of summer on the sound sailing fishing and learning the ways of the water.

“When I grew up there werent any boats except the wooden boats that somebody built. We had a 16-foot sprit-rigged cat boat. It was just a little sailing skiff ” recounts Willard from his kitchen table where we poured over albums filled with old black and white photos.

The Willard property on Masonboro Sound has been in the family for generations. And when young Willard married Elisabeth they moved into the summer house on the sound to start the next generation of sailors. The property known as Crown Point is located in a shady tangle of weathered live oaks and scuppernong vines. After 60 years of marriage the Willards still appreciate waking up to water.

But beginnings even on the water arent easy. Willard and his brother Martin raised chickens after World War II in the big two-story barn behind the house. When that dissolved Willard went to work for a local trimaran builder. Eventually he realized that boats were not only in his blood they could be his profession.

“I was delighted ” Elisabeth says remembering the day he walked in the door and told her about his new boat-building idea. “If thats what he wanted to do I thought it was simply wonderful. We had two boys and it was kind of scary but I was really pleased because chickens are fine but that is not what he was thoroughly enjoying.”

They appropriately called the new venture Crown Point Marine and set up shop in the former chicken house in 1970 trading the cacophony of cackling chickens for the buzz of sanders and saws. A variety of beautiful wooden boats and skiffs emerged through the double barn doors of the boat shoprowing and sailing dories sailing skiffs and smaller boats down to 8 feet. But something about the elegantly shaped flare of the classic dory must have appealed to Willard because for the next 25 years he mostly measured and cut 22- 26- and 30-foot wooden ketch-rigged sailing dories. By 1995 when the Willards closed their boat-building shop Crown Point Marine had turned out 63 boats.

Dories are shallow draft flat-bottomed boats with bottom planks that run lengthwise from stem to stern. The gentle lines of the dory are aesthetically pleasing and its keel structure is unique and practical for the shallow waters of East Coast sounds.

John Gardner author of The Dory Book writes that dories are thought to have originated sometime after the invention of the water-powered sawmill toward the end of the medieval period. This marked a time when wide boards became plentiful and relatively cheap.

References to dories can be found as far back as the 1700s but it wasnt until the 1800s that dory-type boats were being favored by French cod fishermen in the Grand Banks. These small wooden boats were sent out from the mother ship Gardner explains to haul cod. Their thwartsor rowing seatswere removable so the small boats could be stacked onboard the ship. From there the dory spread to New England where it dominated the fishing industry.

Today the dory is primarily used as a pleasure boat instead of a working boat although the well-known Banks dory with her characteristic flared sides and flat bottom make her simple elegant lines stand out among other boats on the water.

Most modern-day wooden boat builders use existing patterns which makes the laying down of the lines as builders say much easier. But Willard crafted his boat lines by eye which is like playing the piano without sheet music. He relied on instinct and the experience of a lifetime reading the wind on the water to create boats that are both beautiful and functional.

Willards ketch-rigged dories are made of plywood and covered in fiberglass. First he built the sides. Then he built the flat bottom and attached it to the sides by patiently and expertly bending the wood. He bought and operated a small sawmill in his shop for cutting red cedar and walnut. For the masts he purchased rough-cut fir.

Built with a centerboard the larger Crown Point sailing dories came with sails purchased from Hong Kong while some of the smaller boats were rigged with locally-made sails. The boats have self-bailing cockpits and were built with outboard motor wells. They could either be sprit- or gaff-rigged and as Willard describes they have “a little bit of curve in the bow and stern. It has a narrow stern. A lot of flare in the sides. The sides go way out. Its a pretty loose definition. If you talk to different people youll get a different definition. It has a flat bottom. Has some rocker fore and aft but its flat crossways.”

Elisabeth says of those busy boat-building days “I dont know how he did it by himself. He just did.”

“No we always had somebody helping ” he corrects her. The general crew included Bill Hurst Doug Thompson and Emerson Willard Jr. local men who were willing to lend a hand as well as Cape Fear Technical College (now Cape Fear Community College) students who pitched in for extra credit.

And as he says to his wife Elisabeth “I always had you.”

Elisabeth helped with correspondence took phone calls and as she explains was the company gopher.

An old article from the National Fisherman dated February 1972 caught Willard at the right moment as he described his dories: “She is intended for a man who wants an inexpensive weekender or a limited cruising boat but one that is seaworthy and behaves like a sailboat. . . As with all dories she is tender until heeled. . . Because of the great amount of flare in her sides she is an unusually dry boat giving a smooth ride in rough water yet she is lively in a breeze and great fun to sail. Fitted with tholepins she rows without fuss with one or two persons at the oars.”

From Shop to water

Crown Point boats were sold and sailed up and down the East Coast from Florida to Maine but several of them ventured to the azure waters of the Bahamas and the Mediterranean. One of the boats designed with a folding mast so that it could be motored under bridges was taken by freighter to Europe.

“Its in the Mediterranean somewhere now as far as I know. It went over the Alps on a flatbed trailer ” Willard says still awed by the effort it must have taken. “They took it to Europe as deck cargo.”

The boats owner was so pleased with the way she handled that he invited the boat builder and his wife to Europe to take a turn in the canals. The Willards couldnt accept the invitation but the outpouring of camaraderie and kinship with their customers was not uncommon at all.

Curious neighbors local boaters friends and prospective boat buyers couldnt stay away from the smell of wood shavings and the hum of boat talk going on at the shop. One buyer regularly dropped anchor to have lunch with the Willards whenever he was in transit. Another buyer enjoyed the Willards Southern hospitality and lovely spot on the sound so much that he and his wife pitched a tent in the backyard and made themselves at home.

“That was OK for a several days ” Elisabeth says remembering the couple fondly “but after awhile we suggested a campground.”

The bigger boats were either put in at the Masonboro Boatyard or trailered from the boat shop by their new owners. But most of the Crown Point boats were launched from the Willards front yard into the sound and as usual these launchings drew a crowd of enthusiastic friends.

“Wed tow them as far as we could at low tide and then let them float off ” Willard says. “You have to not be in a hurry to do that.”

The Willards photo albums are full of boats and family and sailing trips. The pages are also stuffed with thank you notes and Christmas cards from dozens of clients turned friends some of whom still have their Crown Point boats on the water. Local architectural designer and builder Bryan Humphrey prizes the 18-foot Crown Point sailing dory that he bought from Willard in 1988. Humphrey keeps it on a trailer at the Carolina Yacht Club and sails it throughout the year around Wrightsville Beach Chesapeake Bay and to the annual Wooden Boat Show in Beaufort North Carolina. Humphrey smitten with the beauty and feel of a wooden boat on the water continues to add to the collection that Emerson Willard instigated.

“Weve got a whole barn full of boats ” Humphrey admits. “And hes the one who got it all started.”

Emerson Willard still keeps boats tucked away in the boat shop and theres always at least one sailboat available for his grown sons Martin and Emerson Jr. when they come to visit. Both men are consummate sailors and Martin who lives in Wilmington competed in the Laser Nationals in Florida last winter. One of Emerson Willards 30-foot sailing dories the OHNO III rests proudly in the old boat shop like a grand old dame with her bow facing Masonboro Sound.