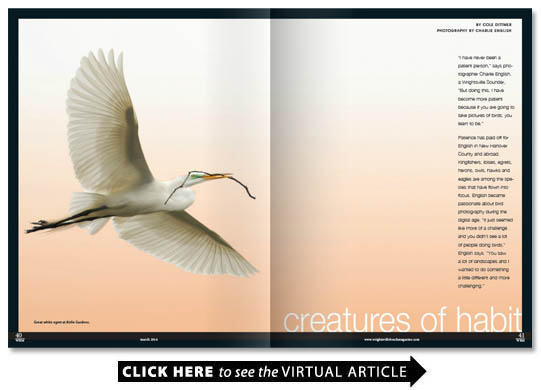 I have never been a patient person says photographer Charlie English a Wrightsville Sounder But doing this I have become more patient because if you are going to take pictures of birds you learn to be.

Patience has paid off for English in New Hanover County and abroad. Kingfishers ibises egrets herons owls hawks and eagles are among the species that have flown into focus. English became passionate about bird photography during the digital age. It just seemed like more of a challenge and you didnt see a lot of people doing birds English says. You saw a lot of landscapes and I wanted to do something a little different and more challenging.

English has been a photographer since eighth grade when he acquired a portable Kodak Instamatic camera but adjusting to the timing of the shutter speed and the weight of the lens required to capture birds took time. A background in hunting waterfowl helped significantly and now the Wilmington native says he much prefers hunting birds with his Canon EOS-1D X and his 500-millimeter lens rather than a shotgun.

It is similar to hunting and that is why I think I have gotten fairly proficient at shooting birds on the fly because I used to hunt a lot of birds when I was younger English says. I got tired of killing stuff though. I would just rather hunt all year long and all day long with my camera and I have a nice picture rather than a dead bird.

Early on an overcast morning English quietly stalks through his favorite local shooting grounds Airlie Gardens. Crouching he steals up on the lake knowing there is a pack of gadwall ducks hiding out in the corner. English says he will have a split second to get a shot if he approaches from a particular angle.

You can go to some place and scope it out for maybe a couple hours or so and just see what the birds are doing and where they land English says. Birds have a routine. They seem like they do the same thing at about the same time every day; and if you learn that you can usually set up somewhere and anticipate where they are going to be.

The gadwalls are hiding in their usual morning position and after a rustle of water the flapping of wings and rapid-fire click of Englishs shutter it is all over until he can sneak up on a couple of mallards he knows are at the other end of the lake.

Another of Englishs favorite subjects is a kingfisher that resides around a Wrightsville Sound pond. A territorial species the kingfisher usually stays close to Summer Rest pond but English says it took months of waiting to get one particular shot.

My best shot of him was probably in August of 2012 when I got two kingfishers locked together he says. I was determined to get a shot like that and I kept going over there and watching them but it took me four months before I finally got the one I wanted to get.

Waiting four months in a mobile hunting blind sometimes for three hours at a time English says he probably will not ever be able to get the shot again.

There are a lot of birds Im still after he says. I mainly get birds in some type of action like flying or fighting rather than birds just sitting on a log or stick � because that is kind of boring.

Instead of camouflage English says the key to capturing those dynamic images of birds is stealth and stationary posture.

I have gotten pretty good at being still English says. Most of the time you can stand up behind a tree and when you see something just dont move until you think you can throw the camera up and take a picture.

Like anything bird photography is mostly about repetition and practicing the skill he says.

Probably 25 percent of it is being observant and going out there and doing it and practicing is the other 75 percent he says. It keeps you moving and keeps you young. I walk at least two miles a day.

English says he could not imagine giving up photography.

Not unless I am unable to carry the lens and then I guess I will just ride around in the car and hold it out the window he says half joking. I just picked up a camera to try it and enjoyed it because you can make an image of anything. It gives you something to look back on when you get older.