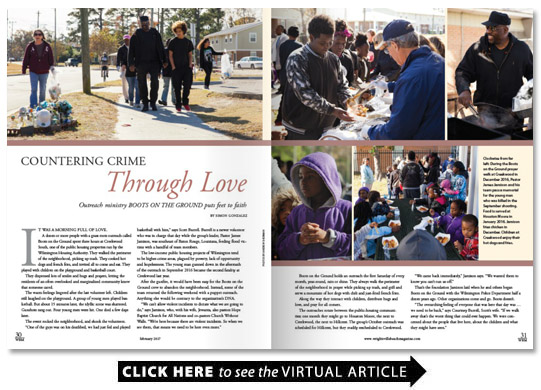 It was a morning full of love.

A dozen or more people with a grass roots outreach called Boots on the Ground spent three hours at Creekwood South one of the public housing properties run by the Wilmington Housing Authority. They walked the perimeter of the neighborhood picking up trash. They cooked hot dogs and french fries and invited all to come and eat. They played with children on the playground and basketball court.

They dispensed lots of smiles and hugs and prayers letting the residents of an often overlooked and marginalized community know that someone cared.

The warm feelings lingered after the last volunteer left. Children still laughed on the playground. A group of young men played basketball. But about 15 minutes later the idyllic scene was shattered. Gunshots rang out. Four young men were hit. One died a few days later.

The event rocked the neighborhood and shook the volunteers.

“One of the guys was on his deathbed we had just fed and played basketball with him ” says Scott Burrell. Burrell is a newer volunteer who was in charge that day while the group’s leader Pastor James Jamison was southeast of Baton Rouge Louisiana feeding flood victims with a handful of team members.

The low-income public housing projects of Wilmington tend to be higher-crime areas plagued by poverty lack of opportunity and hopelessness. The young man gunned down in the aftermath of the outreach in September 2016 became the second fatality at Creekwood last year.

After the gunfire it would have been easy for the Boots on the Ground crew to abandon the neighborhood. Instead some of the team returned the following weekend with a puppet outreach. Anything else would be contrary to the organization’s DNA.

“We can’t allow violent incidents to dictate what we are going to do ” says Jamison who with his wife Jewanta also pastors Hope Baptist Church for All Nations and co-pastors Church Without Walls. “We’re here because there are violent incidents. So when we see them that means we need to be here even more.”

Boots on the Ground holds an outreach the first Saturday of every month year-round rain or shine. They always walk the perimeter of the neighborhood in prayer while picking up trash and grill and serve a mountain of hot dogs with chili and just-fried french fries.

Along the way they interact with children distribute hugs and love and pray for all comers.

The outreaches rotate between the public-housing communities; one month they might go to Houston Moore the next to Creekwood the next to Hillcrest. The group’s October outreach was scheduled for Hillcrest but they readily rescheduled to Creekwood.

“We came back immediately ” Jamison says. “We wanted them to know you can’t run us off.”

That’s the foundation Jamison laid when he and others began Boots on the Ground with the Wilmington Police Department half a dozen years ago. Other organizations come and go. Boots doesn’t.

“The overarching feeling of everyone that was here that day was ‘we need to be back ‘” says Courtney Burrell Scott’s wife. “If we walk away that’s the worst thing that could ever happen. We were concerned about the people that live here about the children and what they might have seen.”

Commitment and consistency are the hallmarks of the team who are Christian Muslim Democrat and Republican working side by side for the greater good of the children Jamison says.

Jamison a former military policeman former city housing authority officer and current chaplain with the Wilmington Police Department is an imposing figure. He typically dresses all in black.

“He can come off as intimidating but once you know him he’s an awesome person. He’s a man of God ” says Glendora Mullins a community leader at Creekwood. “He kind of intimidated me a little bit at first. Now I love him. The community can see the positive that he brings. He will not give up on you. That’s what we need now love to show that people really do care.”

From the beginning Boots on the Ground was formed to go into dangerous areas and to make a difference to people living in at-risk areas.

“One day the chief of police called the African-American pastors into a meeting ” Jamison says. “He said ‘I need your help. I’m going to be straight up with you. A large percentage of the crime is happening in your community.’ He said ‘It only makes sense that you guys help.’ I appreciated his honesty. People will think it but he said it. It was the truth.”

“We started an initiative called Boots on the Ground ” he says. “It consisted of midnight basketball mentoring and community outreach. For the last six years we’ve been in the community just loving them making our presence known.”

The name came about by accident.

“We were in this meeting and I don’t like meetings ” Jamison says. “Everybody was talking: We can do this we can do that. I was ready to leave. I said ‘Let me tell you something right now. Unless you’re willing to put boots on the ground all of that stuff is pipe dreams.’ I was going to walk into the sunset. And somebody said ‘That’s right we’ll call it Boots on the Ground.'”

The roots go even deeper than that. Jamison grew up in Stamford Connecticut a place called Southfield Village. The police affectionately called it the Cage. He left town abruptly to join the military — to escape some violence he says.

Tough love from the military and mentors along his path helped him get straight. That’s what he wants to pass on in places like Creekwood where he has volunteered for more than 20 years.

“When I first started this was really in 1995 ” he says. “A lady in this community came to me and said ‘Pastor Jamison I’ve got to sleep on my floor at night for fear of being shot. What can you do?’ It brought tears to my eyes. I went and got seven men. We started walking the streets of Creekwood from 10 to 2 in the morning so that lady could sleep in her bed at night. We brought hot chocolate doughnuts and stuff and we fed the people. They were out here smoking weed so you know they wanted food. We’d feed them and love them. That was called Operation Nightshift.”

Jamison’s commitment and consistency have given his group credibility. When a hurricane left Creekwood without electricity for three days in October 2016 Jamison was right there with a team feeding people.

“Because we’re in the community so much when the power went out after Hurricane Matthew we were able to come in here at night and stay until 1 in the morning serving food without fear of any injuries or violence or anything ” he says. “It’s one of the perks of coming out and loving them constantly. You can come out at night. We have no reason to fear and they have no reason to feel threatened.”

It is a fact that crime and violence take place at Creekwood and the other public housing properties where Boots on the Ground operates.

But Jamison says it is overstated.

“Creekwood gets a bad rap ” he says. “There has always been more good than bad in these areas. I was head of security in these areas for 10 years. So I know what I’m talking about when I tell you that 80 percent of the people that do violence in this area don’t live here. It’s a mixture of gang-related and stupid.”

Cordia Sloan vice president of the Creekwood South Resident Association says Boots on the Ground helps with the crime problem just by its ongoing presence.

“This is a community we’re trying to take back from all the negativity that has been going on and happening out here ” she says. “It’s something we’re going to have to do together with their help. You see an organization like Boots on the Ground each time they come out there’s more and more people different people. The people here see we’ve got somebody to have our back.”

Boots on the ground does not hide the Christian character of the outreaches despite Muslim volunteers. Jamison and others pray boldly and loudly as the team walks through the community picking up litter. The garbage he says represents sin. The filled bags are prayed over then discarded symbolic of the power of Jesus Christ to overcome evil.

Many of the volunteers are from area churches — Jamison’s Hope Baptist First Baptist of Wilmington Global River New Hope and The River of Life Worship Center. During an outreach at Creekwood in December a mobile DJ played Christian music at high volume. On the day of the shooting for a time the basketball court had been filled with residents and volunteers line dancing together.

“We’re sharing the love of Jesus Christ through the power of the Holy Spirit and leaving the results to God. It’s all in His hands ” Jamison says.

He and his team optimistically see proof that Boots on the Ground is having a positive effect.

“These people know us they see us out here year after year we don’t change the quality of the food doesn’t change the message — Jesus loves you — doesn’t change. Children are growing up with us handing them hot dogs or a scoop of ice cream every few months. Their parents too. That counts for something ” adds one of Jamison’s long-term team members who prefers to stay out of the limelight. “We feed people we love them we hug them and we’re there to share a little light in a world that can be dark. At the end of the day it leaves a smile on your face and the desire to do it all over again.”

It starts with a willingness to help no matter the circumstances.