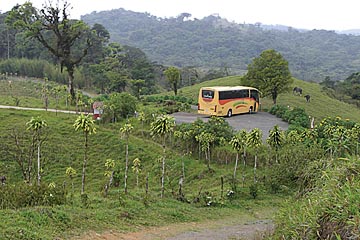 My trip began in the capital city of San Jose a direct four-hour flight from Atlanta. The citys national theater is one of the most beautiful historic buildings in the country and dates back to the 1890s. There is also a national museum and a surprisingly interesting little gold museum. Operated by the Central Bank of Costa Rica it houses an extensive collection of pre-Columbian gold artifacts as well as ancient pieces of jewelry coins and all kinds of tiny intricately made figurines animals and more.

My second day in Costa Rica I visited the Poas Volcano which is about an hour from San Jose (and 8 200 feet above sea level). It was an easy walk to the summits main crater which spews boiling sulphurous gases and acidic steam and boasts continuous mild activity. Poas Volcano has what is considered to be the largest active crater in the world and its lakes of molten sulfur are thought to be the only examples of their kind on earth. The surrounding park has cloud forest characteristics and is filled with a large-leafed plant called a “poor mans umbrella.” A steep challenging half-hour hike took me to the second crater inactive which now contains a beautiful cold-water lake Botos.

In the nearby province of Heredia our group enjoyed an hour-long tour of Britt Coffees working plantation and roastery. The tour included a stroll through the coffee farm an entertaining stage play a demonstration of the art of coffee tasting and of course a visit to the gift shop for samples. We learned that Costa Rica produces high-grade mountain grown Arabica beans. Britts decaf coffee production involves sending the beans to Germany where a high-tech water-based process removes the caffeine. The beans are then returned to Costa Rica to be sold or exported.

Throughout the 10-day trip our Costa Rican guide Shirley provided a wealth of interesting facts about her country. She enlightened us about politics wildlife volcanoes government and culture. There was no question she couldnt answer. Our driver Hector skillfully maneuvered our giant Mercedes motor coach around the countrys narrow winding sometimes steep roads. Id heard stories of bad roads and unmarked streets in Costa Rica so I was relieved to let someone else do the driving. At times we traveled along portions of the Pan-American Highway the 29 000-mile highway that runs from Alaska to Argentina.

Costa Rica has a president and a stable democratic government. In 1949 the military was abolished and the former military budget is now dedicated to security education and culture ensuring that Costa Ricans are well taken care of. The country utilizes hydropower has no income tax and boasts a 96 percent literacy rate free health care and mandatory free education. There is no welfare system. With 4.2 million residents mainly Christian in faith Costa Rica is about the size of West Virginia. Tourism is the countrys primary source of income followed by exported textiles microchips bananas sugar cane pineapple and coffee.

After two nights in San Jose we drove through the Braulio Carrillo National Park and rode the Rainforest Aerial Tram the first of its kind ever built. Open-air gondolas seating six people and a naturalist guide glided quietly along the rainforest floor. The return trip took us through the canopy of this rare protected ecosystem. During the one-hour ride I saw an abundance of flora fauna birds frogs and a live-in-the-wild anteater. We witnessed long lines of leaf-cutter ants carrying leaves two to three times their size! In order to protect this fragile rainforest during tram construction the trams giant steel support poles were gently lowered to the ground by Nicaraguan Sandinista helicopter pilots.

Anteaters behind us we drove north to Tortuguero packed small overnight bags for the two-night stay took an hour-long ride on an open-air boat and arrived at Pachira Lodge a rustic riverfront resort on the edge of Tortuguero National Park. We were greeted with a fruity welcome drink. I had my own tin-roofed cabin screened in and surrounded by a thick tropical forest. My room had a hot water shower comfortable clean beds a ceiling fan desk and electricity but no phone or TV which allowed me to enjoy the sounds of the jungle and rain outside. Each cabin had a porch with handmade leather rocking chairs.

Around 4:30 a.m. Pachira Lodge guests are awakened by groups of howler monkeys in the trees overhead. Heard from as far as two miles away howler monkeys make a very loud throaty growling noise unlike anything Ive ever heard. Some scientists claim theyre one of the loudest animals on earth! This display went on until almost 6 a.m. and was fascinating to witness … from a distance. After a wonderful buffet breakfast we boarded small boats with our naturalist guides and floated along nearby rivers and canals viewing wildlife and exotic plants. Among the animals I saw in Tortuguero National Park were herons anhingas caimans sloths iguanas hawks giant lizards toucans and monkeys. I spent my afternoon at the lodges beautiful tortoise-shaped pool. A Calypso band played in the evening.

On our second day there we visited the nearby village of Tortuguero where I saw the local uniformed schoolchildren and had the opportunity to go to the Green Turtle Research Station. In the late 1950s world-renowned biologist author and founding director of Caribbean Conservation Corporation Dr. Archie Carr began studying the nesting habits of turtles in Costa Rica. He quickly realized that these gentle animals were in peril and worked with the local people and government to protect them. His efforts led to new laws to protect the turtles a tagging program and what is now the longest running sea turtle research program in the world. Tortuguero is currently the largest green turtle nesting ground in the western hemisphere. The eco-conscious Costa Rican government prohibits anyone from keeping wild animals such as iguanas toucans lizards turtles and monkeys in captivity or as pets.

Leaving Tortuguero we drove through miles of banana plantations. In the 1890s immigrants from Italy China and Jamaica were brought to Costa Rica to build a railroad to transport bananas from the plantations to the coast. Descendants of these workers still live side by side in nearby provinces. “Living fences” are visible throughout this area and are constructed from live poro trees strung with barbed wire. Brahmin cows graze peacefully on lush grass throughout the country and chickens run freely on small farms and in tidy yards with tropical flowers and trees. Our guide explained that home ownership is the main goal of most proud hard-working Costa Ricans.

From Tortuguero we traveled west stopping briefly at the private rainforest reserve at Selva Verde where we walked across the long suspension bridge over the Rio Serapiqui. From there we drove on to the San Carlos Valley for a two-night stay at Arenal Manoa Hotel (in the shadow of the Arenal Volcano). Once again the food hotel and pool were wonderful. At dusk on our first evening our driver took us to the base of the volcano one of the 10 most active in the world. We saw hot red rocks catapulting down the mountain. In 1968 after sitting dormant for 400 years Arenal Volcano erupted destroying two villages. A few fortunate survivors fled to a nearby village now called La Fortuna.

On our last morning in the region we were taken to Cano Negro Wildlife Refuge where we again boarded a boat for a cruise this time on the Rio Frio. We saw crocodiles monkeys turtles birds and bats to name a few animals. We went to the Nicaraguan border and stopped to take photos. Later we spent the afternoon at Baldi Hot Springs Resort and Spa. The lush tropical complex features restaurants wet bars and 25 pools with thermal waters waterfalls and jacuzzis. Baldi Hot Springs was a real treat after days of sightseeing and riding in a bus!

Leaving this area we drove two hours on winding mountain roads to the Monteverde Cloud Forest region which straddles the Continental Divide. Cloud forests are similar to rainforests but have less rain more humidity and low-lying clouds. They have an abundance of mosses epiphytes and bromeliads. We took an easy hour-long guided hike seeing red bananas avocado trees hummingbirds leaf-cutter ants orchids and butterflies. I carried a plastic poncho in my bag all week and finally got a chance to use it during a brief rain shower. After the hike the site of our giant motor coach parked by itself at the edge of this vast quiet pristine cloud forest was certainly a contrast in cultures. Nearby was the Childrens Eternal Rainforest 54 000 acres preserved by an international effort which involved the participation and donations of schoolchildren around the world.

The last stop on the 10-day tour was Puntarenas. After our cloud forest hike we descended the mountains to the Pacific coast and enjoyed a relaxing two-night stay at the luxurious all-inclusive Hilton Doubletree Resort at Dona Ana Beach. Pools tiki bars beach entertainment water sports and elaborate buffets were available to guests. It was a great way to end the trip.

Finally on the way back to San Jose we stopped in the town of Sarchi to shop for genuine Costa Rican handicrafts such as the beautifully carved rosewood animals bowls and boxes. We saw brightly painted traditional ox carts used for centuries by rural farmers to transport their crops. We also made a brief stop in the quaint town of Grecia to visit its red metal church Cathedral de la Mercedes. Built in Belgium in the 1890s it was shipped to Limon Costa Rica in pieces and transported by ox cart to Grecia because they needed a church that could withstand earthquakes.

Costa Rica is an amazing environmentally friendly little country with a progressive government and hard-working citizens. It offers limitless outdoor adventures and spectacular scenery. The Costa Rican motto Pura Vida which means pure life is commonly used by locals throughout the country to say among other things “all is well.” And in Costa Rica it really is.