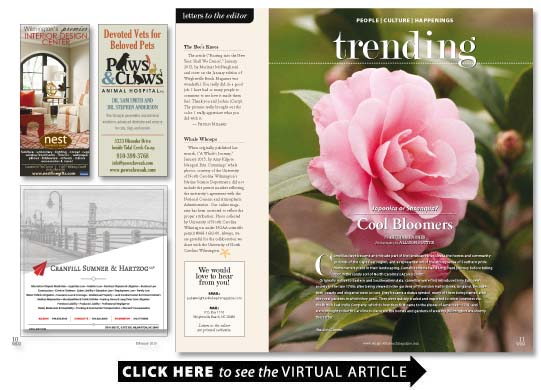 Camellias have become an intricate part of the landscape that cloaks the homes and community grounds of the Cape Fear region and a representation of the strong sense of Southern pride homeowners place in their landscaping. Camellia shrubs had a long hard journey before taking root in the sandy soil of North Carolina s Azalea Coast.

Originally native to Eastern and Southeastern Asia camellias were first introduced into European society in the late 1700s after being viewed in the gardens of Thorndon Hall in Essex England. Because their beauty and elegance were so rare they became a status symbol many of them being named after the royal gardens in which they grew. They were quickly traded and exported to other countries via the British East India Company which is how they first came to the shores of America in 1792 and were brought to North Carolina to decorate the homes and gardens of wealthy Wilmingtonians shortly thereafter.

Many of the varieties including some at the historic Burgwin-Wright House gardens in downtown Wilmington and the seaside estate of Pembroke and Sarah Jones now Airlie Gardens are well over 50 years old. With the popularization of at-home gardening clubs in the 1950s camellias which thrive during the temperate winters of eastern North Carolina and typically bloom between October and February became a popular flowering shrub for locals who like a year-round garden. Many Wilmingtonians began to share their love of gardening with each other often trading secrets and working together to build a like-minded community.

Soon after the popularization of these unofficial at-home meetups more established clubs such as the Tidewater Camellia Club formed. These clubs offered members the ability to meet with many other gardeners to share the love for the blossoms allowed enthusiasts to host and participate in local shows and later afforded them the opportunity to compete in regional and national shows much like the one that will be hosted at the New Hanover County Arboretum this month.

In other households cultivating camellias is a family tradition as it is for Wilmington resident Trudy Miller.

I remember tending to the flowers with my grandmother in North Jersey as a child and all throughout my adolescence and into college Miller recalls. So when I moved to Wilmington with my husband I asked my mother if I could take them with me. They have been planted at our house since we moved here nearly 20 years ago and they are something that I shared with my daughter and now get to share with my grandchildren.

Despite the limited space they had while moving Miller ensured her half of the camellias — Camellia sasanquas which would bloom in the fall just months after she moved were safely transported all the way from New Jersey. Years later while visiting family Miller s daughter was distressed upon seeing the lack of care given to the other camellias left behind and asked if they could take them home so that her mother could teach her to tend them properly. This added the Camellia oleifera variety to Miller s garden which can more easily sustain the cold northern winters. It was then Miller realized the practice of nurturing and maintaining the shrubs was something that she could and would share with her family and friends.

Miller isn t planning to enter this year s camellia competition but she is excited to go and see what everyone has put together.

It is wonderful to have events like these Miller says. They allow me to meet other people who have the same love and passion about these flowers as I do. I also love to hear their stories about how they started gardening — many of them also garden together as a family!

More than 1 000 blooms will be displayed during the 65th annual Tidewater Camellia Club Show at the New Hanover County Arboretum February 28. Visitors will no doubt have their favorites and the official judging will be done by representatives from the American Camellia Society. Plants will be available for purchase after 9 am. The show is free to the public from 1-5 pm. For more information call 910-509-1792 or visit the Tidewater Camellia Club website at www.tidewatercamelliaclub.org