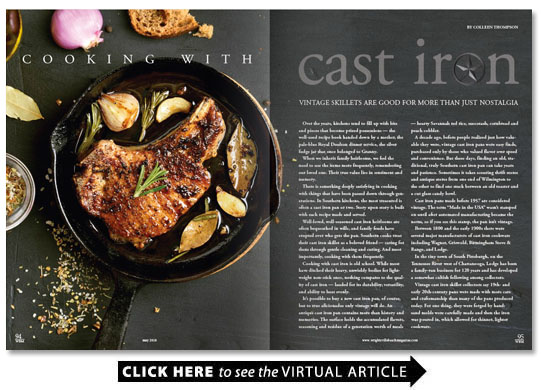 Over the years kitchens tend to fill up with bits and pieces that become prized possessions — the well-used recipe book handed down by a mother the pale-blue Royal Doulton dinner service the silver fudge jar that once belonged to Granny.

When we inherit family heirlooms we feel the need to use the items more frequently remembering our loved one. Their true value lies in sentiment and memory.

There is something deeply satisfying in cooking with things that have been passed down through generations. In Southern kitchens the most treasured is often a cast iron pan or two. Story upon story is built with each recipe made and served.

Well-loved well-seasoned cast iron heirlooms are often bequeathed in wills and family feuds have erupted over who gets the pan. Southern cooks treat their cast iron skillet as a beloved friend — caring for them through gentle cleaning and curing. And most importantly cooking with them frequently.

Cooking with cast iron is old school. While most have ditched their heavy unwieldy bodies for lightweight non-stick ones nothing compares to the quality of cast iron — lauded for its durability versatility and ability to heat evenly.

It’s possible to buy a new cast iron pan of course but to true aficionados only vintage will do. An antique cast iron pan contains more than history and memories. The surface holds the accumulated flavors seasoning and residue of a generation worth of meals — hearty Savannah red rice succotash cornbread and peach cobbler.

A decade ago before people realized just how valuable they were vintage cast iron pans were easy finds purchased only by those who valued flavor over speed and convenience. But these days finding an old traditional truly Southern cast iron pan can take years and patience. Sometimes it takes scouring thrift stores and antique stores from one end of Wilmington to the other to find one stuck between an old toaster and a cut glass candy bowl.

Cast iron pans made before 1957 are considered vintage. The term “Made in the USA” wasn’t stamped on until after automated manufacturing became the norm so if you see this stamp the pan isn’t vintage.

Between 1800 and the early 1900s there were several major manufacturers of cast iron cookware including Wagner Griswold Birmingham Stove & Range and Lodge.

In the tiny town of South Pittsburgh on the Tennessee River west of Chattanooga Lodge has been a family-run business for 120 years and has developed a somewhat cultish following among collectors.

Vintage cast iron skillet collectors say 19th- and early 20th-century pans were made with more care and craftsmanship than many of the pans produced today. For one thing they were forged by hand: sand molds were carefully made and then the iron was poured in which allowed for thinner lighter cookware.

The surfaces were also smoother. Some companies used proprietary techniques to make “mirror-polished” and “frosted” pans that had a sleeker shinier finish than modern-day cast iron pans. All of these methods made the pans easier to handle and season and therefore easier to cook with.

In 1707 Abraham Darby patented the sand casting method which is similar to the way cast iron is made today. Because of Darby’s contribution the 18th and 19th centuries saw a boom in cast iron cookware. They were so important to daily life that in his book “The Wealth of Nations ” Adam Smith says “They were worth more than gold.”

They were also expensive because of the blacksmith’s labor to forge each one. Manufacturing innovations eventually made them cheaper to produce and by the turn of the 20th century they became affordable and widely accessible.

The cast iron skillet has seen a resurgence in recent years. More cooks are realizing that Southerners have had it right all along and as the Teflon age dies off cast iron is still going strong.

Cast iron is known both for its ability to withstand high temperatures and its ability to hold heat for longer periods than standard cookware. This means it’s easier to prepare dishes similar to what’s served at favorite restaurants whether cooking beef poultry fish vegetables or cakes.

The biggest difference between cast iron and other metals is its heat capacity heat emissivity and conducting properties. Depending on what’s being prepared some suggest preheating cast iron cookware by starting at low temperatures giving more heat control when gradually raising it.

With every use the pan’s surface is renewed and even reinvented through the ritual of seasoning. Seasoning transforms the cold porous iron into a lustrous black surface that imparts complex flavors and becomes naturally non-stick.

Lodge and a few other new manufacturers make cast iron skillets that come pre-seasoned. Vintage cast iron pans even though they might have prepared thousands of meals need to be reseasoned regularly. Flaxseed oil is the most recommended these days while vegetable oil and shortening are also common.

How To Rejuvenate and Reseason a Cast Iron Skillet

Preheat oven to 375 degrees. Grease a 10-inch cast iron skillet. In a large bowl cream the butter and sugar together until light and pale about 2 minutes. Add the vanilla almond extract and egg. Beat to combine. In a medium bowl combine flour salt baking powder and baking soda. Add half of the flour mixture to the butter mixture and combine. Add half of the buttermilk and stir to combine. Repeat procedure once more until all of the flour mixture and buttermilk have been combined. Spread batter into prepared skillet. Arrange sliced strawberries on top pressing down gently. Sprinkle the top of the batter with sliced almonds and dust with powered sugar.Bake until the top is golden about 35 minutes.

In a large bowl beat 1 cup heavy whipping cream until frothy. Add 2 Tbsp sugar (honey or coconut nectar can be substituted) and beat until peaks form. Refrigerate the cream until ready to serve. Serve warm slices of cake with dollops of whipped cream.