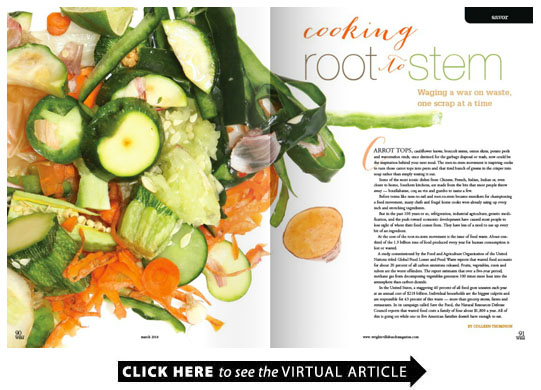 Carrot tops cauliflower leaves broccoli stems onion skins potato peels and watermelon rinds once destined for the garbage disposal or trash now could be the inspiration behind your next meal. The root-to-stem movement is inspiring cooks to turn those carrot tops into pesto and that tired bunch of greens in the crisper into soup rather than simply tossing it out.

Some of the most iconic dishes from Chinese French Italian Indian or even closer to home Southern kitchens are made from the bits that most people throw away — bouillabaisse coq au vin and gumbo to name a few.

Before terms like nose-to-tail and root-to-stem became monikers for championing a food movement many chefs and frugal home cooks were already using up every inch and stretching ingredients.

But in the past 100 years or so refrigeration industrial agriculture genetic modification and the push toward economic development have caused most people to lose sight of where their food comes from. They have less of a need to use up every bit of an ingredient.

At the core of the root-to-stem movement is the issue of food waste. About one-third of the 1.3 billion tons of food produced every year for human consumption is lost or wasted.

A study commissioned by the Food and Agriculture Organization of the United Nations titled Global Food Losses and Food Waste reports that wasted food accounts for about 20 percent of all carbon emissions released. Fruits vegetables roots and tubers are the worst offenders. The report estimates that over a five-year period methane gas from decomposing vegetables generates 100 times more heat into the atmosphere than carbon dioxide.

In the United States a staggering 40 percent of all food goes uneaten each year at an annual cost of $218 billion. Individual households are the biggest culprits and are responsible for 43 percent of this waste — more than grocery stores farms and restaurants. In its campaign called Save the Food the Natural Resources Defense Council reports that wasted food costs a family of four about $1 800 a year. All of this is going on while one in five American families doesn’t have enough to eat.

One of the primary reasons for consumer waste is a disconnect between people and where their food comes from says Durham journalist Jonathan Bloom the founder of Wastedfood.com and author of “American Wasteland.” In his book he explores the various reasons food is wasted from farm to fork. Food that doesn’t meet our expectations of how it’s supposed to look is overlooked or passed over and ends up in a landfill.

The fresh produce from supermarkets (rather than farmers markets) has already been tidied and trimmed to make it look pretty and easier to handle. As supermarkets display perfect produce we forget what untouched vegetables look like and what to do with the whole thing. If we’re presented with a sprouty green carrot top we throw it away.

End Food Waste a nonprofit started by food activist Jordan Figueiredo launched a campaign called the Ugly Fruit and Veg Campaign to highlight that 20-40 percent of all produce that goes to waste is because of strict grocery store cosmetic standards. He successfully petitioned Whole Foods Market and Walmart to start selling less-than-perfect produce at a discounted price and adopt the philosophy that there is nothing wrong with “imperfect” produce.

Restaurants are the second-biggest food waste culprits with the average restaurant producing 150 000 pounds of garbage each year. France Italy and Spain recently recognized the issue requiring all edible food from restaurants and supermarkets to be donated to charities rather than sent to the landfill. Many local restaurants and grocery stores contribute food that’s just slightly past the sell-by date to food banks on a voluntary basis.

Adventurous chefs are turning what used to be scraps into delicious plates of food and are starting to elicit change. The movement goes by various names — root-to-stem root-to-fruit farm-to-fork. Whatever it’s called it’s raising awareness and encouraging the use of entire fruits and vegetables.

In the process chefs are creating new flavors and textures while dramatically reducing waste. From saut�ing leafy green carrot and beet tops in olive oil to dehydrating mushroom stems to turn into powders or simmering wilted celery back to life with white wine reductions and aromatics committed cooks are forging a new path.

Dan Barber chef and co-owner of Blue Hill restaurant in Manhattan and author of “The Third Plate ” launched a series of pop-up restaurants called wastED in New York and London to highlight the plight of food waste. He introduced diners to an off-the-wall but clever menu essentially compiled of scraps and rejects alongside celebrity chefs like Alain Ducasse Gordon Ramsay and Yotam Ottolenghi. Appearing on his menu were burger patties made of fruit pulp a “garbage salad” of stems and leaves and coffee made from an infusion of husks.

Chefs are part of a wave of activists leading the charge and inspiring consumers to think about waste and cook more sustainably. Anthony Bourdain’s documentary “Wasted! The Story of Food Waste” features high-profile chefs like Danny Bowien Massimo Bottura and Mario Batali highlighting the urgency of food waste and demonstrating potential ways to help solve the problem and continue the conversation.

Their collective message is to shop smarter. Plan meals ahead of time. Always shop with a list. Buy local seasonal food. Cook at home. Choose ugly produce. Use scraps. Use the freezer. Compost leftovers.

What To Do with Those Scraps

Beet Greens: Thinly slice and add raw to a salad or add to soups and stews. They’re also great in green smoothies combined with zesty citrus fruits like pineapple.

Celery Leaves: Chop up in a salad or add to smoothies and soups or any soup/stew stock.

Corn Cobs: Simmer with onion and carrot to make a great stock for corn chowder.

Broccoli Stalks: Add to broccoli soup for additional nutrients and a punch of bright green color. They can also be grated and tossed into slaw or sandwich wraps or added to green juice.

Cauliflower Leaves: Slice and saut� in butter or olive oil with diced onion for a delicious side dish or use in stir-fries.

Citrus Peels: Candy or use as zest. Add strips to simmering fruits for a bright fresh taste.

Onion Tops: Saute and use for stir-fries or toss them raw in salads or sprinkle on top of soups.

Potato Skins: Bake to make chips. Scrub them well and spread the peels on an oiled cookie sheet. Drizzle with olive oil sprinkle with salt and bake at 450 degrees for about 15-20 minutes.

Asparagus Ends: Use in cream of asparagus soup.

In a food processor add the greens garlic nuts cheese and lemon juice then pulse. Add the olive oil and blend together. Taste and season with salt and more lemon juice if needed. Serve with crudit� dollop onto pasta or spread onto crostini.