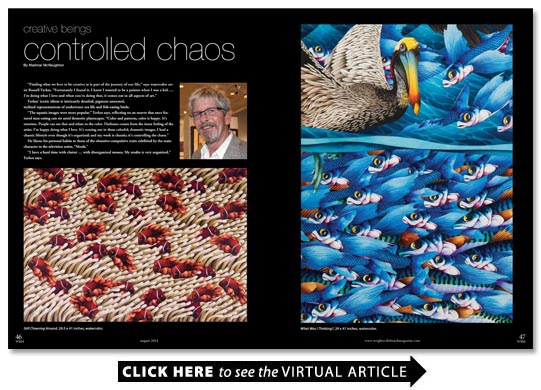 Finding what we love to be creative at is part of the journey of our life  says watercolor artist Russell Yerkes.  Fortunately I found it. I knew I wanted to be a painter when I was a kid. I m doing what I love and when you re doing that it comes out in all aspects of art.

The aquatic images were more popular  Yerkes says reflecting on an oeuvre that once featured man-eating cats set amid domestic plantscapes.  Color and patterns color is happy. It s emotion. People can see that and relate to the color. Darkness comes from the inner feeling of the artist. I m happy doing what I love. It s coming out in these colorful dramatic images. I lead a chaotic lifestyle even though it s organized; and my work is chaotic; it s controlling the chaos.

He likens his personal habits to those of the obsessive-compulsive traits exhibited by the main character in the television series  Monk.

I have a hard time with clutter — with disorganized messes. My studio is very organized  Yerkes says.

His regime is routine driven.

When it comes to painting I have a mission to get through a certain point. My large paintings can take four to six weeks and even two to three months  Yerkes says.  When I leave the studio I m thinking about what I m going to be doing tomorrow.

A Virginia Beach Virginia native Yerkes was a career roofer. He fell into the art world more than 20 years ago when he was contracted to repair a co-operative gallery s leaking roof.

The next day I met with them about showing some of my work. They were in awe of what I was doing with watercolor  he says.

He finished 16 paintings for his one-man show the following year. He sold three pieces on opening night. The show was extended for a second month. His first wife served him separation papers. A developer bought the remaining inventory when the show closed. Episodic chaos gave way to a major turning point for Yerkes.

After painting in studios in Norfolk Virginia and having his work featured in the city s daily newspaper he retreated to Ocracoke and Hatteras islands in the early 1990s. After achieving some recognition from the Dare County Arts Council he relocated to Kitty Hawk. His work hangs for sale in Greenleaf Gallery in Duck and during annual exhibits of the Watercolor Society of North Carolina for which he has served as president on three different occasions since 1998.

When he s not in the studio Yerkes travels to eight to ten annual outdoor art shows like the New World Festival of the Arts in Manteo August 13-14.

People walking the shows sometimes think they are looking at photographs he says.

I ve taken liberties with the shapes and color and added personality. Some of the fish images have eyelids. People don t notice  he says.

A keen observer of human nature Yerkes watches the way people look at his work.

You can tell who the painters are. They get up real close and start analyzing. I make a choice other painters make a choice. Do you want to get up and address them and give them some secrets? Part of our success is to share secrets  he says.

His images today are more refined than they were 20 years ago the edges are harder he says.

With watercolor you make mistakes whether they re good or bad  Yerkes says. Drops appear in some older paintings that he never tried to fix.

To me they were messy. Today they re clean  he says.  I m focused more today than I was in the beginning. There s a lot of clarity — now.