Complex Art and a Fascinating Life 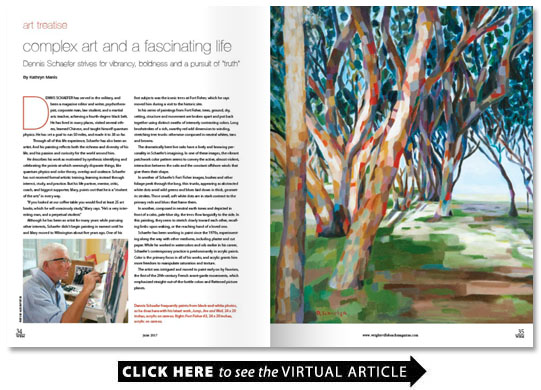 Dennis Schaefer has served in the military and been a magazine editor and writer psychotherapist corporate man law student and a martial arts teacher achieving a fourth-degree black belt. He has lived in many places visited several others learned Chinese and taught himself quantum physics. He has set a goal to run 50 miles and made it to 38 so far.

Through all of this life experience Schaefer has also been an artist. And his painting reflects both the richness and diversity of his life and his passion and curiosity for the world around him.

He describes his work as motivated by synthesis: identifying and celebrating the points at which seemingly disparate things like quantum physics and color theory overlap and coalesce. Schaefer has not received formal artistic training learning instead through interest study and practice. But his life partner mentor critic coach and biggest supporter Mary points out that he is a “student of the arts” in every way.

“If you looked at our coffee table you would find at least 25 art books which he will voraciously study ” Mary says. “He’s a very interesting man and a perpetual student.”

Although he has been an artist for many years while pursuing other interests Schaefer didn’t begin painting in earnest until he and Mary moved to Wilmington about five years ago. One of his first subjects was the iconic trees at Fort Fisher which he says moved him during a visit to the historic site.

The dramatically bent live oaks have a lively and knowing personality in Schaefer’s imagining. In one of these images the vibrant patchwork color pattern seems to convey the active almost violent interaction between the oaks and the constant offshore winds that give them their shape.

In another of Schaefer’s Fort Fisher images bushes and other foliage peek through the long thin trunks appearing as abstracted white dots amid wild greens and blues laid down in thick geometric strokes. These small soft white dots are in stark contrast to the primary reds and blues that frame them.

In another composed in neutral earth tones and depicted in front of a calm pale-blue sky the trees flow languidly to the side. In this painting they seem to stretch slowly toward each other recalling limbs upon waking or the reaching hand of a loved one.

Schaefer has been working in paint since the 1970s experimenting along the way with other mediums including plaster and cut paper. While he worked in watercolors and oils earlier in his career Schaefer’s contemporary practice is predominantly in acrylic paints. Color is the primary focus in all of his works and acrylic grants him more freedom to manipulate saturation and texture.

The artist was intrigued and moved to paint early on by Fauvism the first of the 20th-century French avant-garde movements which emphasized straight-out-of-the-bottle colors and flattened picture planes.

For these painters color did not have to be naturalistic. Rather than restrict their understanding of it to a component of representation the Fauvists believed that color could stand alone on a canvas as an independent element indicating mood or creating compositional balance and structure.

Andre Derain co-founder of the Fauvist movement described the painting style and philosophy as volatile and explosive: “For us Fauvism was like an ordeal by fire � our paints became sticks of dynamite. They were supposed to explode with light.”

Famous Fauvist works like Matisse’s “Le Bonheur de Vivre” (The Joy of Life) and Derain’s “Mountains at Collioure” do seem to vibrate with an intensity of color and emotive quality akin to an explosion.

Inspiration from the Fauves is evident in all of Schaefer’s works which feature vibrant saturated colors and manipulated dimensions and space. His series from Fort Fisher echoes Derain’s understanding of color.

In these and several others Schaefer’s style takes inspiration from another painting technique developed around of the turn of the century called Pointillism. This technique made popular by Georges Seurat involves the creation of an image out of several unconnected dots. It relies on the ability of the eye to piece together the pattern and read it as a whole.

The Fauvists often used pointillism as it allowed them to give color rather than naturalism a central role in the creation of the image.

Schaefer works almost exclusively from black-and-white photographs one of many techniques that allows him to focus on color.

“Ninety-five percent of the time I work from black-and-white photos so I am almost always creating the entire color world from the beginning ” he says. “Since I’m using color to portray texture depth cold warm I have an arsenal of variety to express those things.”

Though the salt marshes and the trees at Fort Fisher spoke to him Schaefer is typically more likely to paint portraits than landscapes. He is increasingly interested in the interactions between human and natural subjects in his pieces.

“Sometimes when I’m painting people a lot of different people emerge; as I continue to work they become something or someone else from when I started ” he says. “The painting undergoes a lot of metamorphosis. I hope it has the significance of the original image but still reflects my interpretation.”

Many of his portraits also demonstrate an interest in mid-century culture philosophy and life and range from dramatic or mysterious to domestic. They depict famous boxers and musicians as well as individuals who are not individually recognizable.

One of these images titled “Mid-Century Woman ” depicts Schaefer’s subject in shoulder pads and pearls staring boldly out at the viewer. In her green and navy dress with dangerously bright red fingernails the woman seems mysterious and confident. With a cigarette in her hand and an abstract painting hanging behind her the subject gazes with borderline disinterest at the viewer she knows is watching.

Schaefer more explicitly blends his emerging interest in landscape and human subjects in a recent painting titled “Chasing the Light ” inspired by a photo taken by a friend of a group of bike riders on a cloudy spring day in Oregon. Though it carries the same bright primary color palette and geometric brushstrokes of his other work this painting is softer. The cloudy sky blends slowly into the waving brown and red grass which seems to jerk as quickly in the wind as the speedy bikers split through it. It is simultaneously contemplative and active.

Henry Miller who wrote “Tropic of Cancer” and is known as a breaker of literary and social boundaries. Miller was also a prolific painter producing some 2 000 watercolors during his lifetime which can be seen in galleries and museums in the United States Japan and Europe.

While stationed in California in the 1970s near Miller’s Big Sur home Schaefer determined to send the author-painter a work of his eventually deciding on a painting of a historical figure. The note he received in return the artist remembers with a chuckle read: “Dear Friend that painting you sent me is atrocious.”

“That was appealing to me ” Schaefer says. “I’d rather have someone react in an emotional way to my work than with disinterest.”

“I have this concept — I’ve looked at art for over 30 years looked at thousands of paintings — and there is a certain thing that draws me to a work of art ” he says. “It’s not so easily identifiable so I call it truth. I see some truth even in children’s and abstract art; it is an intangible thing that gets communicated from the artist to the viewer. Since we’ve been in this area I’ve started selling and exhibiting and I get people who say that it speaks to them they like it for the same reason I do they know what I’m trying to say. It is such a satisfying and profound moment when people see whatever this intangible thing is. It makes me really happy.”

In many ways Schaefer is just getting started. While he has been an artist his whole life it is only in recent years that he has been able to devote the time he would like to his evolving style and practice.

The trajectory and evolution of his recent body of work reveals a painter for whom art is life whose images are full of energy life and passion. A pursuit of truth and beauty is immediately apparent in Schaefer’s works. Featuring bold colors heavy-handed lines and planes complex compositions and traces of the welcoming enthusiastic person behind them the artist’s paintings catch the eye and captivate the mind.