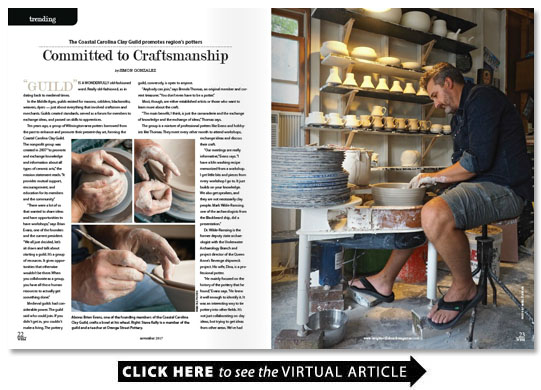 In the Middle Ages guilds existed for masons cobblers blacksmiths weavers dyers — just about everything that involved craftsmen and merchants. Guilds created standards served as a forum for members to exchange ideas and passed on skills to apprentices.

Ten years ago a group of Wilmington-area potters borrowed from the past to enhance and promote their present-day art forming the Coastal Carolina Clay Guild. The nonprofit group was created in 2007 “to promote and exchange knowledge and information about all types ofceramic arts ” the mission statement reads.”It provides mutual support encouragement and education for its members andthe community.”

“There were a lot of us that wanted to share ideas and have opportunities to have workshops ” says Brian Evans one of the founders and the current president. “We all just decided let’s sit down and talk about starting a guild. It’s a group of resources. It gives opportunities that otherwise wouldn’t be there. When you collaborate as a group you have all these human resources to actually get something done.”

Medieval guilds had considerable power. The guild said who could join. If you didn’t get in you couldn’t make a living. The pottery guild conversely is open to anyone.

“Anybody can join ” says Brenda Thomas an original member and current treasurer. “You don’t even have to be a potter.”

Most though are either established artists or those who want to learn more about the craft.

The group is a mixture of professional potters like Evans and hobbyists like Thomas. They meet every other month to attend workshops exchange ideas and discuss their craft.

“Our meetings are really informative ” Evans says. “I have a kiln washing recipe memorized from a workshop. I get little bits and pieces from every workshop I go to. It just builds on your knowledge. We also get speakers and they are not necessarily clay people. Mark Wilde-Ramsing one of the archaeologists from the Blackbeard ship did a presentation.”

Dr. Wilde-Ramsing is the former deputy state archaeologist with the Underwater Archaeology Branch and project director of the Queen Anne’s Revenge shipwreck project. His wife Dina is a professional potter.

“He mainly focused on the history of the pottery that he found ” Evans says. “He knew it well enough to identify it. It was an interesting way to tie pottery into other fields. It’s not just collaborating on clay ideas but trying to get ideas from other areas. We’ve had Andi Steele the sculpture instructor at UNCW. A lot of people at first were like ‘Why are you bringing somebody who doesn’t do clay in here?’ It’s all related. If you gain skills in one area it helps you with your skills in another area. Just from seeing that presentation a bunch of ideas were sparked in my head.”

“It all starts with Hiroshi ” Evans says. “Hiroshi is totally instrumental in this. He got us all interested in clay. Every Wilmington potter has been influenced by Hiroshi one way or another.”

Hiroshi taught on a barge on the Cape Fear River for a year before moving to the Hannah Block Community Arts Center in 1982. Evans who has an art degree from Indiana University in Pennsylvania became one of his students in 1995 a year after moving to Wilmington.

“I was away from art for a couple of years and I decided it’s time for me get back into it ” he says. “I called the professor for sculpture at UNCW at the time and said ‘Is there any place in Wilmington that a person like me that’s already graduated can take sculpture?’ He said ‘I don’t know about sculpture but there’s this guy downtown at the Community Arts Center that’s teaching pottery and he’s really good.’ I met him and could tell how passionate he was about it. He got me hooked.”

Other teachers joined Hiroshi over the years and in 2007 they broke away from the community college to form a nonprofit teaching studio in the Community Arts Center. They called it Orange Street Pottery after the location of the Hannah Block building.

“We were a group of people who wanted to give back to the community ” Thomas says. “We wanted to keep prices low.”

A nonprofit teaching studio to encourage even more people to take up pottery led to discussions about forming a guild. Word went out about a meeting for all interested potters at the Cameron Art Museum.

“We thought maybe 10-15 people would come ” Thomas says. “There were about 50-60 people the first night. Now we’re up to 100. Probably about one-third are professionals. There are a lot of wannabe professionals. They are just beginning up-and-comers. We are getting more young people which is great.”

Potters and would-be potters of all ages are welcome but the longtime members are especially pleased when young people join. Although it wasn’t the original intent part of the guild’s purpose has become to keep the art form alive and pass it down.

“I’m getting this vibe from a lot of professionals that they are worried that the next generation is not going to step up and they are afraid that craft shows and just artists in general are going to die off ” Evans says. “It’s exciting to see young people join the guild and want to do it professionally.”

The guild continues to grow even without the person who made it happen in the beginning. Hiroshi is still the vice president but health issues have forced him to step back.

“We were worried when Hiroshi left it would wane but I think people still feel his connection ” Evans says.

The connection comes through people like Evans once a pupil and now one of two teachers at Orange Street Pottery along with Steve Kelly. The passion for pottery gained from Hiroshi is now passed on through his students.

All of the guild members can display their wares during the annual holiday show and sale scheduled to take place at the Community Arts Center the first weekend in November.

In keeping with the nonprofit character of the organization some proceeds from the show go to a local charity. Members also create and donate vessels for Empty Bowls which takes place every two years. The next one is scheduled for March 2018.

Guild members created many of the 1 500 or so bowls for the 2016 fundraiser. Patrons eat a lunch of soup bread and dessert and then take home one of the handcrafted bowls. The 2016 event raised more than $46 000 to support Good Shepherd Center and Mother Hubbard’s Cupboard.