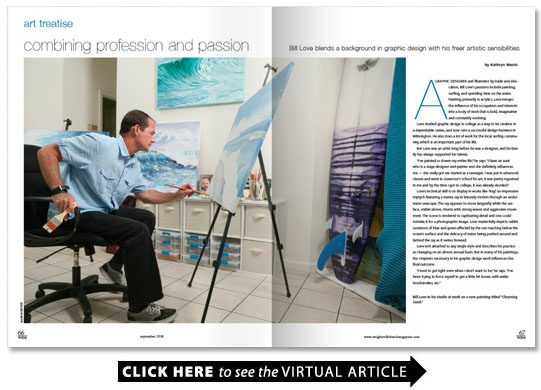 A graphic designer and illustrator by trade and education Bill Love’s passions include painting surfing and spending time on the water. Painting primarily in acrylics Love merges the influence of his occupation and interests into a body of work that is bold imaginative and constantly evolving.

Love studied graphic design in college as a way to be creative in a dependable career and now runs a successful design business in Wilmington. He also does a lot of work for the local surfing community which is an important part of his life.

But Love was an artist long before he was a designer and his family has always supported his talents.

“I’ve painted or drawn my entire life ” he says. “I have an aunt who is a stage designer and painter and she definitely influences me — she really got me started as a teenager. I was put in advanced classes and went to Governor’s School for art; it was pretty ingrained in me and by the time I got to college it was already decided.”

Love’s technical skill is on display in works like “Ray ” an impressive triptych featuring a manta ray in leisurely motion through an underwater seascape. The ray appears to move languidly while the surface visible above churns with strong waves and aggressive movement. The scene is rendered in captivating detail and one could mistake it for a photographic image. Love masterfully depicts subtle variations of blue and green affected by the sun reaching below the ocean’s surface and the delicacy of water being pushed around and behind the ray as it swims forward.

Love isn’t attached to any single style and describes his practice as changing on an almost annual basis. But in many of his paintings the crispness necessary in his graphic design work influences the final outcome.

“I tend to get tight even when I don’t want to be ” he says. “I’ve been trying to force myself to get a little bit looser with wider brushstrokes etc.”

Pieces like “Blue Crab Abstract” and “Herding” demonstrate Love’s ability to merge stylistic interests. In the former Love employs a color palette of blue green and yellow to create a blended swirling interior for the painting’s namesake creature. The thin swirling paint application simultaneously flattens the animal and increases the composition’s sense of movement. White paint is applied throughout for highlight and contrast and the background has a sponge-like texture that recalls sea foam. These abstracting techniques soften the lines between representation and impression allowing the artist and the audience to interpret as well as view the content.

The ocean figures prominently in just about everything Love does including his painting practice.

“A majority of what I do is ocean-related ” he says. “I grew up on the ocean and surfing is a big priority for me. When I see wildlife out there on the water I come home and start researching it. And that’s where a lot of my painting inspiration comes from.”

Love spends a lot of time researching and sampling images before he begins a sea life piece and he jokes good-humoredly that anatomy was not part of his degree program.

In works like “The Falls” and “Storm Front ” his admiration and love for the ocean is particularly apparent.

Love’s paintings frequently feature hard precision tight brushstrokes and fine line work but in “Storm Front” he relaxes control a bit. Darkened waves in the foreground crash loosely and violently on the sand while storm clouds entering the scene from the top right corner seem to move quickly and ominously. The high contrast of light and dark shades grant drama and intensity to the work. The resulting image represents the ocean as an impressive almost foreboding entity soothing and beautiful and faintly dangerous.

His oeuvre contains many images of the ocean often of beautiful rising swells inspired by his time spent surfing. It’s a lifestyle he says is hard to explain but powerful involving a combination of calm transcendence and exhilaration. The complex experience is depicted in some of his more abstracted paintings like “Tempest ” “Sunrise Surf ” and “New Born.”

In these works creative color palettes gestural brushstrokes and interesting light variation encourage the viewer to read the image not as a realistic interpretation of a scene but as a window into an emotion or experience. Each painting employs levels of abstraction paint applications and line techniques and each tells a slightly different story about the ocean the environment and the human experience.

“Tempest” utilizes a nearly monochromatic color scheme of darker blues white and a touch of green. The paint is applied in an impasto style and the surface texture is active thick and layered mimicking the waves themselves.

The tone is moody and contemplative whereas the bright primary color palette of “New Born” suggests something rejuvenating or inspirational. Love’s brushstrokes are drip-like thin and wild following the swell of the waves and movement of the surrounding water. The perspective is not entirely clear and the viewer could interpret the angle as an aerial or profile view. The composition’s lines and motion coalesce near the center of the canvas drawing the eye down and into the vibrant energetic moment.

Wrightsville Beach is of special importance for Love who lived in the area for about 15 years.

“I had to move off of the island but I will be going back ” he says. “I started out surfing Carolina Beach until I finally saw what Wrightsville Beach water looks like; it’s pretty much the most beautiful I’ve seen on the East Coast.”

His affinity for the area is memorialized in works like “The Oceanic ” a sprawling scene depicting the iconic restaurant where it sits on the coastline perched atop short dunes. Love paints the structure beneath an impossibly blue sky; shallow waves break on craggy rocks in the background and a strong wind blows the sand and sparse beach foliage.

Love cites elaborate detailed pieces from the Baroque and Rococo periods and notable examples of wildlife artwork among his diverse inspirations. But one of his most significant influences is iconic illustrator and painter Norman Rockwell.

Rockwell dropped out of high school early and studied at Chase Art School the National Academy of Design and the Art Students League. This technical education would serve him throughout his illustrious career.

While he is best known for his paintings of American life during the early 20th century he also painted portraits of notable U.S. figures — including four presidents — and tackled issues of racism and human and civil rights particularly in the post-World War II period. In his lifetime Rockwell was dismissed by many as overly simplistic and sentimental; to this day he is often disparagingly referred to as an “illustrator ” not an “artist.” But Rockwell famously did not take offense to this. The wildly successful artist liked to think of himself as an illustrator depicting aspects of the world around him that were otherwise unnoticed.

As Rockwell intentionally blended the related fields of design illustration and painting in his life and career Love is figuring out how to balance those elements in his own practice. Design and painting have been difficult to separate but he’s working on engendering a bit more distance.

“The design work definitely affects my painting. I’m trying to break the two apart to kind of relearn how to paint ” he says. “The big difference with painting is that I’m doing it for fun so I want to try to reconcile the different mediums.”

Love’s work is exciting for a lot of reasons but especially because it is exploratory and features a wide stylistic range. His pieces appeal to beach lovers as well as art enthusiasts looking for contemplation and nuanced reflection.

While he certainly has plans for where his art is going Love is always open to the unexpected.

“A lot of mistakes end up being the best part of the painting ” he says. “I just like to start with something and see where it goes.”