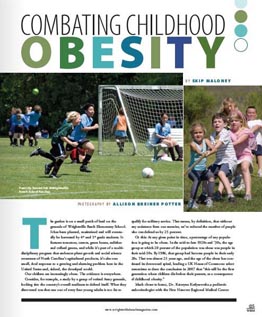 The garden is on a small patch of land on the grounds of Wrightsville Beach Elementary School. It has been planted maintained and will eventually be harvested by 4th and 5th grade students. It features tomatoes carrots green beans radishes and collard greens and while it’s part of a multi-disciplinary program that embraces plant growth and social science awareness of North Carolina’s agricultural products it’s also one small local response to a growing and alarming problem here in the United States and indeed the developed world.

Our children are increasingly obese. The evidence is everywhere.

Consider for example a study by a group of retired Army generals looking into the country’s overall readiness to defend itself. What they discovered was that one out of every four young adults is too fat to qualify for military service. That means by definition that without any assistance from our enemies we’ve reduced the number of people who can defend us by 25 percent.

Or this: At any given point in time a percentage of any population is going to be obese. In the mid-to-late 1920s and ’30s the age group at which 20 percent of the population was obese was people in their mid-50s. By 1986 that group had become people in their early 20s. That was almost 25 years ago and the age of the obese has continued its downward spiral leading a UK House of Commons select committee to draw the conclusion in 2007 that “this will be the first generation where children die before their parents as a consequence of childhood obesity.”

Much closer to home Dr. Kateryna Kotlyarevska a pediatric endocrinologist with the New Hanover Regional Medical Center (NHRMC) estimates that approximately 30 of the 100 or so young patients that her department sees every month are there for issues related to obesity and/or associated health problems — like diabetes asthma high blood pressure and cardiovascular concerns.

Let’s talk wallets and pocketbooks. It is estimated that the annual national cost of childhood obesity in this country is $11 billion for children with private health insurance and $3 billion for those with Medicaid. And that’s just the tip of the financial iceberg. A recent study revealed that the cost of obesity-related diseases is $147 billion annually; that’s more than $400 million dollars every day. In the time it’s taken you to read this far it’s cost more than a quarter million dollars.

“The current epidemic of childhood obesity will be a serious threat to population health for at least the next several decades ” says Professor G.A. Mitchell of the University of Montreal in an introduction to the findings of an international symposium published in the International Journal of Obesity (2007).

The good news is that the problem has been clearly identified which is always the first step toward a solution. The bad news is that it’s going to take a lot more than a fresh vegetable garden at Wrightsville Beach Elementary School to solve it (though that is a wonderful start).

According to Dr. Kotlyarevska (not to mention the dictates of common sense) it’s not a problem that was created yesterday nor will it be solved tomorrow. The root of the problem is the continued presence in the bodies of modern men and women of what Kotlyarevska describes as “thrifty genes ” part of the bio-chemical makeup of our ancestors that emphasized storing food but which are now out of step with our current lifestyles and eating habits.

“Hundreds of years ago ” Kotlyarevska says “when food was scarce people with a slower metabolism could survive better … because they stored fat better (because of their thrifty genes). Now in modern society there is not as much of a physical effort to get food. We’re all buying food at the grocery store so we’re all heavier.”

Obesity in both children and adults disproportionately affects those in lower income brackets. The obesity rate is six times higher for children covered by Medicaid who have reduced access and sometimes none at all to healthy food.

Thankfully for all of us who in one way or another are affected by this problem whether or not we are the parents of an obese child the campaign to reverse this childhood obesity trend has not only been picked up and endorsed by the First Lady of the United States Michelle Obama — she has developed a program to deal with it. Her “Let’s Move” initiative announced in February is not just a strong message from a prominent personality but a focused action plan that lays out four essential building blocks for a solution.

“We want to improve the information and tools that parents need to make the changes that are desired in their families ” the First Lady says in an introductory video on the “Let’s Move” website (www.letsmove.gov). “We want to improve the quality of food in our schools … improve access and affordability of healthy foods … and increase physical education for kids. We need to get them moving. “Let’s Move” is going to take families out of their isolation and give them the nationwide support that they need in a whole range of industries to get their kids on track to live healthier lives eat right get more exercise and get ready to face the challenges of the future.”

“Let’s Move” has proposed a wide variety of initiatives in each of the four areas including a partnership with major sports franchises among the nation’s professional sports leagues to promote the program’s exercise component.

“THANK YOU Michelle Obama ” says Imer Smith Director of the Child Nutrition Department of the New Hanover County school system. “(She) has been a big help. Finally (this issue) is getting some attention. We’re trying to use that attention as a springboard.”

According to Smith the framework for many of these initiatives is already in place.

“For years and years ” Smith says “the US Department of Agriculture (USDA) has set guidelines as to how many saturated fats vitamins sodium and trans-fat (are either recommended or allowed) and we do meet all nutritional requirements.”

In fact she adds the state of North Carolina with an “Eat Smart Move More” initiative of its own has stricter guidelines than those established by the USDA.

Health Issues in the Here & Now

While it’s comforting to know that well thought-out efforts are (and have been) underway to address the roots of the problem it’s important to remember that as the information-laden pamphlets emanating from the “Let’s Move” program go to press children right here in New Hanover County in Wilmington in Wrightsville Beach up and down the Cape Fear Coast are dealing with obesity-related health problems that need to be addressed right now.

Doctor Brian Heer of Sito Chiropractic has seen a sharp increase in the number of obesity-related consultations as have many of his colleagues.

“There’s a huge upsweep in the market ” Heer says. “I know a chiropractor in Charlotte who gave up chiropractic altogether to focus on weight loss.”

Part of the immediate problem according to Heer is an inability on the part of patients or the parents of patients to connect the dots between the health issues that drive them to seek chiropractic care (pain back problems etc.) or whatever kind of care they seek and the obesity that underlies these very problems. Recently Heer treated a 14-year-old girl who weighed more than 200 pounds. She was not brought to Heer by her mother to treat the obesity. He was consulted to “fix” the back pain which neither the girl nor her mother seemed to understand was related to her weight.

“She came in three times in a row and I couldn’t even move her ” said Heer. “Her spine felt like she was 60 years old. My job is to get her spine right but somebody’s got to be the one to put the buzz in her ear.”

Putting the “buzz in someone’s ear” requires a more subtle approach than talking about eating healthy foods and living active lifestyles because the message needs to be as non-judgmental as the calorie count for broccoli or the idea of 60 minutes of exercise a day. There is nothing more apt to turn people away from information than being made to feel guilty about not being in possession of that information in the first place. Even referring to someone as “fat” can have a damaging effect.

“Fat is not a Body Mass Index (BMI) definition ” says Chaundra Klein a nutritional therapist with the Chrysalis Center for Counseling and Eating Disorder Treatment in Wilmington. “It’s used as a derogatory term.”

“It’s a cruel word ” Klein says “and usually what drives behavior change is when people talk amongst themselves with compassion and empathy. One of the number one emotions that drives people to eat is guilt and you just make it worse by being derogatory.”

Steps to A Lasting Solution

Addressing childhood obesity has to begin with parents for as Klein says “it’s not the kids pulling up to the drive-in window of the fast food restaurants. The parents need to be role models and they’re not.”

While concurring that parents are central to a lasting solution Janice Williams the 4th and 5th grade teacher at Wrightsville Beach Elementary School who oversees the garden sees the need to address other influences as well.

“One of the primary influences is commercialism ” Williams says. “The McDonalds and the Burger Kings and the toys they offer with the favorite movie characters … this speaks directly to the children. They should be held accountable or at least be made aware that these types of commercials are leading kids ” she said. “The kids don’t want those apple slices that are listed as part of a healthy menu they want those fries.”

If Williams had the power and influence to change one thing she would steer the balance of children’s diets away from fast foods.

“More opportunities for children to have fresh-farmed products every single day as a part of their lives ” Williams says. “I think that would make a big difference. I’m talking about apples and bananas (among other things) as a fundamental building block of their day that they didn’t even have to think about. When children are able to make the choice between fresh fruit and processed fruit fresh fruit will win every time.”

In fact Williams notes students who would normally not be inclined to even get near a collard green do so at the school when they reap their harvest from the garden and prepare an annual meal around Thanksgiving. The kids thanks to King Neptune Restaurant which joins the festivities and prepares the collard greens are inclined to eat the food they’ve grown.

It’s a small step but it’s one that the children are taking.

Parents and/or children interested in this issue are fortunate because in light of its recognized severity vast amounts of information are available. Start with a visit to Michelle Obama’s “Let’s Move” Website (www.letsmove.gov). The International Journal of Obesity can be found at www.nature.com/ijo/index.html. While some information that appears in this regularly published journal is highly scientific it does contain articles of interest to the average reader like a recent story demonstrating that depictions of the Last Supper over the past millennium have increased plate and food serving size at that supper by significant amounts.

A child health Website www.kidshealth.org offers interested folk a Body Mass Index chart. Answer a few questions fill in a few blanks and the function will offer a finding:
kidshealth.org/parent/food/weight/bmi_charts.html

Using a Search engine to seek out items listed under Childhood Obesity will elicit approximately three million sites in less than a second. Knowledge is power.

The author would like to acknowledge the use of multiple sources for information included in this report including but by no means restricted to The New York Times The International Journal of Obesity and Michelle Obama’s Let’s Move.gov Web site. See sidebar for further information and resources.