Colorful Art for a Happy Home

From pet portraits to still-life bouquets, Daisy Faith incorporates drips of florals and vibrant colors that add a touch of spring to any space 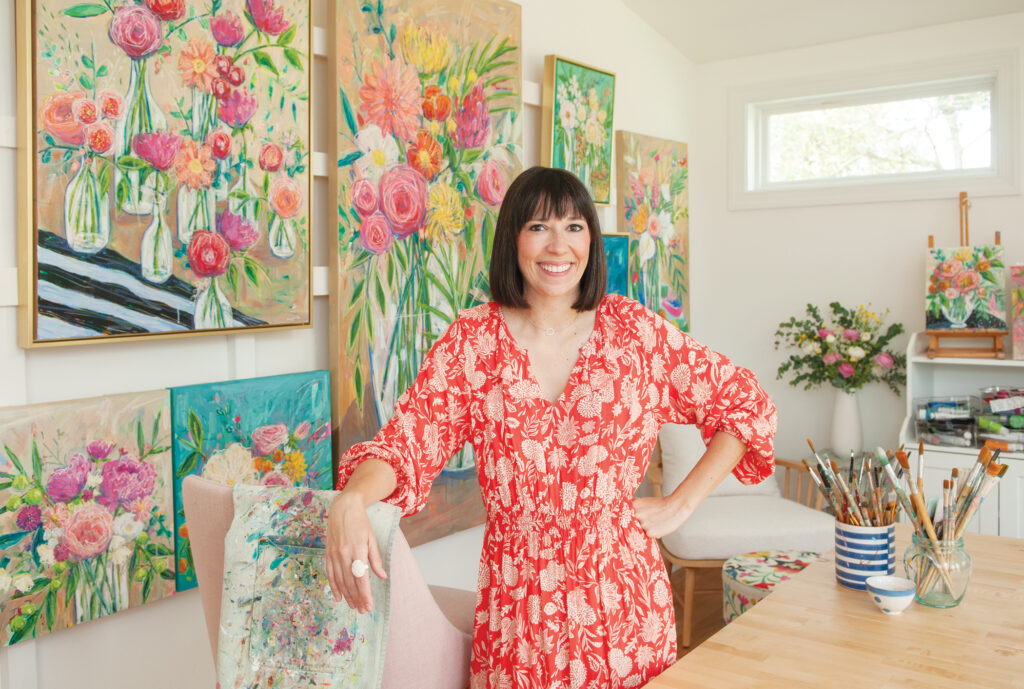 Daisy Faith sits in her home studio in Wilmington. A recent piece is propped on a small side table next to a bushel of eucalyptus in a white vase. One can’t help but feel that somehow this art was designed for this exact space. That perhaps this would make a swoon-worthy Instagram post, whether it be design or art focused.

Faith’s background in interior design (which she earned a degree in) commingles with her love of art.

“When I paint or envision it in a space, I see the whole space,” she says. “I’m not just painting, I see it styled. My ideal customer is someone who loves color.”

Customers who own a Daisy Faith piece don’t have to run to the store and pick up a fresh bouquet. They only need to glance at their wall and get the same effect.

Her work recalls artists such as Matisse, who fabulously crafted still life with a burst of personality. Or Monet, whose body of work comprised some 2,500 pieces but is best known for practicing and perfecting his main subject, water lilies.

Think of Monet, and a clear vision likely emerges. Much of Faith’s art is centered around trying to establish a similar reputation.

“I gave myself a strict focus to create a consistent portfolio,” she says. “Before that I was painting what people asked me to paint. I think you do have to establish a brand, what you want to be. When someone says, ‘I want a colorful flower painting, I want my dog painted,’ you want them to think of you.”

Decorating a room can involve statement pieces like a hunter green velvet couch and bohemian rug alongside accents like white linen curtains and plants in decorative vases. For balance and a focal point, art ties the space together, giving it a persona furniture cannot. Faith exudes this in not just her work or subject, but in the way she styles her social media and website photos. She establishes her brand and sets up her art as not an idea but a tangible object that can really make a space.

On We Go Together Like Peanut Butter and Banana (part of her Florist Bench collection), an acrylic aqua underpaint adds thick textured layers, applied with one of her favorite tools, a palette knife. Two vases hold sprawling greenery to add a touch of wild among a delicate peony, three daisies, ranunculus and various flowers. A lone orange seems to have strayed too far from its gold bowl to the right. It all exudes organizational chaos, a methodology understood by a florist, painter, designer and homeowner.

While most of her work is acrylic, she adds final touches with both Prismacolor soft pastels and fine line applicators.

“I use applicators for line work, I like to add a lot of texture,” Faith says. “I like to be somewhat improv about it and somewhat listen to the canvas. I don’t want to plan it out too much. I’m very type A and a perfectionist, but I’m trying to let go. That’s the most fun of painting for me is you can let go and get into the flow.”

For styling, Faith photographed the piece among dried white flowers, propped on a wooden table and situated on an easel. It sets the scene of not only making a bouquet or of decorating, but how it could work in your exact space.

For All My Golden Girls (part of the same collection) features a tribe of various sized bouquets on a black and white striped table. A neutral beige background lets various subjects neither overpower nor overwhelm, instead exuding a freeing feeling like the smell of tulips on a spring day or a vase of freshly cut flowers propped in front of an open kitchen window.

In Surprise Trip to Hawaii (part of the Big and Bold collection), a royal blue background adds depth to a vase filled with florals and greenery and sprinkles of light blue flowers. Purple brushstrokes radiate that summer lapse between sunset and night. While Faith makes art for a happy home, there’s also art for diverse personalities who prefer navy to cyan.

When not painting florals, many of her commissions revolve around pet portraits. She originally tested the flower crown method on a painting of her own dog, Henry, finding a niche incorporating two of her favorite things. Whether a dog, cow or elephant, the subjects display raw emotion and personality.

“The eyes, it’s looking into the soul,” she says. “I get really into it and I connect with the photo I’ve been given. It’s all about getting those eyes right. Sometimes I’ll get 20 photos of the same dog then really pick the position and focus on the eyes and the emotion.”

While always an artist, she spent time in Los Angeles as an actress, landing speaking roles on shows including Pretty Little Liars and How I Met Your Mother. Later, owning a paint and sip studio in Redondo Beach paved the way for learning the ins-and-outs of business ownership. After returning to Wilmington in 2019 with her husband, she decided to pursue her art as a career.

Her brand veers towards the aesthetics of Instagram. Paintings aren’t just depicted as-is, they are decorated and styled among a polka dot throw pillow, pink chair and wooden table. Her #30dayswithfloralfriends challenge birthed a new style of work featuring famous faces including Ruth Bader Ginsburg, Kamala Harris and Frida Kahlo, their hair draped in rich florals with strands poking out. A wide, heart-shaped face and round eyes create a distinction to the work, cementing it as a Daisy Faith.

For 2021 she is aiming big, seeking a wider audience with canvas reproductions, prints on thick watercolor paper, and even stickers.

She’s also literally going big with large-scale, 36 x 72-inch canvases. On the Florist’s Bench sold in two days and Growing to New Heights made the perfect statement piece for a historic downtown home.

“Painting at that scale is so freeing and it’s such an impact to that space,” Faith says.  “I painted one that’s at a historical home in downtown with a huge 20-foot staircase and my painting is hanging right there and it’s such a big focal point.”