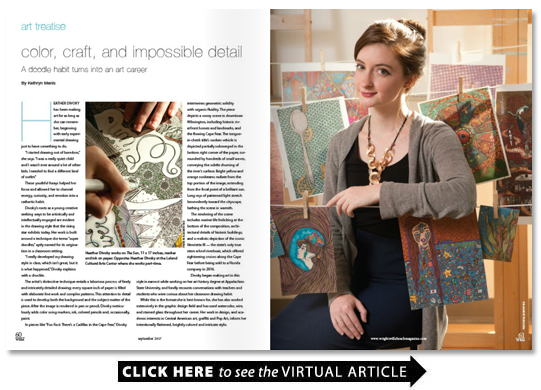 Heather Divoky has been making art for as long as she can remember beginning with early experimental drawing just to have something to do.

“I started drawing out of boredom ” she says. “I was a really quiet child and I wasn’t ever around a lot of other kids. I needed to find a different kind of outlet.”

These youthful forays helped her focus and allowed her to channel energy curiosity and emotion into a cathartic habit.

Divoky’s roots as a young creative seeking ways to be artistically and intellectually engaged are evident in the drawing style that the rising star exhibits today. Her work is built around a technique she terms “super doodles ” aptly named for its origination in a classroom setting.

“I really developed my drawing style in class which isn’t great but it is what happened ” Divoky explains with a chuckle.

The artist’s distinctive technique entails a laborious process of finely and intricately detailed drawing; every square inch of paper is filled with elaborate line work and complex patterns. This attention to detail is used to develop both the background and the subject matter of the piece. After the image is rendered in pen or pencil Divoky meticulously adds color using markers ink colored pencils and occasionally paint.

In pieces like “Fun Fact: There’s a Cadillac in the Cape Fear ” Divoky intertwines geometric solidity with organic fluidity. The piece depicts a sunny scene in downtown Wilmington including historic riverfront homes and landmarks and the flowing Cape Fear. The tongue-in-cheek title’s sunken vehicle is depicted partially submerged in the bottom right corner of the paper surrounded by hundreds of small waves conveying the subtle churning of the river’s surface. Bright yellow and orange sunbeams radiate from the top portion of the image extending from the focal point of a brilliant sun. Long rays of patterned light stretch benevolently toward the cityscape bathing the scene in warmth.

The rendering of the scene includes marine life frolicking at the bottom of the composition architectural details of historic buildings and a realistic depiction of the iconic Henrietta III — the state’s only true stern wheel riverboat which offered sightseeing cruises along the Cape Fear before being sold to a Florida company in 2016.

Divoky began making art in this style in earnest while working on her art history degree at Appalachian State University and fondly recounts conversations with teachers and students who were curious about her classroom drawing habit.

While this is the format she is best known for she has also worked extensively in the graphic design field and has used watercolor wire and stained glass throughout her career. Her work in design and academic interests in Central American art graffiti and Pop Art inform her intentionally flattened brightly colored and intricate style.

In many of her recent drawings Divoky experiments with three-dimensional space. Incorporating delicate wire and pieces of foam board into her practice she creates literal depth in a composition whose density makes three-dimensionality a challenge. These additions have also allowed her to create more explicit demarcation between foreground and background.

“I think the three-dimensionality adds a lot visually ” she says. “Details pop out more and it is a way for me to experiment with space.”

In “What’s Beneath Wrightsville Beach” (on the cover) Divoky brings the ocean to life using this technique. The drawing features a family of vibrantly colored seahorses as they dart between churning strands of bright green seaweed. The background is composed of hundreds of small circles of varying sizes indicating bubbles and water in motion. Each tiny component is a carefully chosen shade of blue and the overall effect adds dimension and kinetic energy to what would otherwise be negative space. The animal and plant life is given prominence through small pieces of foam board allowing them to rise slightly above the background. Divoky subtly weaves the two picture planes together with lightweight wire. The composition extends her affinity for flatness and pattern into new media and artistic platforms.

The piece also showcases a love for the Carolina coast rekindled after traveling studying and painting abroad.

“When I first moved back from Holland I got really into sea and aquatic life and experimenting with materials that would make the paper pop ” she says. “This led to a strong desire to do something representative of the beaches that I grew up on. I think of Wrightsville as bright and bubbly and I took a lot of my color palettes from driving down Wrightsville Beach and seeing the colors of the houses.”

While “What’s Beneath Wrightsville Beach” is solidly anchored in her home state Divoky who completed a master’s in art history in the Netherlands has been personally and professionally shaped by her travels and studies. These experiences and her extensive background in historical art are influential in the impulse to focus on geography and sense of place in many of her drawings.

She traveled as an undergraduate to Mexico and studied ancient Central American iconographic style an extension of her interest in Mayan Aztec and Incan design. Divoky was drawn to the dichotomy of this ancient artwork which relies simultaneously on flatness and incredibly intricate detail. The influence of these experiences and her historical research is evident in the geometry and graphic quality of Divoky’s compositions as well as the subject matter of many of her pieces.

Her fascination with pattern detail and bright color palettes is seen in “Dream House ” which shows the influence of desert geography and aesthetics. This piece depicts a quaint home interior through three window-like vignettes. Small woven stairs connect each room. Over a backdrop of rustic woven fibers and bright yellow flowers the domestic space comprises softly drawn patterns and organic color schemes with several variations on green and blue jewel tones.

The piece was largely inspired by plant life the artist encountered in Mexico.

“The place we stayed in in Mexico was beautiful ” she says. “And I’ve always liked the idea of living in a plant house — so I based this piece on the plant life I saw there.”

The artist gives the viewer a glimpse into a daydream. Focusing on intimate domestic locales — a bedroom bathroom and eclectically decorated living room — this drawing possesses a calming comforting quality. It is easy to imagine the warm dry air and vast horizon that surround this quiet space.

Divoky’s passion for history can be seen in works that borrow from cultural myth and legend. Our primary knowledge base for many prehistoric and ancient cultures comes from the study of works of art and Divoky invests many hours in researching her desired subject matter before beginning a piece in these series.

In preparation for a project on the heavens for example she read resources that ranged from “Astronomy for Dummies” to official NASA reports on constellations putting hours into learning everything she could about the cultural and scientific significance of the stars. She used the same approach to complete series of images representing mythological creatures and wonders of the ancient world.

Over the course of her career she has developed an iconography of her own. The artist’s original system of pattern and symbol includes flora and fauna in images that speak to femininity and strength and a complex web of geometric allusion and historically influenced repetition.

Divoky has worked in the arts as a curator historian designer and administrator most recently at the Leland Cultural Arts Center. Her work is influenced by interactions with local artists and art lovers.

“What informs me most are the students and seeing the art shows that happen there ” she says. “We have a new artist every month and it has been really interesting seeing the different artists and styles that are featured. Leland doesn’t have a lot of outlets for art so seeing that and how locals interact with it has been incredibly informative.”

Divoky often gives back to the community and many of her exhibitions and events include a benefit component. Recently she exhibited “In Memorium: 500 Bees” for a solo exhibition at Bottega in downtown Wilmington. The event raised awareness and funds for the Pollinator Partnership a nonprofit devoted to the protection of vital bee populations. She created 500 individual bee magnets designed in her uniquely intricate and colorful style with fragile blue wings that recalled stained glass.

Through her work viewers gain access to an imaginative inquisitive and energetic mind. Her pieces provide never-ending detail and compelling historiography and each richly detailed image bears witness to the artist’s vitality intelligence and skill.